This photo is actually a postcard that reads, “Main Street, Onchiota, N.Y.,” showing Tormey’s IGA store. Someone had written on the back of the card, “1940s.” However, to the left of the big truck in the picture is a 1951 Ford. (Photo from the town of Franklin archives) 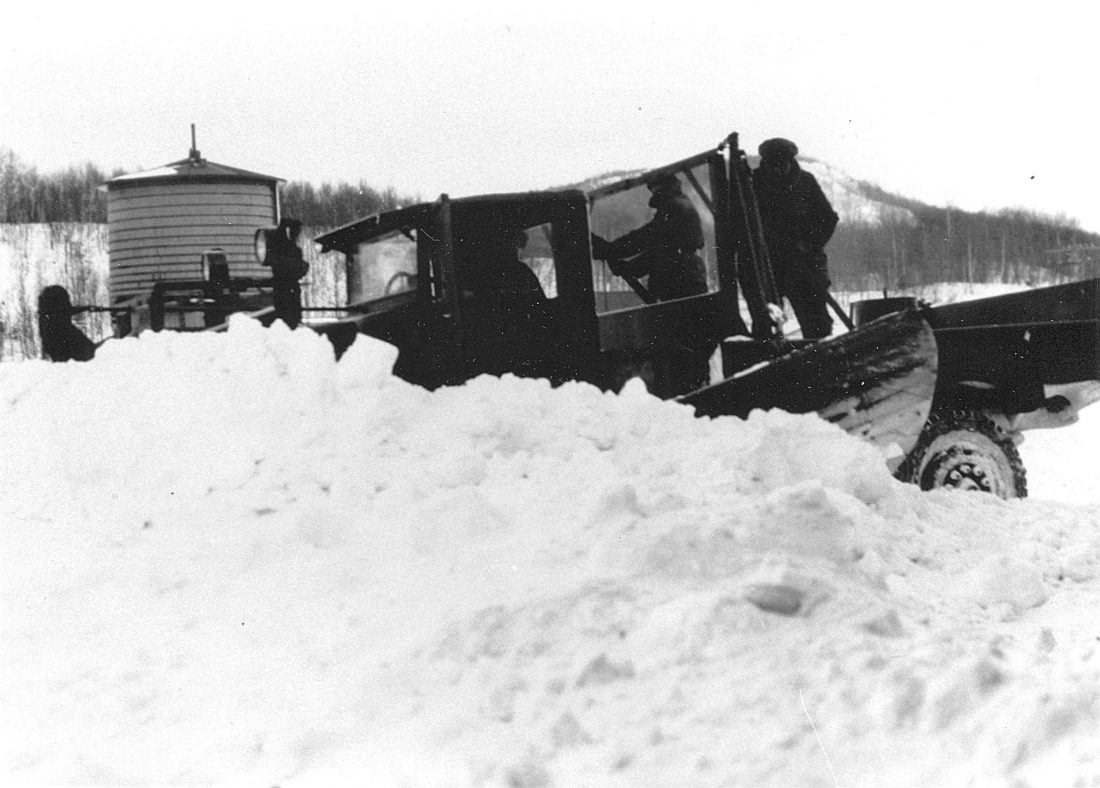 Franklin is one of the biggest towns in Franklin County, 175 square miles, as described in last week’s column.

The Franklin town line is at the top of County Line Hill (as it was always known) as one leaves Bloomingdale, the town of St. Armand and Essex County. The town of Franklin continues on Route 3 14.5 miles to the town line of Black Brook and Clinton County.

Many hamlets make up the town, which way back in time were the most populated regions of the town. Merrillville, for instance, was dominated by the Loon Lake Hotel surrounded by beautiful private homes. It rivaled any of the big summer resorts back then such as Saranac Inn and Whiteface Inn — not in size but in popularity. My sisters Rita Littlefield and Marguerite Ellithorpe worked there as waitresses one summer. Dorm-like housing was provided for the help at all of those resorts. Those resorts were the biggest employers in the region … for at least a couple of months.

Across Route 3 from Merrillville was Alder Brook, Sugarbush and Union Falls. Alder Brook was pretty much settled by Father Richard O’Donnell’s St. Rose of Lima Parish, and Irish immigrants flocked there as they came through Canada. That is where the Keegans and Dillons, my great-grandparents, settled when they arrived from Ireland.

Onchiota was also a busy community (see Phil Fitzpatrick’s book, “Onchiota Remembered”) when the Tormey family and their store was always the center of the community for socializing. I have ties all around the town of Franklin. Bing Tormey and my brother Ray were brothers-in-law, marrying, respectively, Eunice and Patricia Tyler from Vermontville. The Tyler family goes way back in town history. In the 1930s their dad, Hubert, was superintendent of highways, and later their brother Hubert “Sonny” Tyler was a Franklin town justice. 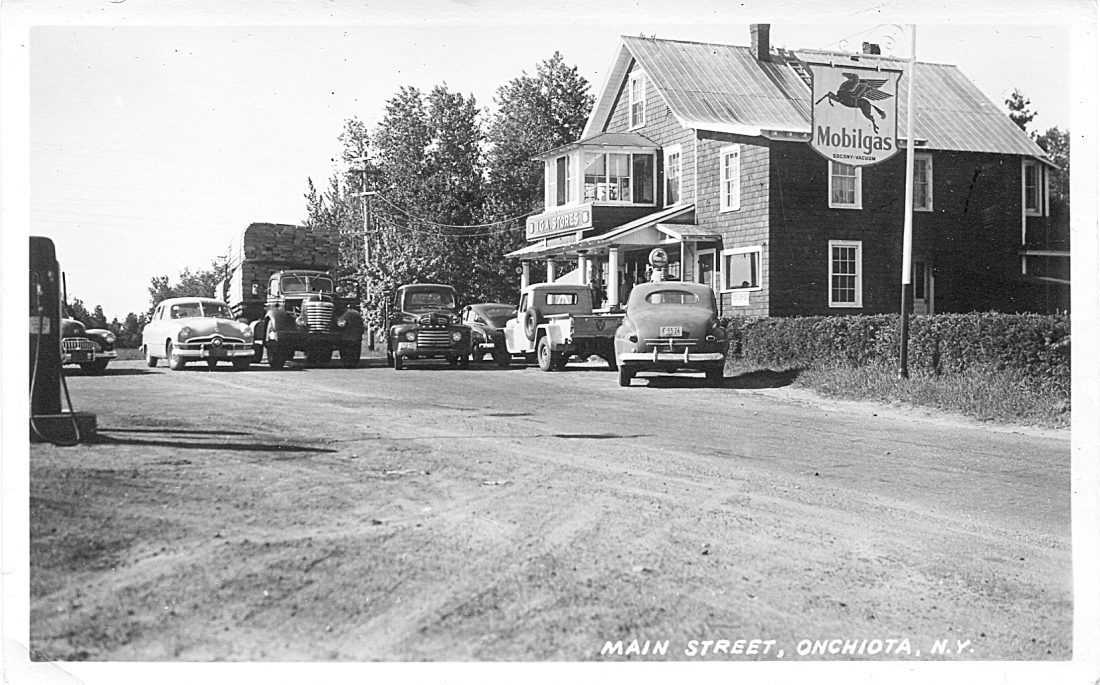 This photo is actually a postcard that reads, “Main Street, Onchiota, N.Y.,” showing Tormey’s IGA store. Someone had written on the back of the card, “1940s.” However, to the left of the big truck in the picture is a 1951 Ford. (Photo from the town of Franklin archives)

Then, of course, Rainbow Lake, a minor stop on the New York Central Railroad heading for its big destination Stony Wold. You all may have heard of my famous cousin Francis Hogan, the postmaster there for the last 100 years or so.

Lake Kushaqua is more known for its history as Stony Wold Tuberculosis Sanatarium than as the seminary for the White Fathers. I have a picture of my mother, Elizabeth McKillip Keegan, posing with Kathleen Black Carson (later Mrs. Mark Carson) when they were waitresses at Stony Wold in 1918. 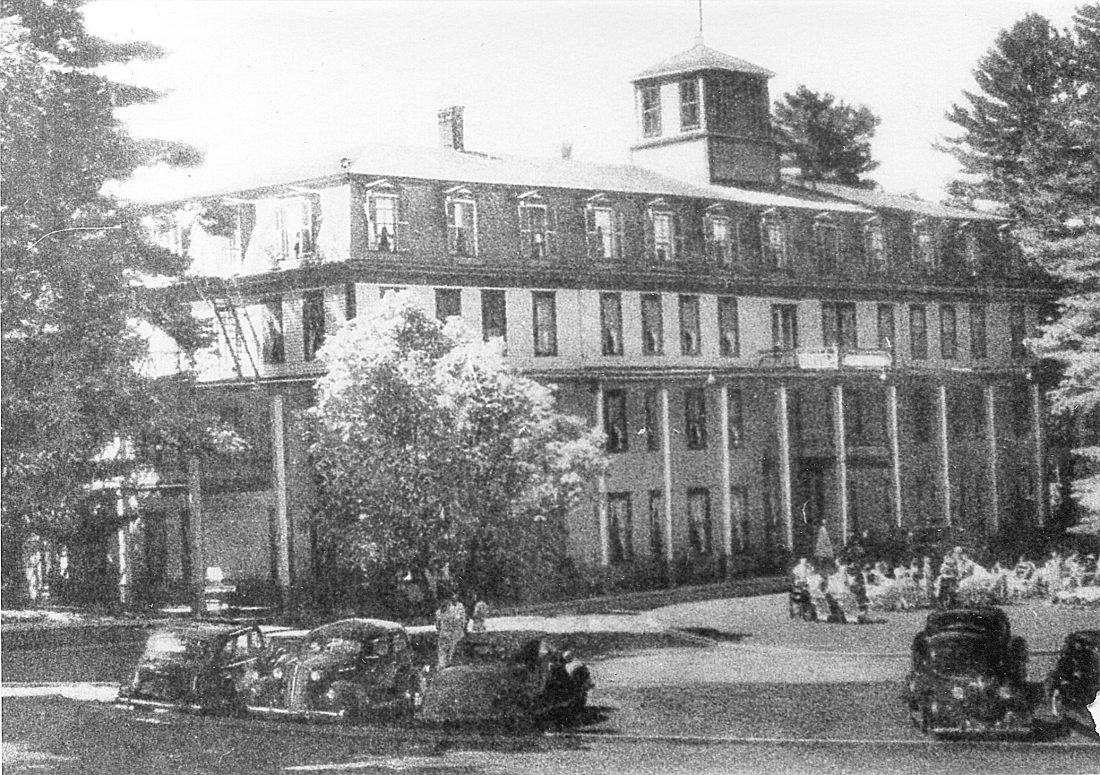 My references are the archives of the town of Franklin and “The History of St. Lawrence and Franklin Counties,” published in 1853.

In 1853 the town of Franklin was already prominent, because on page 234 of that treasured book is this information: “Hugh Martin, of Franklin, Guy Meigs, of Malone, and Buel H. Man, of Westville, appointed plank road inspectors.”

Imagine traveling by buggy around the county — doing your job inspecting the roads: “Let’s see, we need 10 new planks on the main road to Chateaugay, four planks in Onchiota and only two at Hunter’s Home. Buel. You got that all written down?”

When Franklin County was formally created in 1808, Presidents Thomas Jefferson and John Adams were still alive. Both died on the same day, July 4, 1826. The county was named for Benjamin Franklin, who died in April 1790.

Harry Hatch was the first town supervisor when the town was created in 1836. There is a long list of supervisors — difficult, probably only for me, to get an accurate total because many of them served many times in different years.

For example, Hugh McKillip served as supervisor five times, but not consecutive, from 1896 to 1908. He was our cousin, as was Patrick McKillip, who served terms from 1871 to 1877. While I’m at it, our cousin Timothy O. Howard was supervisor from 1893 to 1895. He was Pat Howard’s grandfather. Probably by no coincidence, his town clerk was Daniel D. McKillip. Tim Howard’s wife was a McKillip, Pat’s grandmother, my grandmother’s sister. They were all from Alder Brook.