One can barely make out Donald E. Whitaker in the chair the men are struggling with to place him in the bucket of the rescue loader. (Enterprise photo — Phil Gallos) 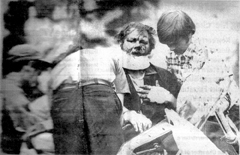 That was the horrible headline in the July 31, 1974, Enterprise, 45 years ago. A dynamite charge ignited accidentally, creating a giant explosion that killed two workers, whose bodies were buried under tons of rocks and not recovered until hours later.

What follows are excerpts from an incredibly detailed story by Enterprise reporter Phil Gallos:

“Two men were killed and one man was critically injured yesterday afternoon by an accidental explosion at the Torrington-Saranac Lake Sand and Gravel Company quarry north of the is village.

“Dead are Thomas Goodman, 26, of Keeseville, and Gilbert Gravelle, 58, of the Port Henry-Moriah area. Injured and in the intensive care unit at the Saranac lake General Hospital is Donald E. Whitaker, 37, of Keeseville.

“According to state police, the quarry, located on the southeast slope of Brewster Mountain above the Torrington gravel pits off Route 3 about halfway between Saranac Lake and Bloomingdale, was being prepared for blasting when the explosion occurred at 12:50 p.m. 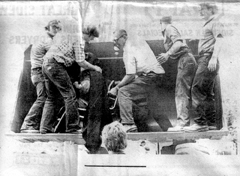 One can barely make out Donald E. Whitaker in the chair the men are struggling with to place him in the bucket of the rescue loader. (Enterprise photo — Phil Gallos)

“Twelve holes had been drilled down behind the 75-foot high fence of the quarry and packed with explosives. State police theorize that Goodman and Gravelle (who had been in the blasting business for 30 years) began drilling of a 13th hole because one of the others was found to be clogged with water and slit.

“What happened next is not known. Possibly the drill cut into one of the drilled holes, possibly it only came critically close; possibly the drilling of a 13th hole produced enough static electricity to detonate one of the electrically sensitive blasting caps. Whatever the cause, one of the dynamite charges exploded.

“Goodman and Gravelle were blown off the top of the face and killed by falling rocks loosened by the blast. Goodman was crushed by a rock the size of a large trunk. Gravelle was buried under tons of shattered stone. His body was not recovered until 8:30 p.m. after a search which was interrupted by a thunderstorm that threatened to set off the rest of the charges.

“Whitaker was operating a front end loader at the base of the quarry. The loader was bombarded by small and medium size rocks and demolished, but the fact that Whitaker was on the loader probably saved his life. The loader had a Fiberglass cab which, although ripped apart, absorbed the initial impact of the explosion.

“Whitaker suffered contusions and lacerations of the face, fractures of the clavicle and ribs, and pulmonary contusions (internal injuries to the lungs and chest).

“Because of his injuries, Whitaker would not have been able to breathe lying down, and his rescuers had to keep him in a sitting position.

“He was lifted into a chair, another front-end loader was brought in to assist in bringing the man down from his machine.

“Whitaker, conscious, moaning slightly, and uttering a few words now and then, was carried to the ground level in the bucket of the second loader, then carried to the waiting rescue vehicle and rushed to the hospital.

“Two other men were at the scene when the accident occurred. They were installing a carburetor on the engine of a crane and were behind the crane when the charge went off. They were not injured, but the crane, at a distance of approximately 90 yards from the quarry face, was practically destroyed.

“So powerful was the blast that a rock the size of a basketball travelled a hundred yards with enough force to snap a two-inch thick solid steel rod on a parked bulldozer.”

“Goodman lived with his parents, Wilbur and Theresa Goodman, on Route 9 in Keeseville. He had three brothers and a sister.

“Gravelle was married but no other information was available at press time.

“Whitaker lives on Smart Street in Keeseville and is married. He and his wife Teresa have three sons, Glen, 11, Dale, 9 and T. J. Whitaker, age 6.”

Phil Gallos, a friend of mine is an author, accomplished photographer and racketeer — oh, sorry, I mean raconteur. He came to Saranac Lake from New York City with his parents as a boy when his father became ill with tuberculosis. This city boy took to the mountains and wrote a book, “By Foot” — among others — which traced every trail and foot path in these here mountains and which became the bible of the hiking clubs. 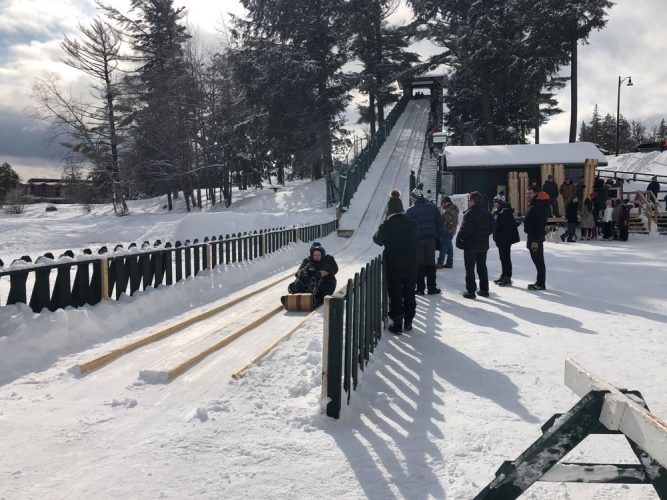 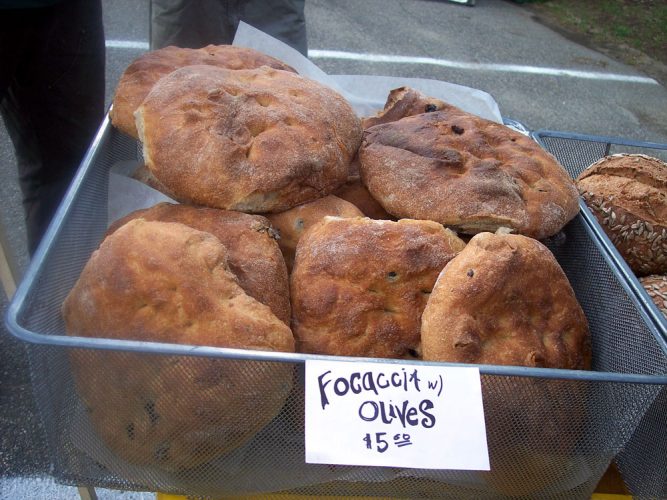 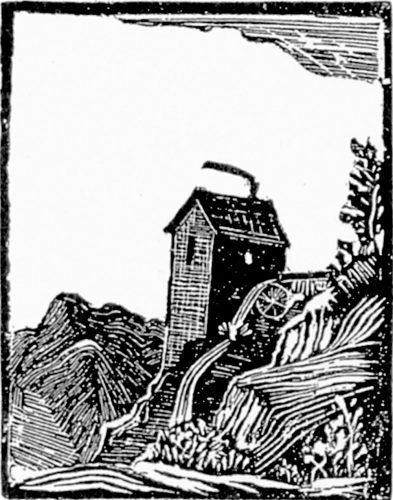