Breaking news — that’s been ‘broke’ before 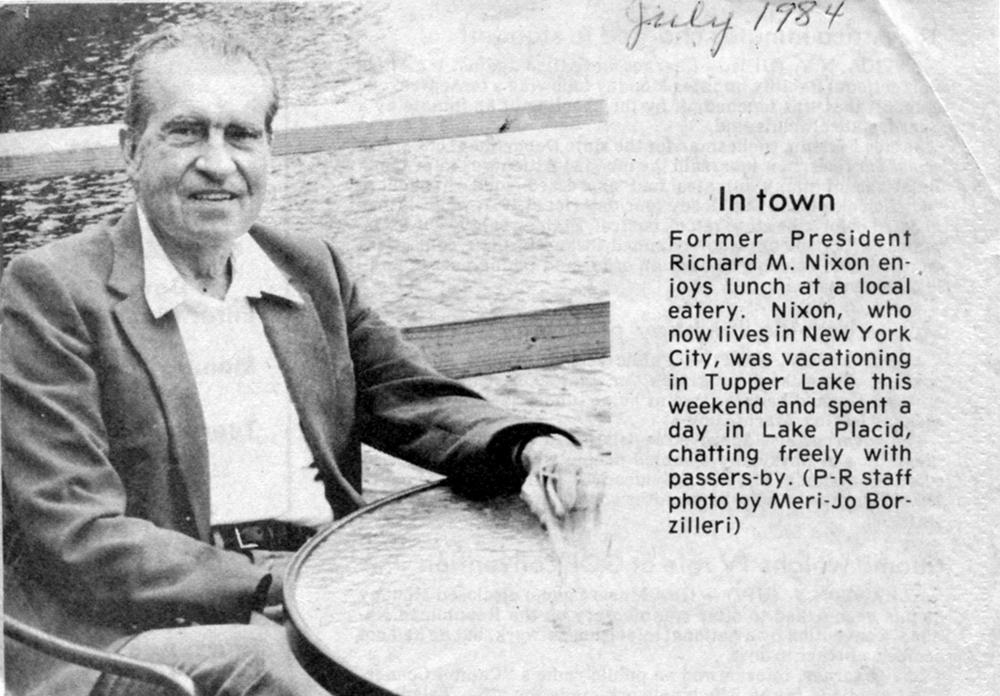 (All of these excerpts are from the Adirondack Daily Enterprise.)

RAY BROOK — “An inspection team is on the way to the Federal Correctional Institution [formerly the 1980 Olympic Village for the 1980 Olympic Winter Games held in Lake Placid] here to look into security issues at the prison following the escape of two inmates who were subsequently apprehended after a high speed chase over the weekend.

“Bank robber Eric Jan Vreeken and convicted drug dealer Philip Prescott are back in prison today after their 33-hour escape ended early Sunday morning following a high-speed car chase from Paul Smith’s to Saranac Lake. The felons ended up abandoning their stolen truck near Glenwood Estates and were apprehended by police after fleeing on foot into the woods on Dewey Mountain.”

(My New York State Police pals Sean Donovan and Mike Downs were probably in on the manhunt.)

COREYS — “Rain, hail and chunks of ice came flying down on the south shore of Upper Saranac Lake Friday morning as heavy winds uprooted huge trees and sent them smashing through house roofs and windows.

“Some residents here believe the brief storm, part of a larger one that swept through the region late Friday morning, was a small tornado that left as quickly as it came.

“‘It was the biggest storm we’ve had in the Adirondacks since the 1950 hurricane,’ asserted Dr. Richard Handler, who lives on Upper Saranac.

“State Department of Environmental Conservation officers could not confirm evidence of a tornado and this morning preferred to consider it an unusually heavy and quick storm.

“Handler’s house was spared the worst damage in the swath of destruction caused in about 15 minutes of wild weather late Friday morning. His three young sons were home alone when the storm hit. Seth Handler, age 11, said, ‘There were big blobs of ice falling through the air — and hail, and trees falling. We could see trees being hurled through the air.’ He and his ten-year-old twin brothers then called their father to tell him what was happening outside.”

WASHINGTON, D.C. — “Facing expected impeachment over the Watergate cover-up scandal, President Nixon went on nationwide television and announced his resignation, the first American president to do so. The next day, he left office after an emotional farewell to his staff and cabinet.”

(Whoa … how did that get in here? He then retired to Tupper Lake. See photo.)

SARANAC LAKE — “Thirty-five-year-old pilot James Munn remains in stable but guarded condition this morning at the Adirondack Medical Center as the result of injuries suffered Wednesday when his plane crashed in the woods near North Country Community College.

“Munn’s single-engine ultra-light airplane went down about 4:40 pm Wednesday in the woods along the railroad tracks, about 200 yards from the NCCC’s soccer field.

“Witnessing the crash was Ed Coppola, NCCC professor, who watched the plane go down from a hill near the college library. ‘I could hear the engine sort of cut out. It didn’t stall, just went to a lower pitch, like it lost power. It dipped down a little bit and then I heard the engine get stronger again. The he tried to make a hard right turn, and the plane just kind of fell out of the sky,’ Coppola explained.

“Hospital spokeswoman Cheryl Breen said Munn suffered lacerations to his scalp, a fractured left wrist and a severely fractured left ankle which required surgery and that he remains in intensive care.

“Munn and James Goodrich, the aircraft’s co-owner, had recently rebuilt the plane following an earlier mishap near Mt. Pisgah this winter.”

AuSABLE FORKS — “The AuSable Valley Central School bus garage sustained an estimated $1 million in damages Thursday after a fire destroyed the building, consuming eight school buses in the process, according to a school district spokesman.

“The AuSable Forks Fire Department received the fire call at 11:42 p.m., and was assisted in its attempts to extinguish the blaze by fire fighters from Jay, Upper Jay, and Keeseville.

“Because there are no buses available, school in AuSable Forks was canceled today, but will reopen at the normal time Monday. The school will pick up eight buses rented for the week from the Lake Placid school district which is on spring vacation until April 14.”