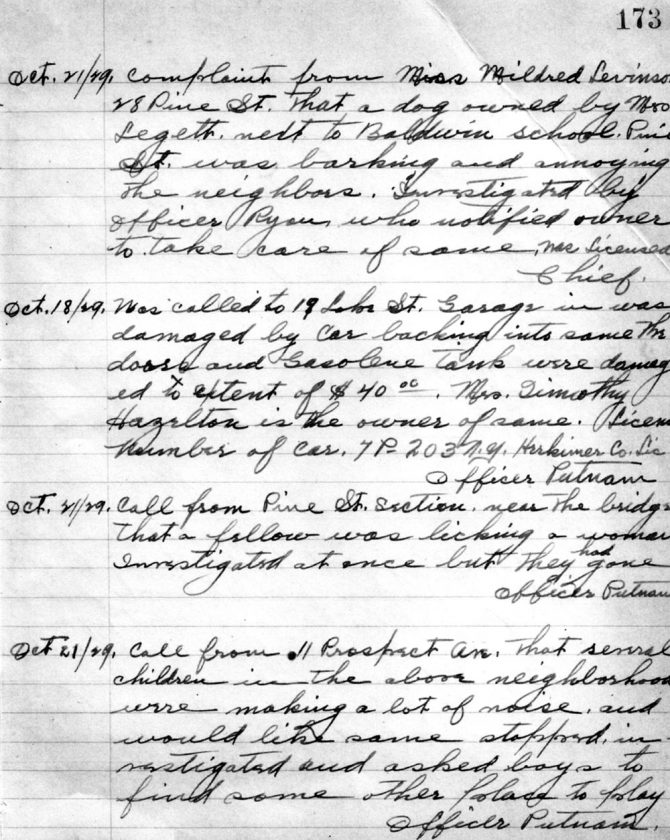 This police blotter from 90 years ago tells a tale or two about life in Saranac Lake. (Provided image)

October 1 –The following all entered on this day:

“Fred Bailey made a complaint of several dogs running at large on Riverside Drive without muzzles.”

“In the above complaint Mr. Bailey gave several names but only one address — 93 Riverside Drive and they do not own a dog at that address.” (Whoops!)

“Received a written complaint from Mildred A. Simon of 44 Franklin Avenue. She says there are several dogs near her home without a license or muzzle. She supplied the names of the dog owners and I warned all of them to take care of their dogs. F. P. Smith, 34 Franklin; Hugh J. McCabe, 35 Franklin Avenue; Irene O’Brien, 40 Franklin Avenue; A. B. Robinson, 45 Franklin Avenue and Camilla M. Hayes, 68 Franklin Avenue. I also spoke to the Village Manager (1929 — first year that position existed) in regard to this matter and he is having a warning published in the Adirondack Daily Enterprise and if that does not help matters he is going to appoint a dog catcher.”

“Complaint that Papineau of 50 Neil street has an ugly police dog running at large without a muzzle and it chases the news boys. Called Papineau by phone and warned him to care of his dog.”

October 3 — “Complaint from Mrs. Jason Vosburgh of 10 Terrace Street about a man hanging around her house nights and tapping on the windows. She is sure the man is Jack Packinaw. Have been unable to get in touch with Packinaw.”

October 5 — “Complaint from Fred Callahan that his Ford Coupe, license 7F9959 was stolen from in front of McVeety’s Lunch Car. (Later the Miss Saranac Diner — picture a big trolley car — located at the right side of the Sturdy Supply Company on Bloomingdale Avenue.) Callahan was partly under the influence of liquor. I believe he left the car somewhere else.”

October 5 — “The above car found parked in front of the Orient.” (A Chinese restaurant located on Broadway.)

October 6 — “Complaint from Mr. McVeety that a $50 bill had disappeared from the register in his lunch car between 4 p.m. and 1 a.m. He thinks it’s an inside job but not clues to work on. This bill was recovered later.”

October 8 — “Complaint from the Hotel Saranac that someone took an overcoat from the rack in the lobby.”

October 12 — “Complaint from children on River Street that a large, female police dog was hurt by a car near the park. Investigated, found the dog was injured so bad that I shot it. This dog had a collar and license.”

October 17 — “Called to St. Regis Hotel, (located in an empty lot at the corner of Broadway and Bloomingdale Avenue) to quiet down a couple of intoxicated guests. They had quieted down when we got there.”

October 19 — “Received a call from Village Trustee Dan. S. Foster asking me to pick up Mrs. Phil McCrackin at Berkeley Square and take her to Colby Corners in the police car so she could get her baby. She did not want to stay in the house with her husband, who she said was drunk and mean. While we were there, her husband bawled her out for running around nights to dances. Mrs. McCrackin got her baby and we took her to the apartment house at 142 Main Street.”

October 21 — “Mrs. Goff of 23 Neil Street complained of someone stealing a spare tire and rim from a new 1930 Chevrolet Coach (a four-door car). It was parked in her yard. Some relatives were here attending her son’s funeral. She let them use the garage and that is the reason for having parked her car outside.”

October 28 — “Complaint from Dr. J. Woods Price. Some boys were going a little too far in celebrating by letting the air out of the tires on his automobile. Investigated and found Percy Saumier, age 15 who resides at 5 Keene Street, as the one who was guilty of doing the above. Warned the boy not to do anything like that again or he would be brought into Children’s Court.”

October 29 —“Telephone call — Some boys were breaking into the Tent Show in the rear of the Hasse Building. Investigated at once and found Wilfred Doty, age 10 yrs. (probably a relative of my pal Derek); and Herman Myatt, age 8 yrs. These boys who live at Colby Corners, had crawled through a hole in the back of the tent which they said was already there. They had taken several colored celluloid photos (wonder what kind of a tent show?) which they had hidden in their shirts. Gave them a good warning.”