Testimonial to a Tri-Lakes vacation

Jane Pauley smiles with Howard Riley while visiting Historic Saranac Lake’s offices in August 2019. They were laughing as they remembered Riley being at their wedding reception here, when she married Garry Trudeau on June 14, 1980. (Photo provided)

Emily and Greg Weiss pose with Howard Riley (at left); the Cure Porch on Wheels is in the background. (Photo provided) 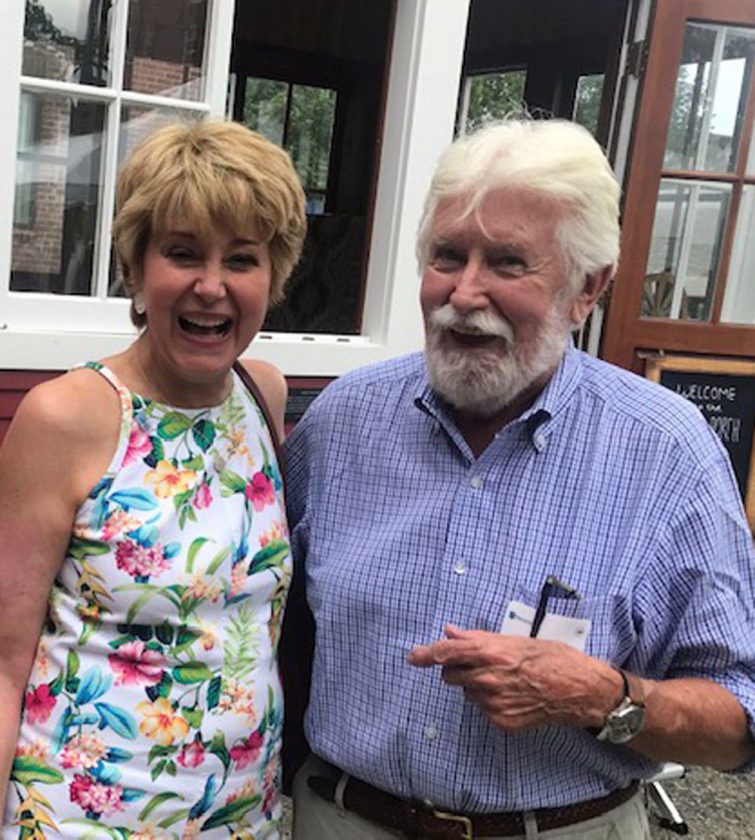 Jane Pauley smiles with Howard Riley while visiting Historic Saranac Lake's offices in August 2019. They were laughing as they remembered Riley being at their wedding reception here, when she married Garry Trudeau on June 14, 1980. (Photo provided)

I happened to be the self-appointed, unofficial greeter at Historic Saranac Lake’s Ice Cream Social on Aug. 24 (all ice cream donated by Stewart’s Shops). People from all walks of life took advantage of the museum tour and walking into the beautiful Cure Porch on Wheels parked at the rear of the museum.

There I met this charming couple from Massachusetts, Greg and Emily Weiss, on their first visit to the area, celebrating their wedding anniversary. Now they have written me the following note about their trip.

“We arrived back in Massachusetts after our week in the Adirondacks and are dropping you a line as we told you we would. We so enjoyed meeting you and Ruth at the Ice Cream Social at the Saranac Lake Laboratory Museum. You were able to provide such flavor to the trip with your stories of the Saranac Lake area and the 1980 Olympic Winter Games. We also want to thank you for introducing us to Michele Tucker in the library’s Adirondack Research Room.” (We by chance met the next day at the library. Emily Weiss is a librarian, so she was also interested in Melville Dewey, who created the Dewey Decimal system for libraries when he was a 21-year-old student at Amherst College in Massachusetts — also that it was he and his son, Godfrey, who brought the 1932 Olympic Winter Games to Lake Placid.)

“We really enjoyed celebrating our wedding anniversary by visiting Saranac Lake and staying at the Hotel Saranac. We loved the hotel’s Great Hall Bar and Terrace. Saranac Lake is such a charming town. We found some good gifts in the shops downtown, especially in Goody Goody’s and the Book Nook. We had delicious meals at Fiddlehead Bistro, Casa del Sol, Blue Moon Cafe and Origin Coffee and creamy delicious ice cream at Donnelly’s. We also attended the Pendragon Theatre’s performance of ‘The Foreigner,’ which was especially appropriate because we first met when Greg played Owen Musser in our high school drama club’s production of ‘The Foreigner.’

“After leaving Saranac Lake, we stopped at the Wild Center in Tupper Lake (we especially loved the Wild Walk), then we continued west to Covewood Lodge on Big Moose Lake, where we spent a couple of relaxing days enjoying the beautiful scenery and listening to the loons on the lake. On a rainy Wednesday, we left Covewood Lodge for our next stop, the Garnet Hill Lodge in North Creek. On our way we visited the Adirondack Experience which really illuminated the region’s history for us. We really enjoyed Garnet Hill Lodge, which overlooks Thirteenth Lake. There we had a chance to hike and canoe (and see more loons), and on the last night of our stay, the sky was so clear that we could see more stars than we have seen in years … we could even see the Milky Way. It was a fitting conclusion to a truly wonderful vacation.” 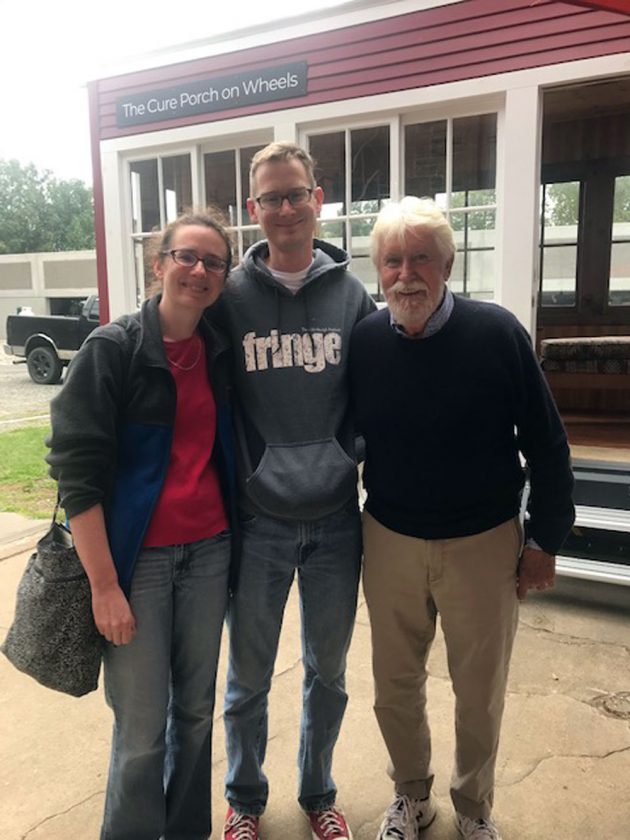 Emily and Greg Weiss pose with Howard Riley (at left); the Cure Porch on Wheels is in the background. (Photo provided)

Dr. Edward Livingston Trudeau’s laboratory on Church Street is a living, vibrant place (I can feel Dr. Trudeau’s vibes when I walk through the lab where he worked so hard and touching everything he touched), hosting interesting programs with interesting people and with unusual presentations all year long. The meeting area is not huge, but the place is packed to standing room only at every occasion. I know because I attend almost all of them.

Now HSL has purchased the original Trudeau home at the corner of Church and Main to expand the museum facility and to preserve a historic building. That is a bigger story in itself for a later date.

Here is an interesting aside to using the word “original’ when referring to the Trudeau home. I was honored to be a member of the committee that published our Centennial Book in 1992, much of which was written by John Duquette, including the following excerpt:

“Trudeau and Stevenson (Robert Louis Stevenson, author of “Treasure Island“) became close friends with only slight difference of opinion. The doctor objected to the author’s smoking habits while Stevenson considered Trudeau’s experiments with the tuberbacilli cultures to be sickening indeed. Ironically it was the smell of the little oil fired incubator, which nauseated R.L.S., that also turned out to be the same contraption that burned down Trudeau’s house in 1893.” (It was rebuilt soon after.)]

Amy Catania is the tireless executive director of HSL: speaking, cajoling for funds, telling stories, conducting tours and always with a smile.

The work behind the scenes at all of these events — “the Events Committee” — are board members or former board members who bring the goodies, make the fruit platters, supply the flowers and pour the wine: Lorraine Kelly, Ruth Chasolen, Penny Curran, Linda Jackson and Amy Jones.