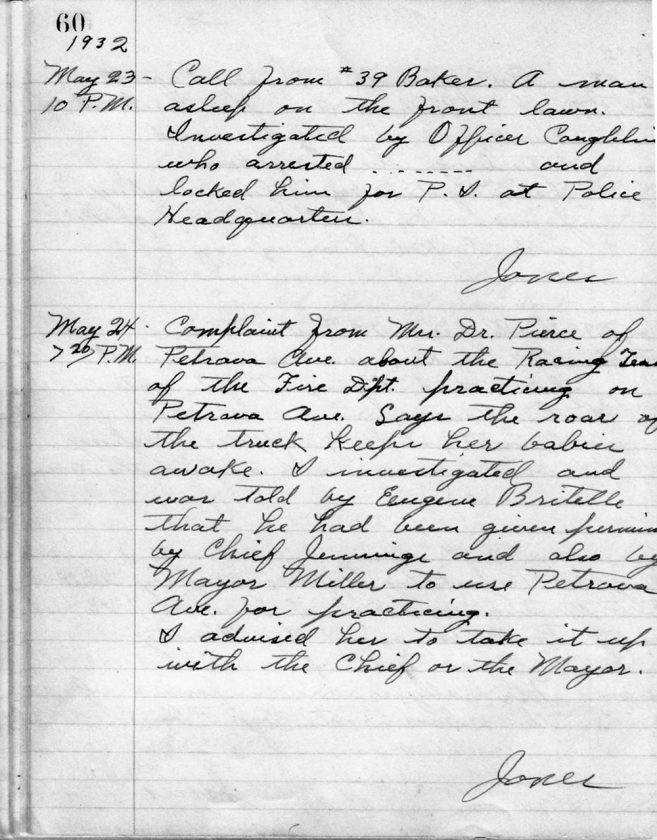 There were many problems with dogs in Saranac Lake back in the 1930s; sometimes two or three complaints every day.

As the village grew, leash laws were passed, dog catchers hired and a dog pound was established at the Water and Sewer Department on state Route 3 just outside the village.

I may have mentioned this before, when I was name-dropping, but when I had the privilege of meeting Vice President Herbert Humphrey in Washington he said this to me: “Mr. Mayor, get out of that job as fast as you can because there are better things in politics; when I was Mayor of Minneapolis my biggest headache was complaints of dogs running loose and garbage not being picked up.” He was correct — same for me. Household garbage pickup was then a village service.

Oh, yes, where were we? The police report.

Wait, there’s more — My friend Roby Politi, supervisor of the town of North Elba, has been posing as Merrill Thomas for years and actually running a big real estate business under his name.

I knew the late Merrill Thomas and he is not Roby Politi, he always wore a suit and tie to work.

Roby has many associates on the staff and my grand-niece, Hannah Littlefield Torrance has a fancy desk job there but I don’t know her title. I must mention, however, that her mother, my niece Patricia Littlefield, is the Supervisor of the town of Tupper Lake … whose father, John Sparks, was a best friend from our teenage years.

Supervisor Politi has held every elected job in his bailiwick — mayor, town judge and supervisor and is now retiring from public service.

He always said he wanted to be Howard Riley when he grew up but he didn’t quite make it because he was never village manger – Well, of course, Lake Placid does not have a Village Manager.

All right, all right! I’m getting to it.

APRIL 7, 11:30 a.m.– Received phone call. There was an ugly dog near 45 Olive Street. Dog had attacked the Mail Carrier. Investigated by Officer Coughlin [later promoted to Chief]. He was unable to learn who the owner of the dog was. Dog did not belong at 45 Olive Street. Dog turned on the officer who shot him and took him to the incinerator. Part bull. Color black & white. — Chief

APRIL 9, 8 p.m. — Phone call from Mrs. Dr. Pierce. Complaint that a Lester Brown is annoying a girl who works for her and although Dr. Pierce has warned him to stay away and stop calling her on the phone he persists on annoying her. The girl says that she does not want anything to do with him. Would like the police to warn Mr. Brown. He is very tall and wears a light moustache. — Jones

APRIL 11, 12:20 p.m. — Turned over to Sgt. Paul McGinnis, New York State Police. Warrant of arrest for one L. P. O’Driscoll. Charged with violation of Section 1292A of the Penal Law. Rubber Check. Check held by William Kerr. The above suspect may be found at the Aiken Camp at Paul Smith’s. — Chief

APRIL 13, 1:40 p.m. — Alex Rose, 4 Colony Court reports that on several occasions someone comes to his house during the night and steals the clothes off his clothes line. One time taking 35 Barber Towels [?] and the last time taking a $15 Bath Robe — Color Brown Collar and Cuffs. At other times stealing suits of underwear. The last visit they made was last night. I advised Mr. Rose to keep his property inside at night. [I guess that solves that case.] He is unable to give any description or information as to who might be the guilty party. — Officer Davis

APRIL 16, midnight — Telephone call from Mrs. Joseph Davidson of 111 Broadway that there was a man at the rear of the building who had been hanging around there for some time. Investigated by Coughlin & Duprey who found Myron Richardson there. He said he was waiting for his wife. She had left home at noon and did not come home. Her car was parked there, so he thought he would wait around and see who she was stepping out with. — Officer Coughlin

APRIL 18, 1:45 p.m. — Mrs. Davis of no. 52 Algonquin Avenue complained at the police station that the children at Dr. Worden’s [not Wardner?] were throwing bowling balls around on the porch and that the noise was disturbing her mother who was ill. Called Dr. Worden and he said he would see that the noise was stopped. — Duprey

APRIL 20, 6:20 a.m. — Phone call from Mrs. Oschia Stearns, 99 Lake Flower Avenue that some time during the early hours of the morning some dogs running at large raided her rabbit house and killed 22 of her 30 rabbits. She looked out the window and saw two dogs. One was a large police dog and the other a small brown and black dog. Both of them had a rabbit in his mouth. [Great Easter story, eh?]. Mrs. Stearns shot and killed the police dog. Owner of that dog was Northwick of 46 Lake Flower Avenue. The other dog got away. Found out later that day that the other dog belonged to Nukey Charland of 18 Edward Street. — Officers Duprey & Davis.

APRIL 26, 2 a.m. — Phone call there was a man laying on or near the railroad crossing on Pine Street. Investigated by Officer Davis who found a young man laying with his head on the curb and his feet on the R.R. tracks. He was absolutely unconscious. No identification. — Sgt. Jones

APRIL 28, 12:05 a.m. — Call for police at the Chinese Restaurant. Investigated by Officers Putnam and Coughlin who arrested Rocco Ferro who was attempting to throw his wife off the Broadway Bridge. She was saved by Mrs. Jeanette Wilson of 167 Broadway, Apt. 3,who grabbed her by the leg and held on until help arrived. — Sgt. Jones