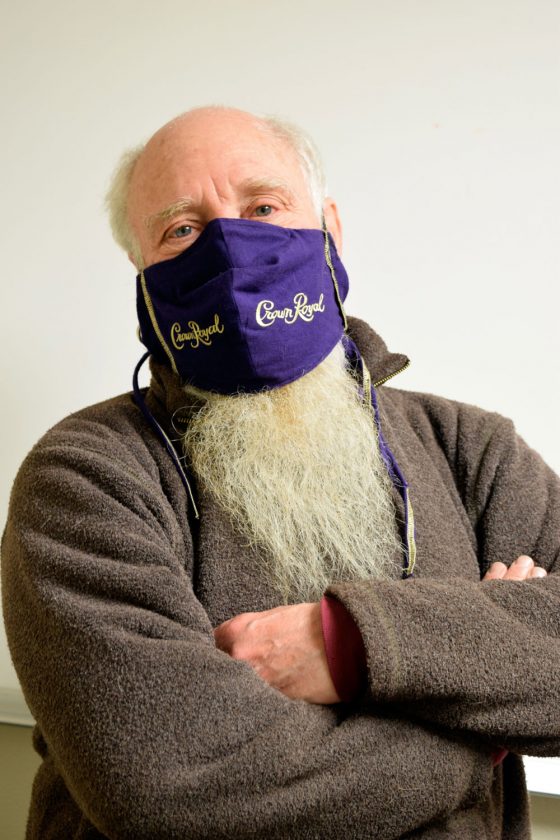 Bob Seidenstein has MacGyver’d himself a very snazzy mask out of a Crown Royal bag he just happened to have lying around. (Enterprise photo — Peter Crowley)

When I was in my mid-teens, if you’d asked me or any other young lad what “Q” stood for, I’m sure almost all of them would’ve had the same answer: Q stood for Q.

Today if I were to ask anyone what Q stands for, there’d again be only one answer, but it wouldn’t have anything to do with James Bond. It’d be for quarantine. And following that, would be the inevitable question: “How ya holding up?” It seems to be the opening line of almost all our conversations — either in person, on the phone or in email.

In my case, I’m doing fine, and there are a bunch of reasons why.

First, I’m retired and have been for almost six years. Consequently, I have no job to worry about losing; plus, because I’ve been retired so long, I’m comfortable with it.

The whole time I worked, I always heard retired peeps say they were now busier than ever. Bully for them, I thought, but that sure wasn’t how I wanted to do it. And I didn’t. Essentially, I’ve turned loafing into a fine art. Sure, I have my hobbies. I do woodcarving (passably); I draw cartoons (poorly); I cook (acceptably, but only because I can eat anything I whip up). I have a good-sized list of email correspondents, and I’m in touch with several every day. Being old school, I have another bunch of folks I actually talk to on the phone — a landline, no less. Plus, I’m a compulsive reader with a huge stash of books.

Second, there’s my animals. I’ve got three dogs, a cat and a goldfish, all of whom require tending to each day.

Third, there’s the internet, on which I spend entirely too much time. I do a lot of research, though granted in an informal if not whimsical way. I might be drinking my second gallon of coffee of the morn when suddenly it hits me: What country consumes the most coffee? (Per capita, it’s Switzerland, with 23 pounds a year.) Or maybe I’m reading a mystery in which the detective always wears a trench coat, so I wonder when the trench coat was invented. (1850, according to the Brit clothing manufacturer Aquascutum.) Or maybe I want to find out something that just came to mind for no reason whatsoever.

And then there’s Facebook. The less said about my time spent on that, the better.

So, yeah, I have lots of things to keep myself occupied and entertained at home, which is fine during the quarantine. But what’s not fine is I can’t spend all my time inside without going bonkers. The dogs are a partial answer to that, since they need several long walks a day. And I try to go out each day for what’s optimistically labeled a “speed walk.” And while the quarantine hasn’t affected either of those things, something else has been affected — my socializing.

When I say socializing, it’s not in any formal sense. I don’t belong to any organizations; I rarely go to sponsored events; the last time I went to a party was some tyke’s b-day in fourth grade. When I say socializing, I mean just wandering around town once a day, shooting the breeze with either my “regulars” or peeps I happen to run into. Among my regulars, lest you wonder, are Sylvia Cecunjanin, Babs Curtis, Black Pete Benson, the Enterprise front office and, of course, folks at my Lakeview Deli office. Now, none of those happen. There is takeout and curb service from various businesses, and I try to patronize them, but it’s just not the same.

And speaking of stores: I go out to buy my groceries at Aldi and Tops, and my hat’s off to the stores and their employees for being so dedicated in these hard times. But I have noticed one strange anomaly. The last few times I’ve shopped, Aldi had toilet paper but no lettuce, while Tops had lettuce but no toilet paper. I don’t know what this means, if anything, but I’m not sure I want to find out, either.

One big change hit me last week, which involved my car.

The good news about cars and quarantine is, since there’s nowhere to go anymore, my car hardly gets driven. Or to put it in Car and Driver terms, I’m now getting about two weeks to the gallon. But that doesn’t mean it’s still not a car. In other words, use it a lot, use it a little, or use it hardly at all — that sucker’s still gonna go south on you.

About two weeks ago I was driving into town when I noticed a noise coming from my front right wheel. It was a “ka-chik, ka-chik, ka-chik,” kinda like if Double Axel’s Rhythm Queen, Beth Bartos, had given up her beloved cowbell for the maracas.

Having owned cars for the last 50 years, I’ve learned two things about car noises. One is, if the noise stays the same or goes away, you’re OK … at least for a while. The other is if the noise gets worse, you’re not OK now, and pretty soon you’re gonna be a lot worse. So when the “ka-chik, ka-chik, ka-chik” changed to “KA-CHIK, KA-CHIK, KA-CHIK,” I immediately drove to Evergreen.

There were no lights on and a note on the door that said they were now closed, would open the 17th, and were taking appointments by phone. I called, got Dave Smith, and he got me an appointment for the 23rd, 14 days hence. Then I did the only thing I could — hope nothing would get worse till my appointment.

And the day after that, whenever I put on the brakes, accompanying the “KA-CHIK!” was a freaky grating noise. The only way to describe it is, it sounds like grinding rebar at a slow speed, which I suspect is exactly what’s going on.

So what to do?

I did the only thing I could — nothing. Or at least nothing to solve the problem. Instead, I did something to worsen it — I kept driving.

Yeah, I know that sounds foolish, but it’s not. Dope-ish, perhaps, but foolish, no.

First, the car has three other good sets of brakes. Second, I don’t drive more than 3 miles at any time, and at maybe 30 mph. So it’s not like my brakes are going to fail.

Sure, the more I drive it, the more it’ll screw up that brake. But guess what? I figure it’s already a goner, and I’ll just have to spring for a total replacement. Besides, I don’t have any options. Yeah, I guess I could try another garage, but that’s not gonna happen for one good reason — customer loyalty. Evergreen has always done right by me, especially when I’ve really been up the creek. I know and trust them, and they find my humor irresistible. So there IS no reason to change.

One new quarantine development (at least as I write this): Gov Cuomo has ordered all New York residents to wear masks in public. I realize a bunch of folks will resent this and’ll grouse about having their rights impinged on, or a police state takeover, or an Illuminati plot, or something, but I’m not one of them.

Conspiracies aside, I don’t like wearing a face mask because it’s annoying and uncomfortable. But I will.

Ultimately, to me it’s a simple issue: If everyone wears a face mask, it’ll cut down their chances of either giving or catching COVID-19. And thus it’ll cut down the chances of it spreading. I don’t know how effective the masks will be in lessening the spread, nor do I think anyone does. But I do know — as with my brakes — they have to be more effective than just hoping it’ll all take care of itself.

As a parting note, stay safe, stay healthy, and keep the faith.

And if you can’t keep the faith, at least keep the social distance.