What goes up must come down … and sometimes vice versa 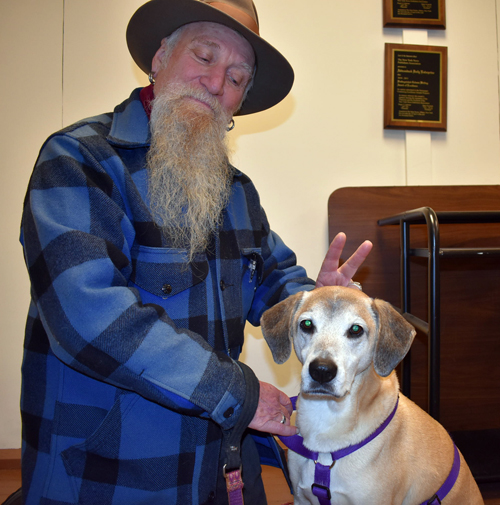 The Dope and the dog (Enterprise photo — Corey Trombley)

Most of us are suspicious of statistics, and rightly so. Not that their conclusions can’t be accurate — of course they can. But it all depends on how the conclusions were arrived at. If they were based on unrepresentative or inadequate cross-samples, then they’re dubious at best.

For example, we’ve all read that dog owners live longer than non-dog owners. This is because dogs reduce our stress levels and anxieties, making us healthier, happier and (so the reasoning goes) ultimately older than we would’ve been without a houseful of hounds.

Now, I’m not sure whose dogs they’re talking about, but I doubt they’re mine.

A recent episode with my dog Jesse should prove my point … abundantly.

Jesse, like my other two dogs, is a rescue. He started life as Tennessee trailer trash and was found in a leg-hold trap by his savior and namesake, a cop named Jesse. Despite his deprived and traumatic childhood, he’s a sweet, easy-going soul. He’s neither aggressive nor nervous. He likes everyone, and he’s always well-mannered and obedient.

But he does have his nerve-racking quirks. One is he’s too good a watchdog. Whenever anyone pulls into my driveway or walks by the house, he erupts in an ear-splitting barking fit. Or sometimes, he does it when no car’s in the driveway and the nearest person isn’t within rifle range.

A deer in the yard will also launch him into full frenzy, as will a squirrel, a chipmunk, a leaf, or a dybbuk in the ether.

Poor boy just can’t avoid it. And, poor Dope, I can’t avoid getting shocked witless when he does. He reminds me of that classic Canadian limerick:

An inveterate klepto from Guelph,

Stole whatever wasn’t nailed to the shelf.

He never made bail

And hated being in jail,

But was incapable of helping himself.

And then there’s Jesse’s specialty — unbridled appetite. And when I say “unbridled,” that’s what I mean. That boy will, and has, eaten just about everything.

Outdoors, he’s an inveterate turd-snagger. To him, poop — any poop — is as good as pot roast. But no doo-doo to munch on? No problemo. He’ll eat crumbs, candy (or candy wrappers), chewing gum, chicken bones and so forth. If, however, there’s no food, that’s OK, too, since he’ll gladly nosh on sticks of any ilk.

Indoors, anything is fair game if it’s not securely locked away. Which is why I guard my munchies as scrupulously as Ismail ibn Sharif guarded his harem (or at least as well as I can without a crew of eunuchs to help out).

Still, it’s an imperfect effort, as our latest episode shows.

Two weeks ago, Jen-X and I are sitting in the living room on what chair space the dogs had allotted us. We’re chatting like magpies, and all’s copacetic till Jesse gets a weird look on his face. He lumbers off the chair and starts pacing nervously, back and forth. Then, still pacing, he starts sniffing and licking the rug.

So I do the most useless thing a dog owner can.

He ignores me and keeps up his weird pacing, sniffing and licking.

I feel my blood pressure spike. My head starts throbbing.

The vet’s office is closed, and they no longer handle emergencies. I’m all alone with this — adrift on a roiling sea of near-hysteria, in a leaky rowboat. Not only is there nothing I can do, there’s nothing I can think to do. All I can imagine is the poor sod’s gonna give up the ghost right there and then.

Suddenly, he stops pacing and stands still. Then he starts shaking uncontrollably.

I know dogs do that when in pain, so I poke and prod him from stem to stern, to see if he yelps and I can find where the pain is. He doesn’t yelp … but he keeps shaking.

His eyes are wide with fright. So are J-X’s, and I’m sure mine are, too.

It’s a freaky tableau: J-X is in her chair. I’m standing in front of mine. Jesse’s in between. All of us are frozen in place, waiting for we know not what.

And just when I find myself on the verge of calling 911, Jesse stops shaking.

Then drool starts sliding out of his mouth — long, thick strands of the stuff.

I watch him, transfixed.

A few seconds go by, and then his stomach starts heaving and he makes a glug, glug, glug sound.

Slowly, he opens his gaping maw and without so much as a twitch he yakks a bilious glob of steaming, semi-digested kibbles. Then another. Then another. And catch this: In each one is a sheet of bubble wrap — in total, at least one square foot!

At this point, he’s just standing there, admiring his handiwork.

Then he looks at me, as if to say, “Show’s over, time for the cleanup crew,” and strolls into the kitchen for some well-earned slurps of H2O.

I stand there, gobsmacked, both my heart and mind racing, torn between wanting to light a votive candle or burst into tears.

After I cleaned up the mess and things looked normal (at least as normal as they ever look in my digs), I looked over at Jesse, now asleep in “his” chair, snoring softly.

By then my pulse and breathing had settled down, and my dog-death hysteria had been reduced to a mild case of the shakes. Still, I was rockin’ enough adrenaline to keep me wide awake till the wee hours, and beyond.

I found myself thinking, “What I need now is a big bottle … of either Xanax or Old Crow.”

Luckily, I had neither.