The root of all goodness 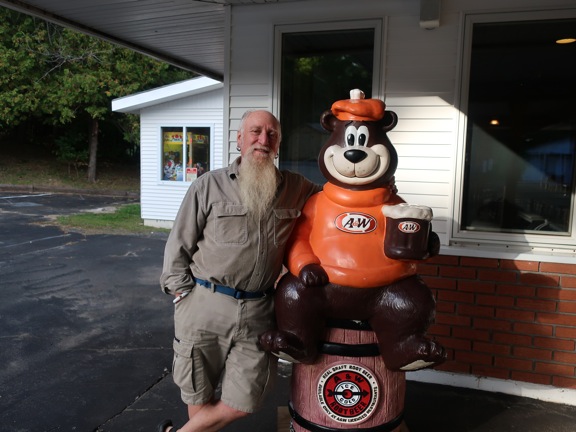 The Dope and the bear (Photo provided)

While I drink soft drinks, I cannot be considered a “soda drinker.” If I average a soda a month, I’d be surprised.

I wasn’t always like that. In my gilded youth my consumption of anything sugar-laced was prodigious and promiscuous. Candy, soda, baked goods, ice cream — you name it, I scarfed it.

Discrimination was nonexistent when it came to my sucrose-a-holism, especially with soda. Coke, Pepsi, Orange Crush, Nehi, Mission, and so on, didn’t any of it make a nevermind what I drank. Eventually, I settled with Royal Crown cola as my weapon of choice for one obvious reason — the mazuma. RC was the first to come in a 16 oz. bottle, when all the others were 12 ouncers, but it still cost the same (a lordly 15 cents, as I recall).

My apparent lack of soda discretion was actually driven by my gourmet tastes. I drank any and all sodas because I couldn’t get the only one worth drinking. I was a pint-sized Lancelot, knowing the Grail existed, but unable to reach it.

And what was the Grail of Sodas? A&W root beer. And when I say A&W root beer, I mean only the stuff available at their restaurants — in the frosted mug. Don’t forget, A&W didn’t become available in bottles and cans till 1971, but even then, fergit it. Nothing tastes as good as the Real Deal, in situ.

Belief is just a swallow away

Just as no one forgets their first kiss, my first taste of A&W is seared into my mind. It happened in the summer of 1954, in the great state of New Hampshire.

My family went there for a three-day weekend and at one point we pulled into an A&W. I’d had soda before, and I’d been in drive-in restaurants before, so I figured this one would be like all the others. But — Hell’s Bells! — was I a surprised little poppet. It wasn’t the food that did it (my standard dining out fare being a hot dog slathered in ketchup, mustard and relish). Nor was it the french fries. They were up to my usual gustatory standards, but beyond that, nothing special. But then I took a sip of the root beer, then a huge gulp … and my life was never the same.

If you read about the saints, you’ll often see the same tale told by different tellers: Either they were sinners or nonbelievers or just give-a-crap artists with either no vision of or use for God. But then suddenly — Ka-pow! — they got hit with the Holy Spirit and they were instant believers. That was me. I mean, there I was, your run-of-the mill pisher who didn’t know nuthin’ about nuthin’, and after just one mouthful of A&W’s finest, I believed!

But being a believer, and having an altar to pray on, are two distinctly different things. For after we left New Hampshire, A&W root beer was as easy to find as a unicorn. I don’t know if the one in Wilmington was open back then, but it didn’t matter. There was no reason my family would go to Wilmington, except to take me to the A&W, and there was no reason they’d have done that. Besides, since I was the only one in my family with an A&W jones in my bones, they wouldn’t have understood how I felt even if I’d explained it. They would’ve just dismissed it and told me to drink other root beers.

At the tender age of 7 I accepted the sad reality that A&W visits would have to wait till I grew up. I’ve no idea if that actually happened, but at least I aged and became independent. So if I wanted to go to Wilmington just to get a mug of root beer, I jolly well could. But did I? Yes and no. Over the years I did drive there just for root beer, but not very often. Which worked out well since it always gave me something to look forward to, and was a rare treat when I got there. So last week when Jen Ex said she wanted to go on an adventure, I said I had a great surprise for her.

She shook her head and mumbled something I didn’t quite catch — something about English teachers and impossible personalities, I think. But she got in the car.

When I pulled into A&W, she frowned.

“Sure. Why not?” I said. “Don’t have to hike into Machu Picchu to have an adventure, ya know.”

One thing about J.E. — she’s always a good sport. So even if she gave me a wee jab here and there, she still went along with the shtick. Besides, to my way of thinking, this really WAS an adventure. Catch this: In the 1970’s there were more A&W’s than McDonald’s — about 2,400. Today, there are only 600 in the entire U.S., only eight in New York state, and we have one only minutes from My Home Town. So if that ain’t an adventure, I don’t know what is.

Her order came out first and when I saw it I called over the waitress.

“Is that the medium size mug?” I asked, pointing at it.

“Medium?” I repeated, feeling as moronic as I sounded.

“Um, if the medium’s twenty ounces, how big is the large?” I asked.

Could I actually drink all that in one sitting?

I mulled over it, first telling myself yes, then no, then yes, back and forth, over and over again, till a sudden thought hit me: The next day I had my bi-yearly checkup with my cardiologist, Dr. Tramontano. He’s an excellent doctor in every respect — sharp, thorough, caring. And while he’s pretty low-key, he doesn’t miss a thing — especially if it’s recorded on his office scales. So every time I go in, to no one’s surprise, he tells me I should consider losing five pounds. It’s just a matter of altering my diet a bit, he’ll say. And — also to no one’s surprise — I tell him that, yep, by gum and by golly, that’s just what I’m gonna do … starting next week. Of course, it’s a barefaced lie. And since I’m a terrible liar, he sees right through it — and me.

But catch this: If I passed up the 32 oz. root beer and swilled a mere 20 ounces of the stuff, I could tell the good doctor that not only was I going to lose weight, but I’d already started by cutting back on sugar. And not only did I cut back, but — again doing LCM — 12 over 32 divided by 4 = 3/8ths. So I could tell him I’d reduced my intake of sugar (pause here for emphasis) by more than one third! And since I’d almost be telling the truth, I could probably get away with it.

Plus, the Wilmington A&W closes in mid-October, but my next appointment with Dr. T. is December. Thus I’d have more than enough time to have a 32 ouncer AND lose those nagging five pounds.

So who said you can’t have your root beer and drink it too?