The boys (and one old man) of summer 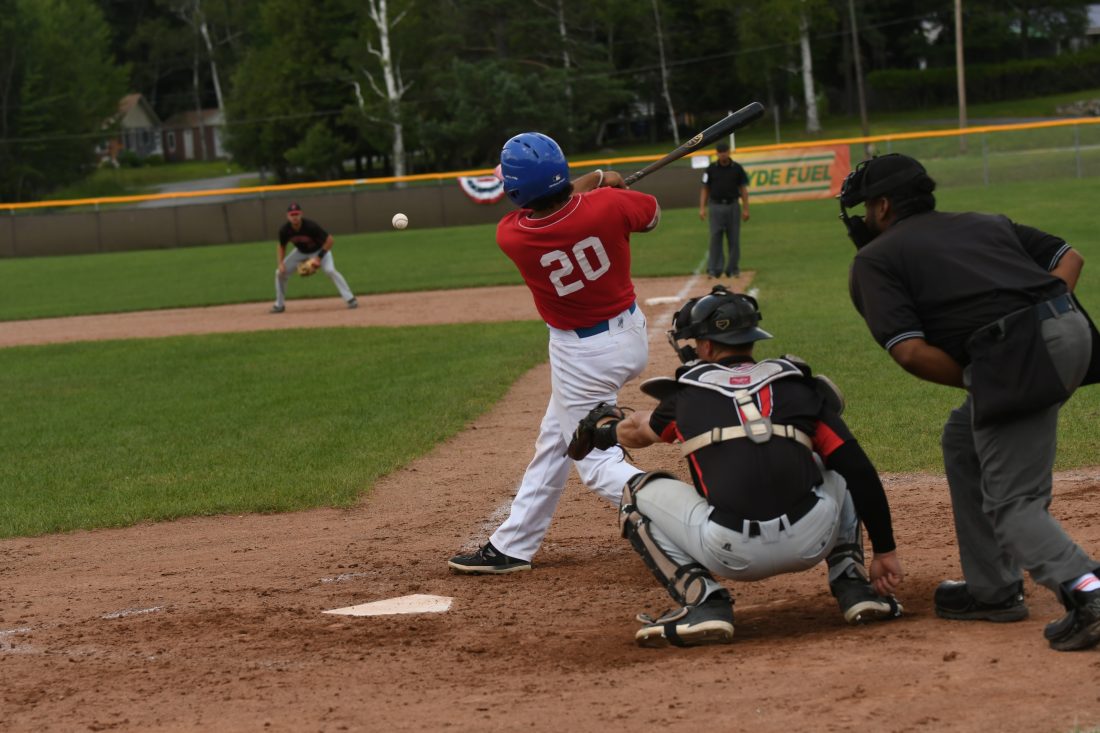 Even as late as the mid-’70s, five bucks was a hefty bit of chump change.

To give you an idea, for a mere fin you could get five packs of cigarettes, 10 beers in a bar, 20 cups of coffee, a full tank of gas for a VW Beetle, three gallons of milk, or two theater tickets.

By contrast, today five bucks won’t get you much of anything. But on Wednesday it got me three hours of great entertainment as I watched the Saranac Lake Surge play the Plattsburgh Thuderbirds on the Petrova field.

It was an impulse decision on my behalf. I’d been telling myself I was going to a game but, for the usual bunch of excuses, hadn’t done it. Ultimately, I’m not much of a sports fan. I haven’t had a TV since I left home, so my access to sports is limited. Beyond that, big-time professional sports and big-time athletes strike me as big-time bumpf.

Yes, they are the best in their field — the best in the world, actually. And all too often they act it. Aside from all their on-field preening, whining, temper tantrums and other juvenile behavior, their off-the-field behavior is also all too often reprehensible. I understand how some pumped-up ‘roid-head who gets ten mill a year thinks he’s worth it, but that doesn’t make me want to watch him, or even hear about him.

And when it comes to them insisting on being paid for autographs — autographs that aren’t worth the paper they’re scrawled on now, and will be worth less 10 years from now? Feh.

Oh yeah, and apparently today’s stadiums are so monstrous that to see a game, you have to watch it on a jumbotron, since the field itself is a couple counties away.

Beyond all that, I don’t know squat about baseball. I mean, yeah, I know the batter tries to hit the ball, and the pitcher tries to see that he doesn’t, and if he does hit the ball, everyone else tries like hell to make sure they get it to first base before he does. But as far as the strategies, like how the fielders play each batter, or when someone’ll steal a base, or when they’ll bunt? Forget it. I also can’t tell what kind of pitch got thrown. A slider? A sinker? A curve? I fastball? Sure, I’ll agree with whatever you say it was, but I can’t tell the difference myself.

So if I’m as baseballistically challenged and blase as I say I am, why did I go to the Surge game? Simple. I figured minor league ball would be everything major league ball is not. And I was right.

No skin in the game

As I walked to the gate, the omens were all in my favor.

First, the gate attendant was a pal, Kathy “The Big Cat” Merritt.

Second (and this is the God’s honest truth), when I handed her my filthy lucre, the music playing was “Hava Nagila.” I was taken aback.

“Are they playing what I think they are?” I said to TBC.

“They musta known you were coming,” she said.

I took a seat in the bleachers just to the right of home plate, leaned back and took in the game.

I already said I don’t understand baseball’s subtleties; beyond that, I didn’t have any skin in the game. Yes, I know the Surge is My Home Town’s team, but I wasn’t a diehard fan, or a fan of any sort. I just wanted to see some good baseball and didn’t care who won.

Some background provided by TBC: Plattsburgh is the league leader, but the day before, the Surge spanked ’em, and spanked ’em good — 7-0. To me, one of sports’ beauties is the upset. Or as my friend Willy used to put it, “On any given day …” So if the Surge cleaned their clock the previous day, they could do it again — regardless of who the odds favored.

They were well-matched for four innings; then in the top of the fifth, the Thunderbirds pulled ahead. With two on base, there was a great bunt and a bad throw to first, and two runners scored. From there on, it looked like the Surge were in position to even it up, but P’burgh scored another run, and at the top of the ninth they scored three runs, and the final score was 9-0.

Up front, personal, and much better

Ultimately, the score itself didn’t reflect how close most of the game was. This made it more enjoyable to me because after all, what fun is watching a one-sided slaughter? None … especially if you’re not a partisan fan, like yours truly.

Plus, throughout the game there were some great plays. I mentioned the bunt that brought in two runs, but there were others. Oddly, I remember only the Surge’s. One was a great throw from the catcher to second base, putting out a guy trying to steal it. Another was a perfect double play in one of the early innings.

But specifics aside, it was fun entertainment from start to finish.

First, there was no down time: The pitchers pitched, the catchers caught, the batters followed each other, with no pauses in between.

Second, unlike watching sports on TV, there were no ads, no gratuitous (and seemingly endless) commentary, and of course no video reruns. All of which made me have to pay attention the whole time. So while I probably missed a bunch of the action, I also probably saw more in real time than I ever would’ve while sitting in a bar, with a small-screen tube 25 feet away. Finally, the players were life-size, literally — not a bunch of 5-inch-high figures, scurrying around in the distance.

And there were all sorts of extras. For one, they played rock music in between at-bats and did it perfectly — just enough for some righteous finger-snappin’ and head-boppin, but no so much that it distracted from the game. The umpires were sharp and consistent — I don’t recall anyone debating any calls, or making the usual displays of “player scorned.” Further, they use only wooden bats, which, when connecting, sound like bats are supposed to. You know, that old-time “Pop!,” instead of the cyberbat “bonk.”

Sock it to ’em

Finally, there was the crowd. Almost all were locals I knew, so it was mostly comfortable Old Home Week for me. But not completely comfortable.

Remember I said I wasn’t a partisan fan and didn’t go there to cheer on the Surge? That’s the truth. But about halfway through the game that changed, and I didn’t notice it till it happened.

About 20 feet away from me was an older couple (in other words, a couple about my age … or younger) in lawn chairs. They were low-key and pleasant enough when the game was scoreless. But after the T’birds scored the first runs, they came alive.

“Great play!” she screamed, when one of the Surge got thrown out at first.

“Yesss!” she yelled when a Surge player struck out.

And so on and so forth.

At first I was only mildly annoyed. But the more they kept it up, the more annoyed I got.

Unconsciously, I gritted my teeth and clenched my fists. Gritted and clenched. Clenched and gritted …

Suddenly I found myself thinking all those thoughts that sports fans I loathe shout at the tops of their lungs.

Or worse. Much, much worse.

Of course, I didn’t actually say any of those things. I would never allow myself to act like that in public.

But it took some effort to restrain myself.

I mean, get real: The least I can do is stand up for our boys, God love ’em!