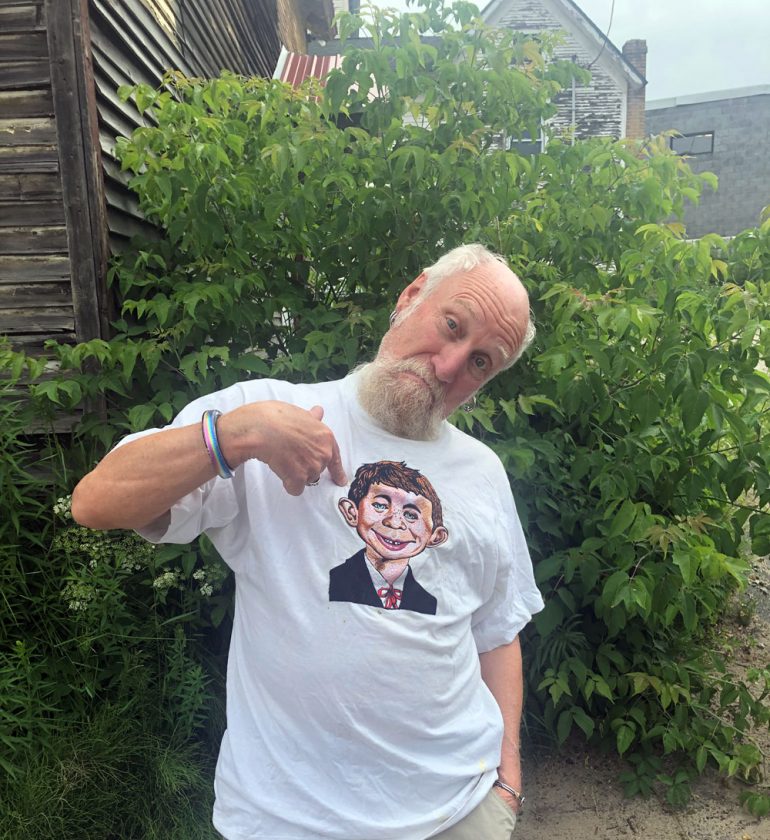 This week when Mad Magazine announced it had stopped publishing, I wasn’t surprised. It was bound to happen in a society like ours – post-literate, if not il-literate.

So while I wasn’t surprised, I was sad. And why wouldn’t I be, since Mad was one of the major influences of my youth.

Of course, like almost everyone back then, I was weaned on the comics. Since newspapers were a household staple, I pored over the funnies as soon as I could read, if not before. I remember following Alley Oop, Dick Tracy and Beetle Bailey.

Beetle Bailey was my favorite because it made the Army look so klutzy, quirky and inefficient. I got lots of laughs from Beetle, Zero, Sarge, Otto (Sarge’s dog), Cookie, Rocky, Lieutenant Fuzz, General Halftrack, et al. It seemed all so impossibly silly to me … at least until I was in the service and realized klutziness and inefficiency were more the Army rule than the exception.

Alfred E. was Mad’s mascot, if not its logo. He was that goofy-looking kid with a mop of red hair and a big smile with a missing front tooth. His accompanying slogan was always, “What, me worry?”

In the fashion of the romantic ’50s, AEN had a girlfriend named Moxie. She looked a lot like him, except where he was goofy, she was cute. Plus, she had all her teeth. Also in the fashion of ’50s romance, it didn’t last very long — only four or so issues, as I recall.

A copy of Mad was a great investment for this cash-strapped kid. There was so much to read (all of which was even funnier upon rereading) that one copy (“25 Cents. Cheap!” as proclaimed on the cover) lasted weeks before it got old. When it did, it was easy to find a kid who’d trade a copy of one I hadn’t read.

It was the barter and recycling systems at their best: With one clean copy and a big enough circle of friends, you could read Mads, old and new, darn near ad infinitum.

The usual gang of idiots

I still remember my favorite artists and their work. Don Martin’s characters had trademark feet: Instead of being level, their toes always curled down. Martin was also a master of cartoon sounds. He had no use for mere Plops, Bangs, Booms or Splats. Instead, he had Ska-looge, Verskreet, Ka-klong and so on.

Sergio Aragones drew those funny little figures in the margins, called of all things Mad Marginals.

Dave Berg drew a strip called “The Lighter Side,” with each issue featuring a new subject. He also drew himself in the strip, but used the name Roger Kaputnik. The strip was funny, but that name alone cracked me up. In fact, it still does.

Then there was Snappy Answers to Stupid Questions by Al Jaffee. The name explains itself, and I still remember one. It was a nurse saying to a patient, “So, how are we today?” And the patient saying, “Between how I feel and how you look, lousy!”

There were movie parodies that made the originals look so moronic that after reading them, I couldn’t figure out why I ever liked the movies in the first place.

And there was much more, which I’ve since forgotten. But what I haven’t forgotten is Mad’s influence on me. The laughter was instantaneous, but what lay behind it was lifelong.

Sure, Mad was funny, but because it was satire, it painted humankind at its weirdest and most inane. And since it was a cartoon mag, it relied on stereotype, among them, adults of every ilk. So there they were, grown-ups as they never wanted to be seen, objects of foolishness and derision. There was the gym teacher/bully, the crabby next-door neighbor, the cowardly cop, the oblivious minister, the nefarious used car salesman, the single-digit-IQ general, the crooked blowhard politician (pardon the redundancy). If the list isn’t endless, it sure should be.

The real gang of idiots

For me, those skewed, screwed-up people and events who populated Mad made an excellent training manual for how to deal with what people are fond of calling “The Real World.” A perfect example was the Responsible Citizenship course my freshman year in college.

The course was considered so important, it was required of all freshmen. The idea behind it was that after one enlightening semester, we’d become knowledgeable, dedicated, Americans of the highest water.

It was held on Monday, Wednesday and Friday. Monday was the lecture, and every week it was the same thing. All 1,500 frosh were seated in the chapel when some dessicated old fart in a tweed shroud creaked his way to the lectern. Then, shaking the dust off notes he’d written during FDR’s first term and hadn’t reviewed since, he’d read, polysyllabic word for polysyllabic word, with no variety of tone, pitch or pace, for what seemed like hours. Then, his allotted time up, he’d pick up his notes and creak his way back to the crypt whence he came.

Wednesday and Friday were discussion sessions, supposedly led by a graduate student. Ours was a goober named Fairborn. He never prepared a lesson, nor did he explain what the old fart had been babbling about in the lecture. Instead, he ran out the clock with ramblings that might include the importation of pig iron, the beauty of the ’56 Ford and the fine points of bullhead fishing, with no clear relationship among any of them.

He’d also regale us with tales of his salad days at Old Siwash, one of which I never forgot, though God knows I tried. It was about how he and his frat brothers decided a great prank would be to kidnap the dean’s rat terrier and hold it for ransom, the ransom being the dean having to climb their flagpole or some such.

Their plan was perfect. One of the bros was the state champion high jumper and thus a natural to leap the fence in the dean’s backyard. After that, he’d snatch the pooch, turn, leap the fence again and make a clean getaway before anyone in the house knew the mutt was gone.

As I said, the plan was perfect. Unfortunately, its execution wasn’t.

Indeed, the bro sailed over the fence and grabbed the dog, but when he turned to leave, Fido turned, too. And after he turned, he bit off a good-sized chunk of the bro’s nose. And after that, as you can imagine, all hell broke loose. The bro was shrieking hysterically, trying to staunch the blood flowing from what was left of his mangled snot locker. Meanwhile, the dog, having won round one, was now cleaning clock in round two, shredding both the bro’s pants and patella.

As for the rest of the brothers? Well, blood may be thicker than water, but discretion is the better part of valor, so they’d all split when the dean hit the yard, scowl on face, shotgun in hand.

I remember that story not because Fairborn told it well but because he told it so often. He told it at least 10 times, always dissolving into hysterics when he got to the nose-chomping. But as vivid a tale as it is, that’s not why I remember him best. Nope, he’s most memorable for something he said toward the end of the semester.

It was after the presidential election in November — LBJ vs. Barry Goldwater. All kinds of crucial issues seemed to be hanging in the balance with that election – increased involvement in Vietnam, social service programs, civil rights legislation, the arms race, federal funds for education, and more. And one day while talking about the election, ever-so-nonchalantly Fairborn said he hadn’t voted.

So dig that: In a course called Responsible Citizenship, which we were forced to take so we could be, uh, responsible citizens, we had an instructor who glibly told us he didn’t vote.

Mad magazine didn’t create either Fairborn or that course, but it sure prepared me for them.