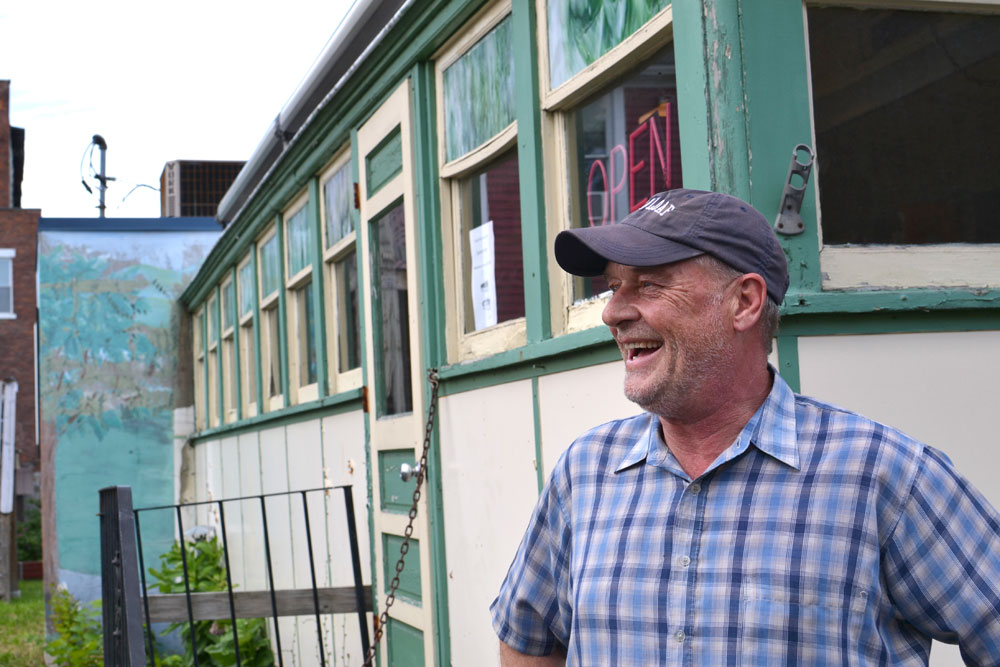 Himself, himself (Photo provided — Bob Seidenstein)

It’s been over 20 years since The Foote Rest closed, and no fortnight has gone by that I haven’t mourned its passing.

The Foote Rest was a cafe across from the Adult Center, before it was the Eat ‘n’ Meet. Its owner, CFO, chief cook and bottle washer was Don Foote, who in my less-than-humble estimate is the Leonardo da Vinci of beaneries. There may be something he doesn’t know about running a cafe, but I doubt it.

First, of course, was the food. It was always delicious, and served at its ideal temperature (a rarity these days, it seems). I remember best his cream of mushroom soup, and especially how it was served — in a bread bowl, made with his home-baked bread from the previous day. ‘Twas a brilliant way to not use dishes and at the same time to not waste food.

Something else about The Foote Rest: The printed menu was pretty small, as you’d expect. But the un-printed one was infinite … at least if you knew how to order from it. It went like this: “Hey Don, make me something that’s not on the menu, willya?” Which he then did.

But The Foote Rest was not about the food — at least not only about it. Don had “The Gift”: Everyone, regardless of age, income, occupation, political leanings, dress or anything — was made to feel welcome. You couldn’t generalize about the clientele because they were too diverse to have one group stand out. It was, in the best sense, a motley crew, and democracy in action.

While I got to know and become friendly with a lot of peeps who hung out there, I spent most of my time with one bunch I dubbed “the town’s least eligible bachelors.” They were the Silver Fox, Three Dollar Bill, Fat Matt, the Duchess and of course yours truly. We were there five nights a week, only because it was closed the other two. We usually arrived for our late-night repast and discussion around 8 and left around 11, after digesting both.

Only two specific things stand out about our hangings-out.

One was what it was like in there during the winter. First, the front door was single-pane louvered glass. And guess what came through the slats between the louvers? If you guessed the frigid Adirondack air, you’re right. On really bitter nights we could see the air come through, as it snaked its way over the slats, down to the floor, and headed directly at us. We could usually see our breath as well.

Then there was the heating system, so to speak. It was no system at all — just a hot air blower in the ceiling that did the best it could, bless its little heart. As a result, we sat directly under the blower, wrapped in coats, scarves and hats. If we hadn’t needed the dexterity to eat and drink, I’m sure we would’ve worn gloves, too. We did all right without gloves, though we had to watch our hands while we ate, since by the time we got served, they’d already lost most feeling.

The other thing I remember was what happened late at night whenever a solo pedestrian walked by. Inevitably, the Duchess would look at them, take a deep breath, sigh heavily and then say, “Another lost soul on the Boulevard of Broken Dreams.” And he said it like he really cared about the “lost soul,” though we knew he didn’t give a tiddly-doo. It was the finest example of white trash noblesse oblige I’ve ever seen.

Strictly speaking, The Foote Rest wasn’t resurrected, so much as was born again. In its new life it became Foote’s Port Henry Diner. As I said, I’d heard about it last year, and of course I kept telling myself I had to check it out, right away. The only problem with “right away” was the diner was right there. And “right there,” in Port Henry, is a haul. For a slug like me, it’d be a world-class challenge to get there before it closes at 2.

Beyond that, I’d ever pass through Port Henry for any reason. Racking my brain, I recalled the last time I went through there was on my way to Boston, back in ’78. But that was then, this is now, and thus a few weeks ago I was cruising my way down there.

As I might’ve expected, FPH Diner is a funky little place. The exterior is a delight — a wooden front that looks like a toy railroad car. The interior is airy and open, with lots of windows and wonderfully bright on that rarest Adirondack occasion — when the sun shines (which it just happened to do when I was there).

The food, also as expected, was delicious. Given my ritualized nature, I had what I always have for breakfast when doin’ my diner thang — a cheese omelet, with home fries. Instead of bread, I had one of Don’s home-baked rolls, slathered in butter, natch. Simple fare, yummy fare, eminently affordable fare. Anything I left over, you’d’ve needed a microscope to see. Good thing I’d called a timeout in my Summer Get Thin and Beautiful Campaign.

And then there was Don, himself. He was as friendly, gracious and gregarious as ever. In between stints in the kitchen, he came out to shoot the breeze. Even though he hadn’t seen any of our crowd in decades, he remembered everyone, asked how they were doing, and swapped some tales from our Good Old Days. And he wasn’t being so solicitous to only me — he was like that to everyone else there as well.

The biggest difference between The Foote Rest and his new place was the menu — it was huge, especially considering he served only breakfast and lunch. When I pointed this out and asked how he managed to do that many dishes, he laughed and said, “It’s the same thing the Chinese restaurants do. They have eight basic main ingredients and six spices, and it’s just a matter of knowing all the ways of combining them. It’s simple.”

Of course it’s simple … once you’ve mastered it. But until you do, it’s not simple. In fact, it’s impossible.

So the next time you’re in the doldrums, want an adventure but don’t want to travel forever and spend a fortune, point your nose toward Port Henry, and then follow it to Don’s place.

Just do me one favor: When you get there, tell him the Dope sent ya.