The man who dared to dream 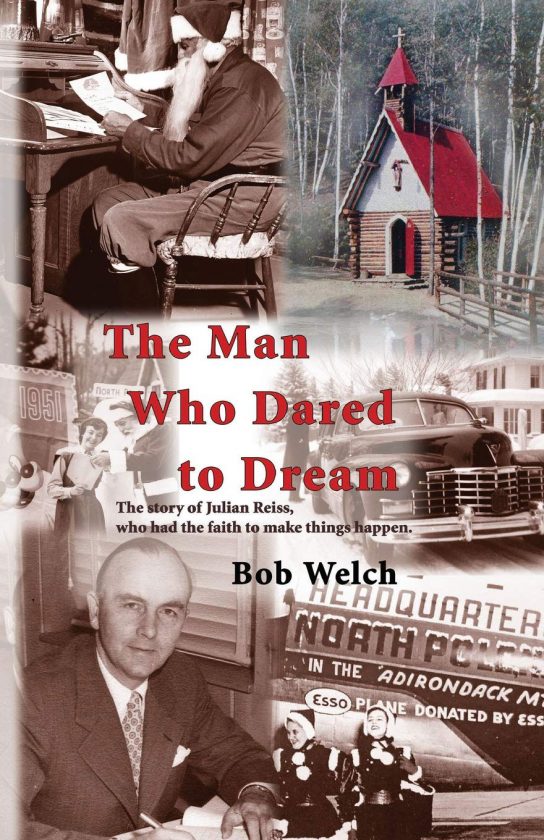 Book cover for "The Man Who Dared to Dream"

BOOK REVIEW: The Man Who Dared to Dream: The Story of Julian Reiss, Who Had the Faith to Make Things Happen, by Bob Welch

During their car trip north in 1947, Julian Reiss (1899-1959) told his daughter Patti (now Patty Brooks) a story about a baby bear who visited the North Pole. “Why can’t we fly to go see Santa at the North Pole?” Patti asked.

That innocent request ultimately led to creation of Santa’s Workshop in Wilmington, New York, the first theme park in America. The story of how that happened gets told appealingly in Bob Welch’s book, “The Man Who Dared to Dream: The Story of Julian Reiss, Who Had the Faith to Make Things Happen” (Husky Trail Press, 2018).

Although perhaps a somewhat hagiographic picture of its subject, the story details a man who grew up comfortably but with a huge social conscience. Reiss was diagnosed with tuberculosis just before beginning law school at age 24. He relocated to Colorado, then a year later to the Adirondacks, where he slept on an unheated porch as part of his treatment.

Once in the North Country, he remained and became a pillar of the Lake Placid community. His efforts helped bring the Olympic Games to Lake Placid in 1932. He had been active in early Civil Rights campaigns as an appointee to the New York State Commission on Antidiscrimination. Another initiative was his institution of profit-sharing into the business plan for his Lake Placid automobile dealership.

“It isn’t enough for the North Pole to look real, it has to be real,” Monaco insisted, knowing it was the kids you had to convince. Much of the process–and many of the most interesting components of the book — saw Reiss as mediator between the others.

(Arto Monaco qualifies as a genuine Adirondack icon in his own right. A skilled artist and designer, he combined those skills with an intuitive grasp of what appealed to children. He died in 2003 at age 90. But that’s fuel for another book.)

The park opened on Fortune’s 25-acre parcel by the Whiteface Mountain Highway on July 1, 1949. It became a prototype for the newly conceived “theme park,” ideal for an era of growing family travel by automobile. Charles Wood drew on it in developing what today is the Great Escape, near Lake George. Walt Disney sent representatives there when beginning to ponder Disneyland. Seventy years later, Santa’s Workshop continues in operation.

There were personal crises along the way, including a plane crash while he was flying Patti home from college one weekend in 1958. The pair were unhurt but had to walk 10 miles out of the woods. Then, a year later, Reiss died at age 60 of cancer, ending a life of commitment— to family, to community, to the broader public.

The book itself is a curious mix of fact, much of it driven by Reiss’ relentless optimism, and a thinly disguised fictional narrative about a kindly grandmother-type hero and a cynical and dissatisfied college girlwho lives in the neighborhood. Their discussions ultimately break down the latter’s adolescent angst.

What the story lacks in dramatic tension is compensated for by the rich moral lessons centered around determination to help one’s fellow man. Reiss is described as “investing his resources for the benefit of others,” useful words to live by in a cynical world. It’s perhaps a good tale to read in a time troubled with international conflict, increasing economic inequality and battles over impeachment.