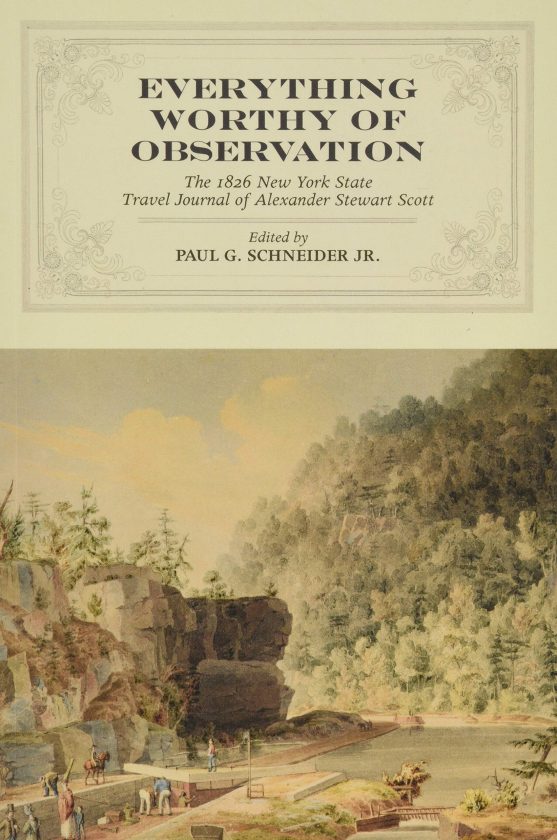 uebec native Alexander Stewart Scott had some time on his hands, and sufficient funds, so he wanted to travel before resuming school. Today he might hitchhike around Europe, bicycle across the country or join something akin to Americorps or the Peace Corps.

But the year was 1826. He decided instead to get a taste of the nation to his south. While wandering he kept a journal. Rediscovered only recently, it’s been transcribed and edited by Paul Schneider Jr. and published under the title “Everything Worthy of Observation” (SUNY Press Excelsior Editions, 2019). It makes for entertaining reading.

His route was straightforward. After starting in his hometown of Quebec City, he headed to Montreal by steamboat, then veered onto the Richelieu River and into Lake Champlain. From there he continued south until reaching the Erie Canal, on which he secured rides on small packet boats, going all the way to Buffalo and Niagara Falls before retracing the same path home.

Why he took this particular trip is never explicitly stated, but there are clues.

We sense Scott travels hoping to meet the opposite sex. Not unlike many young men through the centuries, he has plenty of commentary on young women who cross his path. It turns out he is none too easy to impress.

He travels for education. Scott is studying law, so he savors the opportunity to meet people in his chosen field. He is underwhelmed. Listening in on 20 students being tested for the bar in Utica, he notes “some of them had difficulty answering the most simple practical questions.” Later, at a Court of Common Pleas, he expresses irritation that judges and lawyers don’t wear gowns, “nor in fact any thing to distinguish them from other persons.” Furthermore, many are “very poor speakers.”

Naturally, he also travels for scenery. He deems Plattsburgh and Port Kent “places in themselves poor enough in appearance, but the Country round about delightful.” Lake George, not originally part of his planned itinerary, receives high praise: “the most romantic and beautiful scenery I ever beheld in my life … worth while for any person to travel 500 miles just to have the pleasure of passing through this Lake.”

Like all visitors to the young United States, he wants to see Niagara Falls. He’s suitably awed, especially as he describes perilous footing while walking with a guide on slippery rocks under the grand cascade. Reflecting on the view of Niagara from Table Rock, he writes “to attempt to describe my Feelings while at this spot would be impossible — the sublimity of the scene baffles all description!”

Scott also pays attention to man-made attractions, like the impressive 11-arch aqueduct that carries the Erie Canal OVER the Genesee River in Rochester. A few miles further, he finds something even better, the striking series of five consecutive double canal locks at Lockport, “considered to be the greatest ARTIFICIAL curiosity in this part of America.”

With astonishment, he watches a wooden house being moved on rollers, then gets told brick and stone ones can be moved similarly. And he learns to pay attention, after he’s knocked over when he doesn’t hit the deck soon enough as his canal boat passes beneath one of the many low bridges.

Perhaps most importantly for a young traveler, he begins to understand the value of making up his own mind. At first cautious about the foreign country he’s visiting, he gradually finds his doubts dissolved. “I freely confess that I went among the Americans a good deal prejudiced against them, and now that I am leaving the Country must say that the most part of those bad feelings are done away with.”

The book is well edited. There’s never an unfamiliar term that doesn’t get explained. Though often providing entertaining commentary, maybe the end notes are too copious. I’m not sure I needed to know about absolutely every individual he encountered along the way. But the journal itself is the main attraction. It far surpasses any description a modern traveler will give via Twitter!