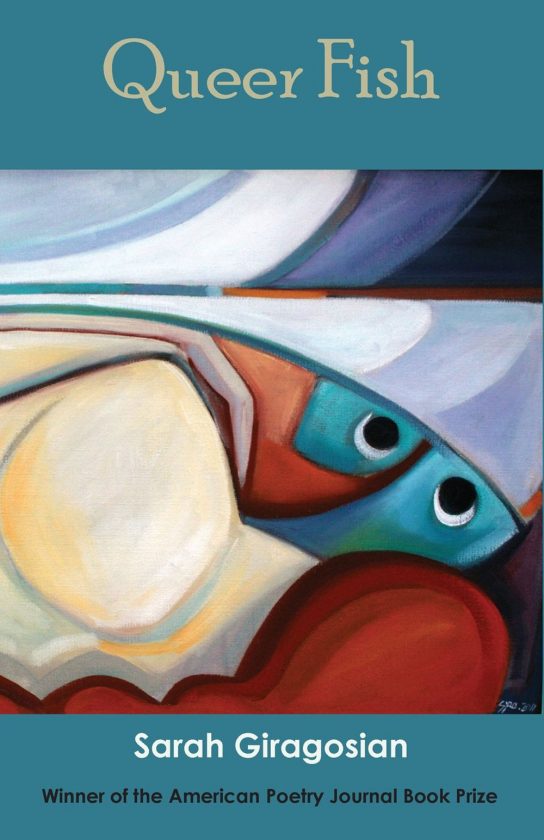 In an early poem in this volume, “Queer Fish,” Sarah Giragosian writes: “nothing can be drab so long / as objects hold allure as intimates.” These poems take all manner of creatures great and small as intimates. Giragosian dreams herself inside an anglerfish, gives voice to a spider, queries a shark, loves in the form of a hedgehog. In these poems the human and wild merge and emerge as they explore themes of love, lust, survival and joy.

These are layered poems, with indications of meanings and metaphors that shift as we understand the creatures as both wild and as an expression of the human. In “When the Horseshoe Crab Grieves,” we understand the human truth of: “All of us know the swift feedback / of pain, even the armored ones like me.” It ends: “Everywhere along the shore we cry for love / and the sweeping arms of the green sea.”

“[I] am not a fish or a woman, / but the nocturnal verb / that brushes up between you and me,” states “The Anglerfish Finds Her Muse,” in a poem both funny in its description of the anglerfish’s odd features but moving in its intimacy.

In “The Lioness,” perhaps the most emotionally difficult of the poems, the speaker is at first a narrator but by the end has merged into the form of the lioness, who has discovered her cub has been victim of a predator. It begins: “After the attacker leaves, the lioness / finds her cub splayed and half-gone. / She laps his face, his breast / his haunches,” and then in the way of the wild, she takes the body back into herself. And by the end the narrative voice has shifted from third-person to first:

Above, the vultures wait then flag, thwarted.

In the economies of death,

let there be no waste,

and if there is a witness overhead,

These are playful poems, often, but they are not fooling around. In “All at Sea” she takes on the ancient history of all life on earth and the devastating impact of human action:

Do you remember the coastlines

and their riches before we branched off limbs

and stood ashore, our infant knees trembling forth?

And can you dream her up as she was then

before our fatal bloom across her giving breast?

Giragosian, a SUNY Albany professor and Schenectady resident, won the American Poetry Journal Book Prize for these poems, and many of them had been published in fine poetry journals across the country. This is a poet to watch for.