Boats at the bottom of Lake George 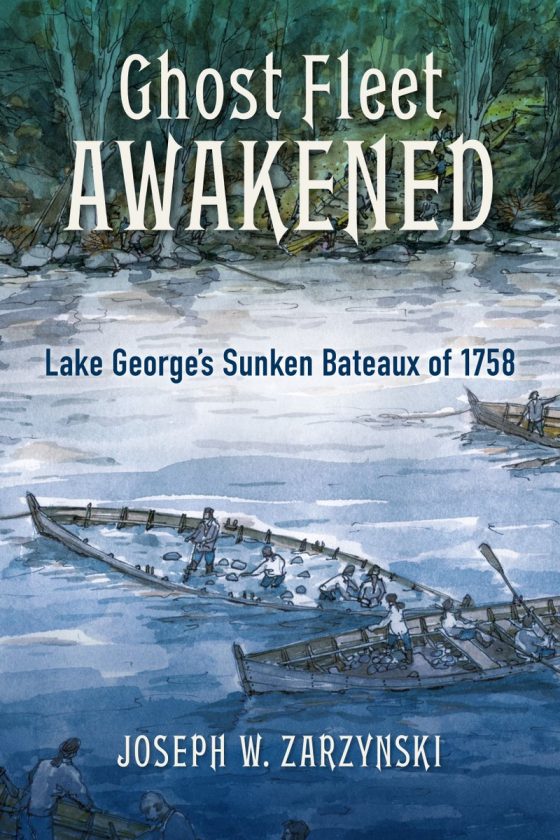 The early military history of New York follows its waterways. The Hudson, Mohawk and St. Lawrence rivers, Lakes George and Champlain were the highways and the battlefields. Noted maritime explorer Joseph W. Zarzynski’s “Ghost Fleet Awakened: Lake George’s Sunken Bateaux of 1758” focuses first on vessels used on those highways and in those battles, and then explores related archaeological aspects.

Zarzynski first visited Lake George’s underwater fleet in July of 1982, and again in 1987. That second dive into history was sponsored by the Atlantic Alliance for Maritime Heritage Conservation, and was the beginning of the author’s commitment to discovery and preservation that is chronicled so well in this excellent book.

Starting at the beginning, Zarzynski defines “bateau” by quoting naval architect Howard I. Chapelle: “The French word ‘bateau’ meant no more than ‘boat’ in the first years of the French settlement in Canada, but early in the eighteenth century this word had become accepted as a type-name for a double-ended, flat-bottom, chine-built small boat much used along the St. Lawrence and on the American lakes.”

The bateaux Chapelle describes, and which the British constructed, ended up at the bottom of Lake George. They were sunk by the British themselves in 1758 during the French and Indian war, sunk so their enemies would not be able to use them. The British plan was to raise them and repair them in the spring of 1759, but they were still on the bottom in the 1980s.

“Ghost Fleet” is about those boats, their construction in the 1700s and their discovery in the 1900s. It is also about ownership and preservation of historical artifacts, especially maritime items. Zarzynski brings his passion to the discussion of the need to preserve and the players involved.

In addition to his underwater archaeology, Zarzynski was a longtime social studies teacher in the Saratoga Springs City School District. He was the advisor to seventh-graders in that school system when they constructed a bateau skeleton out of PVC pipe, part of an Industrial Arts enrichment program, helped by the Lake Gorge Bateau Research Team. What a gift to those students — so much good education is present in that enterprise: history, engineering, discovery, construction, co-operation, team-building.

Like a true teacher, Zarzynski’s effort is always to communicate what he has learned. This book is about what was found on the bottom of a lake, how it can be preserved, and how it can be shared. A chapter such as “Documentary Filmmaking, Bateaux and Archaeologists” is an example of that effort to bring this knowledge to the surface.

“Ghost Fleet” teaches us about the past and how to preserve it for the future.