Set in the future, this novel begins in 1858 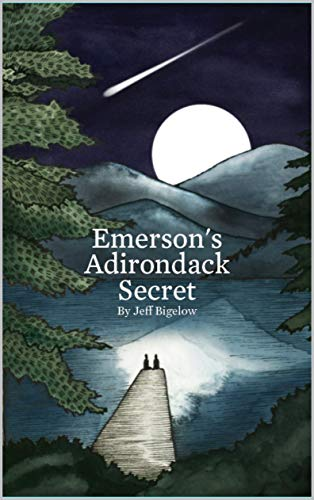 The novel begins in 2028 in a divided America. The ideological rancor we now see in Washington, D.C., and cable news created a “Great Secession,” and the United States is no longer united but rather six (Southern, Northeast, Midwest, Texas, Mountain, Pacific) republics. Like gated communities, the republics are populated with like-minded people.

But as the title suggests, this novel is also about the past, specifically the famous 1858 gathering of ten intellectuals at Follensby Pond, south of Tupper Lake, in 1858 — philosopher-essayist-poet Ralph Waldo Emerson being one of those intellectuals. Much has been written about that event, James Schlett’s 2015 scholarly “A Not Too Greatly Changed Eden: The Story of the Philosophers’ Camp in the Adirondacks” being a wonderful example.

Bigelow, however, asks, what if Emerson had brought an object to the philosophers’ camp that had been sent to earth by aliens? And where might that object be now? Three friends — Riley, Jasper and Ingrid — search for answers to those questions. Of course, bad people are also searching for the mysterious item Emerson brought from Walden Pond to the Adirondacks. And so the adventure begins.

The Follensby Pond campers surely talked about weighty matters, and Jasper and Ingrid, while traversing and searching and being pursued in the Adirondacks, also discuss serious issues, the topics they talked about when they were in college. Jasper does most of the talking — about food, climate change, evangelicalism, Christianity, fossil fuels, sectionalism, partisanship, etc. Some of it sounds like those intense late-night arguments young people have when they are much surer of themselves than they are later in life.

In “Emerson’s Adirondack Secret,” America’s inability to discuss those issues and find common ground had led to the Great Secession and the various republics American citizens retreated to. The novel can be read as a fictive answer to the question, “What will happen if we don’t learn how to talk to each other about the issues that divide us?”

The characters in the republics are not subtly drawn. Some caricatures are as broad as “Saturday Night Live” sketches, and like TV’s “M.A.S.H,,” the good guys get the good lines.

Science fiction is often moralistic at its core, and “Emerson” is, too. For indeed, Henry David Thoreau’s friend Emerson did bring an object to Follensby from Walden Pond. And Jasper and Ingrid, after a adventure that includes sliding down Lake Placid’s Intervale ski-jump on their rear ends(!) and a boat pursuit on Lake Champlain, find the object, which contains a message.

The message, of course, is not new, which makes sense for a book set in both 1858 and 2030. In fact, it is reminiscent of what Michael Rennie tells us in the movie “The Day the Earth Stood Still.” (Do you remember Patricia Neal telling robot Gort, “Klaatu barada niktu”?)

Jeff Bigelow’s “Emerson’s Adirondack Secret” is an over-the-top adventure with its roots in the Adirondacks. It’s good fun, full of local landmarks and history, and indicates that Mr. Bigelow, who can write, should keep at it.