Guideboat book has many uses 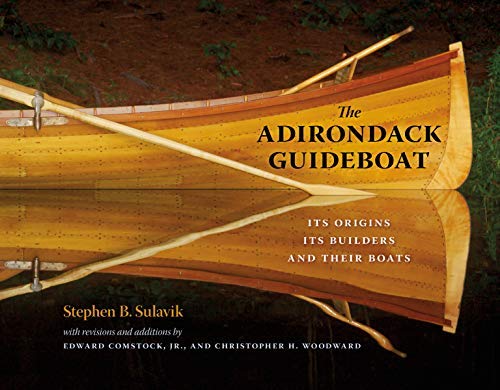 “The Adirondack Guideboat: Its Origins, Its Builders and Their Boats,” a recently published book (Bauhan Publishing, 2018) by Stephen Sulavik on the topic, may prove to be close to the last word on the subject.

The book has multiple uses.

Everyone interested in Adirondack history will want to read the 60-page section that traces the evolution of this legendary watercraft. Before guideboats, there were canoes and punts. Then the so-called Saranac boat was introduced on Lower Saranac Lake around 1850. The writers credit the first one to William Austin of Long Lake. Shortly afterward, Caleb Chase of Newcomb purportedly made the first true double-ended guideboat.

Right from the beginning, these craft manifested meticulous woodworking, the use of native species and attractive appearance. And light weight, so that via a hand-carved yoke, they could be carried for modest distances by one person. There’s plenty of detail on design, with schematic drawings and a glossary to help novices navigate the terminology. You won’t learn to build a guideboat from this book, but you’ll grasp what goes into the process. Like cutting the ribs from the natural curves of red spruce root crooks.

In the next part of the book, there are profiles of literally dozens of guideboat makers, past and present. This section fills over two-thirds of the volume. A few people, such as Henry Rushton, Frederick Rice and Willard Hamner, were familiar to me, as they surely will be to others with a deep interest in regional history. Many others were not. And who knew so many distinct styles of guideboat had been delineated?

When over 100 builders are profiled, a reader can expect a few unusual people. Like Fred Burns of Long Lake, who didn’t begin making guideboats until he was 76. And Speculator’s John Buyce, who also crafted buckboards and those giant snow rollers that packed down roads in the winter during the 19th century. The aforementioned Caleb Chase supplemented his boatbuilding career with work as a gunsmith. The tendency to blend multiple jobs in the Adirondacks is not a new phenomenon.

Finally, there are those who either make such boats themselves or who own, or are aware of, a few antique specimens. In a section entitled “Who Built That Boat?” individuals will find an atlas of styles and proposed strategies sufficient to allow identification of the maker for virtually any old guideboat you find.

Incidentally, the book is also worthwhile for its collection of photographs, the majority of which are from the Adirondack Experience collections. Some are primarily historic in interest, including the first picture I’ve seen of Mark Twain in the Adirondacks. But as one might expect, there’s also a rich array of boats for viewing. Nothing beats seeing them in person, but this will whet your appetite to do so.

Sections of the book will vary in readability, as can sometimes be the case with such painstaking research. All should enjoy the first part, outlining the evolution of these quintessential Adirondack products. The largest component, on guideboat makers, and the final chapter on unique identifiers beckon for browsing more that close reading. This is a volume to be opened again and again over time.

The book was a labor of love, and unfortunately publication came posthumously for the primary author. However, Sulavik, aided by later contributors Edward Comstock Jr. and Christopher Woodward, has left a legacy that will stand up for many years. Both for leisure reading and as a research resource, this project has earned its place on the Adirondack bookshelf.