Novella tells of woman’s survival in the woods 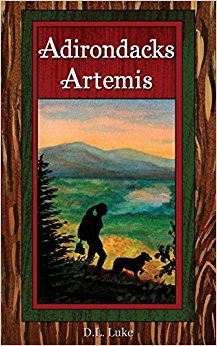 “Adirondacks Artemis,” written by D.L. Luke, is a novella set in Clinton County in the Adirondack wilderness.

It’s a story about survival and healing. The premise is noted to be autobiographical, but the events are fiction.

The main protagonist of the story is named after the Greek goddess of nature and the hunt, protector of young women and eternal virgin. But similar to the mythological Artemis, the protagonist in the story can’t seem to avoid bad relationships. “Adirondacks Artemis” is certainly in a bad one. Frankly, it’s a murderous one. She’s left to survive (or die?) on her own in the middle of the wilderness, abandoned by her alcoholic boyfriend after they bushwhacked together off the trail for a primitive camping trip. When the book begins, Aaron has left her alone without a map or any equipment with which to navigate, and Artemis must find her own way back with only her dog Jesse to accompany her.

Alone in the woods, Artemis is faced with two types of dangers. First are the natural dangers that threaten her physical well-being: the cold October nights, the beautiful but unforgiving landscape and the hungry predators that prowl her campsite. The second danger is to her own psychological and spiritual health, and while she treks back toward civilization, she considers how she came to be in (yet another) failed relationship with (yet another) alcoholic man. The real mystery in the story is whether she will survive and heal from the second type of insult she repeatedly incurs.

D.L. Luke does a wonderful job capturing the atmosphere of the Adirondacks and describes the wilderness with precision. A reader can almost smell the balsam. The author manages to fairly seamlessly insert some pertinent history of the Adirondacks as a locale for healing and allows flashbacks to the narrator’s time at her grandmother’s cabin to flow naturally as Artemis searches for a way back to civilization.

While the setting and the premise are engaging, at times the narrator relates too many intellectual quotes. Siddhartha, Nietzsche, Jung and many others are referenced too many times to count. It is entirely possible the author is using these quotes to demonstrate that due to a lifetime of abuse and manipulative relationships, Artemis is unable to make her own judgements or settle on her own philosophy. But the quotes are too frequent and the engaging voice of Artemis is interrupted too often. In the end, the reader is left thinking that Artemis’s time alone in the wilderness wasn’t long enough.

At the end of the story, Artemis’ issues are only partially resolved. She seems to need more time alone to continue the healing that has begun. Instead of planning to have her boyfriend arrested for attempted murder, she makes excuses that maybe she spoke too harshly to him and caused him to abandon her. And the way the reader knows she’s returned to civilization and the same life, and likely the same mistakes she made before, is because she finds a lost dog — a member of a maligned dog breed, who is really friendly and just needs to be understood. As the book closes, Artemis and Jesse join the companionship of their new friend, a pit bull.

Adirondacks Artemis gives an almost perfect rendering of the Adirondack wilderness. That rendering is accompanied by what amounts to a journal of self-help and healing. But the truth is, the Adirondacks are a fine place to record those efforts.