An introduction to viruses 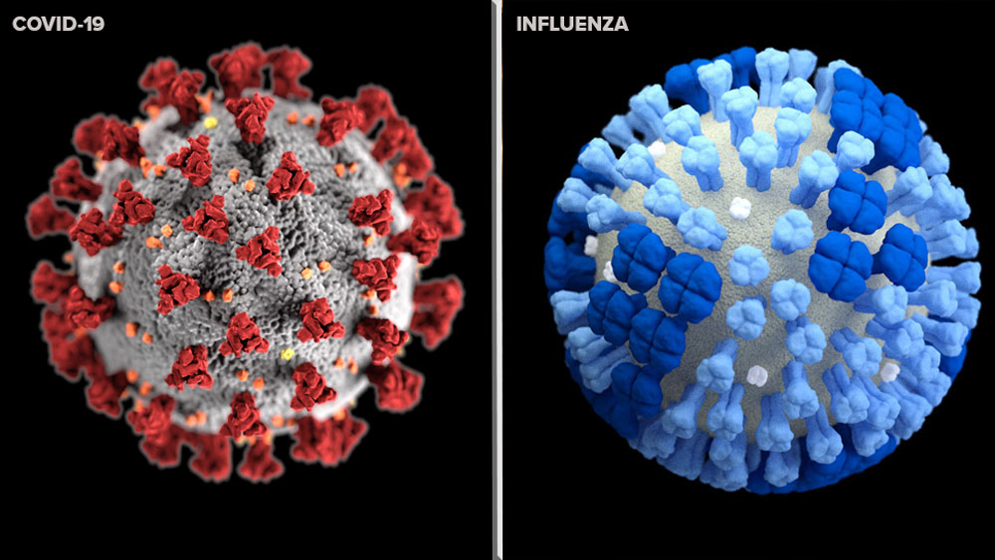 At left is what the COVID-19 coronavirus looks like under a microscope. At right is what an influenza virus looks like. (Images provided — U.S. Centers for Disease Control and Prevention)

I’ve heard it said that there are 10 million times more viruses on Earth than there are stars in the universe, maybe more. And that scientists estimate that, at any given moment, there are more than a billion viruses present on Earth.

Viruses are smaller than bacteria. For example, at 45 nanometers (1 nanometer = 0.000001 millimeter), the hepatitis virus is approximately 40 times smaller than E.coli. By comparison, a human red blood cell is around 6,000 to 8,000 nanometers in diameter.

Bacteria are single-celled microorganisms, most of which are harmless to people. Some are even beneficial (e.g. Lactobacillus acidophilus, which is found in yogurt and, after digestion, resides in the intestines, participates in the digestion process, and aids in preventing the growth of harmful bacteria). Others are not and cause diseases including strep throat, urinary tract infections and tuberculosis. But perhaps the most important distinction between bacteria and viruses is that, unlike bacteria, antibiotic drugs are ineffective against viruses.

What is a virus?

The word virus comes from the Latin “virus,” meaning poison or noxious substance. Simply stated, viruses are any of a large group of sub-microscopic infectious agents, which produce a wide range of significant diseases in humans, animals and plants.

Outside of a host cell, viruses don’t use any energy. But when a virus particle, or virion, comes into contact with a host, the virus becomes active, injecting its viral nucleic acid (and sometimes a few enzymes) into the host cell. The virion then uses the host cell’s energy and tools to create more viruses.

By helping the body to build an immune system response against specific viruses, vaccines have been effective at preventing some types of human viral infections.

Identifying a virus for the first time

In 1886, Adolph Mayer, director of the Agricultural Experiment Station in Wageningen, Holland, published a research paper titled “Concerning the Mosaic Disease of Tobacco,” in which he noted that “tobacco mosaic disease” could be transferred between plants by crushing infected leaves and injecting the extracted juice into the veins of healthy tobacco leaves. Although he was confident that the disease was spread by bacteria, he was unable to isolate the disease-causing agent, identify it using an optical microscope, or recreate it by injecting healthy plants with any known bacteria.

In 1898, Dutch scientist Martinus Beijerinck proposed that tobacco mosaic disease was caused not by bacteria but by a poison, a “filterable virus.” But it wasn’t until 1939 that Ernst Ruska, a German physicist, and Max Knoll, a German electrical engineer — using the recently developed high-resolution technology of the electron microscope, which they’d invented in 1931 — were actually able to see, identify and micrograph the tobacco mosaic virus.

Coronaviruses get their name because of their crown-like shape. Although they were first identified in the 1960s, we still don’t know where they come from. According to the World Health Organization, coronaviruses are a large family of viruses that cause illness ranging from the common cold to more severe diseases, such as Middle East Respiratory Syndrome (MERS) and Severe Acute Respiratory Syndrome (SARS). Coronaviruses are zoonotic, meaning they are transmitted between animals and people. Detailed investigations found that SARS was transmitted from civet cats to humans and MERS from dromedary camels to humans. Several known coronaviruses circulating in animals have not yet infected people (e.g. feline coronavirus).

Coronaviruses typically travel through the air in tiny droplets that are produced when a sick person coughs, sneezes, talks or breathes. Those droplets fall to the ground within about 6 feet.

COVID-19 is a new strain of coronavirus that was discovered in 2019 and had not been previously identified in humans. It’s part of the larger family of coronaviruses.

Common signs of infection include respiratory symptoms, fever, cough, shortness of breath and breathing difficulties. Symptoms typically go away in a few days. But if a coronavirus infection spreads to the lower respiratory tract (your windpipe and your lungs), it can cause pneumonia, especially in older people, people with heart disease or people with weakened immune systems. Infection may also cause severe acute respiratory syndrome, kidney failure and death.

Standard recommendations to prevent infection spread include regular hand washing, covering your mouth and nose when coughing or sneezing, and avoiding close contact with anyone who is coughing, sneezing or showing any other symptoms of respiratory illness.

There is now widespread community transmission of COVID-19, meaning that sources of new infections are unknown. Experts estimate that the incubation period is somewhere between two and 11 days, although at the time of this writing, they have yet to determine if the new coronavirus can be caught from individuals who aren’t symptomatic. Therefore, the federal government is stating that you need to isolate yourself and self-monitor at home for 14 days, even if you don’t have symptoms.