This ruffed grouse strutted right up to me — close enough for good picture taking — and just hung out. (Provided photo — Richard Gast) 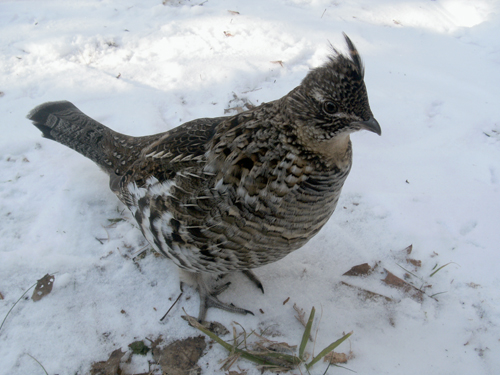 This ruffed grouse strutted right up to me — close enough for good picture taking — and just hung out. (Provided photo — Richard Gast)

Close encounters with wildlife have always fascinated me. But the behavior of wild animals can be, at best, difficult to understand and, at times, totally unpredictable. I once grappled with a robin who returned year after year, only to spend the entire summer flying into my office window in a seemingly endless war with its reflection.

Just last month, I was outside beside the woodpile, getting ready to bring in some firewood, when a male ruffed grouse (Bonasa umbellus) stepped out from under a small spruce tree, fearlessly strutted right up to me and steadfastly stood there on the ground, literally underfoot. I was actually afraid that I’d accidentally step on him.

Now, I’ve always thought of ruffed grouse as being at least somewhat human-averse. But he just hung out there, clucking and cooing and attentively watching me work. At one point, he even flew up and perched on the side of my wheelbarrow.

Once I’d loaded the barrow with firewood, I took hold of the handles and headed back toward the house, figuring he’d leave. Much to my surprise, however, he elected to walk right beside me all the way to the door and stand right there while I brought the wood in. When I stepped back outside to put the wheelbarrow away, he continued to follow me around like a puppy until I went back inside.

A short while later, I opened the door and looked around, but didn’t see him anywhere … until I stepped outside and walked a few feet into the yard. There he was, sitting on the roof almost directly above the door. Sure enough, he flew down and landed on the ground right beside me. 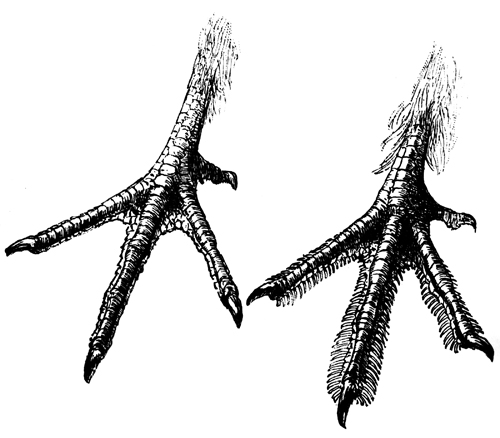 I quickly ran into the kitchen, grabbed some greens and a small handful of split peas (I’d been soaking them for soup) and returned to the yard. I put the greens on the ground, and he ate them. I held out my open hand with some of the peas in it, and, much to my surprise, the tenacious little visitor plucked away at them. He wasn’t at all distrustful. I put the rest of the peas on the ground beside him. And he ate them, too.

Later that day, my neighbors had a similar encounter with the same bird, while shoveling snow.

The following morning, when I headed outside to fill the bird feeder, he was pecking around on the ground, breakfasting. I crouched down beside him, offered him some sunflower seeds, and he took them from me.

I was enjoying the contact and appreciating just how approachable the bird was — or at least appeared to be — when he did something completely unexpected. Without warning, he jumped up into my face, flapping his wings around my head. I never felt like I was in danger, but I realized that, although on the surface everything appeared very friendly, it really wasn’t. This seemingly tame ruffed grouse was, in fact, a wild bird establishing its territory.

Ruffed grouse are extremely well-adapted to winter. They have feathers that partially cover and insulate their legs. And as temperatures fall, they grow feathers around their beaks, which cover their nostrils, enabling them to breathe in warmer air. They grow tough, thick-set bristles, called pectinations, from their toes. These pectinations, which improve their ability to walk across snow and grip icy branches while perched and feeding, fall off in the spring.

Ruffed grouse feed on nutrient-rich buds found in the thinner branches of deciduous tree crowns. And because they have uncommonly large crops (pouches where food is stored and later supplied to the gizzard for digestion), they consume enough food to provide energy for an entire day or night in minutes — unlike many birds (e.g. chickadees), which must forage persistently throughout the day.

When snow cover is minimal, ruffed grouse roost in stands of conifers, which offer shelter from the wind. But as snow deepens, they burrow or, perhaps more accurately, plunge into and bury themselves in the soft, deep snow and drifts, which provide insulating protection from extreme cold and may also reduce the risk of predation.

Despite declines in their numbers over the past 40 years, ruffed grouse are still common in New York, particularly in younger forests. They are challenging quarry, popular with hunters who anticipate one that, as they approach, will explode out of the snow and rapidly fly off, dodging trees and darting through thick cover.

Habitat that provides adequate cover and food resources can greatly increase ruffed grouse survival. By patch-cutting to create young forest thickets with high stem density, and/or favoring mixed-aged groves of aspen, spruce, balsam and birch, forest landowners can establish grouse habitat within their woodlots. Because young stands of trees are important for both cover and food, grouse populations are higher in areas where prescribed logging and/or other disturbances create early succession forests. As sunlight reaches the ground, the new herbaceous growth may provide ample forage for deer as well. Populations of ruffed grouse are lower in mature forests and in small patches of woods surrounded by agricultural lands.