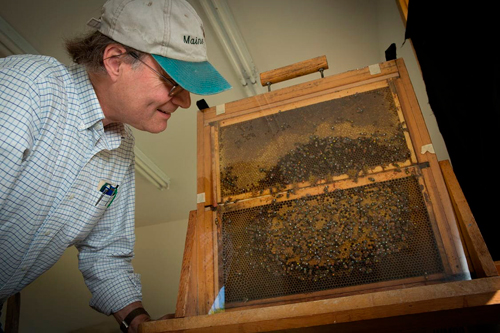 Whether you’re considering starting your own apiary, need to brush up on your bee and beekeeping knowledge, or just curious about what’s involved, join Cornell Cooperative Extension and Hex and Hop Brewery for an “Improve your Beekeeping Knowledge” Workshop.

The workshop, which is intended to provide a general understanding of how honeybee colonies are started and managed, is a terrific opportunity to find out what all the buzz is about. Anyone interested in bees and their impact on our environment is also encouraged to attend.

Food and beverages (alcoholic and non-alcoholic) will be available for purchase, or feel free to bring your own food and NON-alcoholic beverage.

During this two-hour educational workshop, you’ll have an opportunity to learn and ask questions about:

¯ functioning as a society

¯ getting started in beekeeping

¯ types of beehives, pros and cons

¯ anything you can think of.

The honeybee, Apis mellifera, is the most widely used managed bee in the world. According to the American Beekeeping Federation:

¯ There are an estimated 4,700 beekeepers with roughly 2.7 million managed honeybee colonies in the U.S. today, two-thirds of which travel the country each year pollinating crops and producing honey and beeswax.

¯ Honeybees pollinate $15 billion worth of food crops every year.

Honeybees and other pollinators are essential for maintaining floral diversity and for producing many important agricultural crops that feed residents of New York and other areas of the world. Among them are almonds, oranges, apples, cherries, pears, cranberries, blueberries, raspberries, alfalfa, soy beans, sugar beets, asparagus, broccoli, squash, tomatoes, green beans, carrots and onions — some of which depend entirely on insects for pollination. The others don’t require pollination to reproduce, but benefit from increased quality and yields when pollinators are involved.

A well-known global calculation is that one-third of our food is derived through pollination. According to a Cornell University study analyzing the economic value of honeybees and other pollinators for 58 crops, honeybees and other insects contributed $29 billion to farm income in 2010. The study, which was published in a 2012 issue of the journal Public Library of Science ONE, found that honeybees alone pollinated $19.2 billion worth of crops. The study was funded in part by a grant from the National Honey Board.

Beekeepers maintain an estimated 80,000 colonies in New York state. Commercial migratory beekeepers transport their hives to pollinate almonds in California, apples and pumpkins in Pennsylvania, blueberries and cranberries in Maine, citrus in Florida, and cucumbers and blueberries in New Jersey. Providing pollination services is a growing business which, along with profits from honey and other hive products, contributes to beekeepers’ incomes.

When a honeybee colony becomes crowded, the bees will produce and rear a new queen. When the new queen is almost mature, the old queen leaves the hive, followed by at least one-half of the worker bees and some of the drones. Truly wild honeybees are nonexistent in North America. Any swarm you see can be traced back to an apiary.

While the sudden appearance of a swarm of honeybees may be frightening, honeybees within a new swarm rarely sting and should simply be left alone and admired from a distance, unless the swarm poses a specific threat or inconvenience. Most likely, the bees will remain for no more than a few days before flying away to establish their new home.

If you have a honeybee swarm on your property and would like to have it removed, contact a local beekeeper, beekeeping club or your local Cornell Cooperative Extension Office.

Would you like to learn more about honeybees and other wild and managed pollinators? Cornell University has a dynamic network of pollinator research and Extension programs related to all aspects of pollinator life. To learn more, visit pollinator.cals.cornell.edu online.

Where: Hex and Hop Brewery and Taproom, 1719 state Route 3, Bloomingdale

Registration: Pre-registration is requested on or before Jan. 22.