Origins and history of Christmas trees 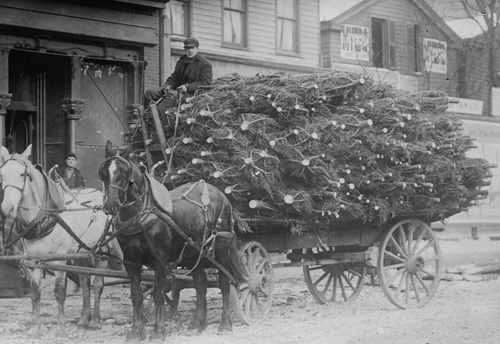 As far as I’m concerned, Christmas just isn’t Christmas without a beautifully decorated, real Christmas tree. Real trees have a stately presence and rich, fragrant aroma that awakens the senses, bringing the forest into the home and warmly welcoming everyone that enters.

The Christmas tree tradition can be traced back to the Roman celebration of the Winter Solstice — the festival of Saturnalia, the pagan feast of Saturn, god of the harvest–when evergreens were used to decorate homes and temples. Saturnalia was also a time for decorating trees, exchanging presents and going door to door singing (caroling) in exchange for food, drink and gifts. In northern Europe, the Celts and Scandinavians brought evergreen trees into their homes and hung bells and food items from the branches, so the spirits of the trees would be warm and comfortable and, in return, bless the home’s inhabitants.

Christmas trees, as we know them today, may have their origin in the work of a Catholic monk, St. Boniface of Crediton (680-754), a missionary to the Germanic people who in 725 challenged a group of pagans preparing a sacrifice at the base of Thor’s oak, an old and sacred tree growing in the town of Geismar in central Germany. He rebuked the actions of the assembled crowd and cut down their hallowed oak, saying to them, “Here the cross of Christ shall break the hammer of the false god Thor.” Then he instructed them to gather around a small, attractive fir tree growing within the roots of the fallen oak, identifying it as a “sign of an endless life, for its leaves are evergreen,” and calling it “the tree of the Christ child.”

From the 9th through the 16th centuries, plays, known as mystery or miracle plays were used to teach biblical stories. Among the most popular was the Paradise Play, which depicted the story of Adam and Eve and ended with the promise of the coming savior. (It’s worth noting that early church calendars of saints designated Dec. 24 as Adam and Eve’s day.) The play’s central prop was the Paradise Tree, a large evergreen, its branches laden with apples and nuts. Over time, the Paradise Tree would be renamed the Christbaum, or Christ Tree, its branches decorated with pastry and marzipan in the shape of hearts, stars, bells, animals and angels.

In the English-speaking world, the popularity of Christmas trees is widely attributed to Clement Clarke Moore’s 1822 poem, “‘Twas The Night Before Christmas,'” which also helped popularize our modern-day Santa Claus, and to Queen Victoria or, more accurately, her husband Prince Albert, a native of Saxony (now part of Germany), who famously set up an elaborate Christbaum at Windsor Castle in 1841. The royal Christmas tree was decorated with candles, the first account of using lighted candles as decorations on a Christmas tree. And presents were hung from its boughs. 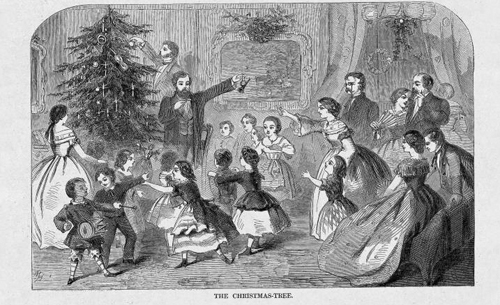 At the same time, German and Dutch immigrants were introducing the customs of Christmas trees and presents to the United States, with the first record of trees being taken from the forest to be sold commercially dating back to 1851.

In 1853, President Franklin Pierce became the first American president to bring a Christmas tree into the White House. During that year, Sears, Roebuck and Company began selling artificial Christmas trees. An artificial tree with 33 limbs sold for 50 cents. One with 55 limbs cost $1. Late in the century, the first glass ornaments were introduced as Christmas tree decorations.

In 1901, President Theodore Roosevelt, believing Christmas tree harvesting was contributing to the destruction of national forests, literally tried to outlaw them, actually banning Christmas from the White House. Fortunately, his sons, who didn’t agree with him, enlisted the help of Gifford Pinchot, generally regarded as the father of American conservation, to convince the president that the practice was not harmful to the forests when trees were sustainably harvested. Pinchot recommended planting two trees for every one that was cut down.

During the 1930s, our other President Roosevelt, Franklin D., popularized the concept of Christmas tree farming by growing Christmas trees at his Hyde Park, New York, estate.

In 1966, the National Christmas Tree Association began its now time-honored tradition of having the Association Grand Champion grower present a Christmas tree to the first lady for display in the Blue Room of the White House. That year, Howard Pierce of Black River Falls, Wisconsin, presented a tree to President Lyndon Johnson and First Lady Claudia Taylor “Lady Bird” Johnson. This year’s tree came from Mahantongo Valley Farms in Pitman, Pennsylvania.

Celebrate the holiday with a locally grown Christmas tree. And whatever your faith (or lack thereof), on behalf of everyone at Cornell Cooperative Extension, may your holiday be filled with joy, love, laughter, contentment, peace and goodwill.