Get into winter — on snowshoes 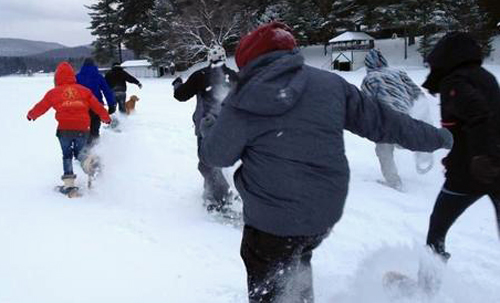 I’ve heard it said, “If you can walk, you can snowshoe.” It’s fun, easy to learn, inexpensive when compared to most other winter sports, and poses little risk of injury. It’s a great group activity, too, one that can open up a whole new world of winter recreation for your entire family.

Snowshoes distribute your weight evenly over a larger area than regular snow boots, effectively providing flotation, which allows the wearer to hike, climb, even run across snow-covered ground without slogging or sinking. Generally, the heavier the person, or the lighter and drier the snow, the more snowshoe surface area is required. For balance and stability, many snowshoers use ski poles or summer trekking poles outfitted with larger baskets in order to prevent the poles from penetrating too far below the snow surface.

If you’re looking for a stimulating, full-body cardiovascular or aerobic workout, snowshoeing may be just what the doctor ordered. The same can be said for those who, like me, simply enjoy rambling through the woods, along backcountry roads or wilderness trails at a comfortable pace, experiencing the natural beauty of the outdoors without distractions — maybe coming across animal tracks, seeing deer, a flock of turkeys, some curious and very brave chickadees, or finding scores of snow fleas bouncing around at the base of a big old hemlock.

You won’t need a lift ticket or specialized clothing. And since most snowshoe bindings are built to accept a wide variety of shoe and boot styles, you won’t need specialized footwear, either. In fact, with few exceptions, it doesn’t much matter what you wear as long as you dress to stay dry, warm and comfortable. 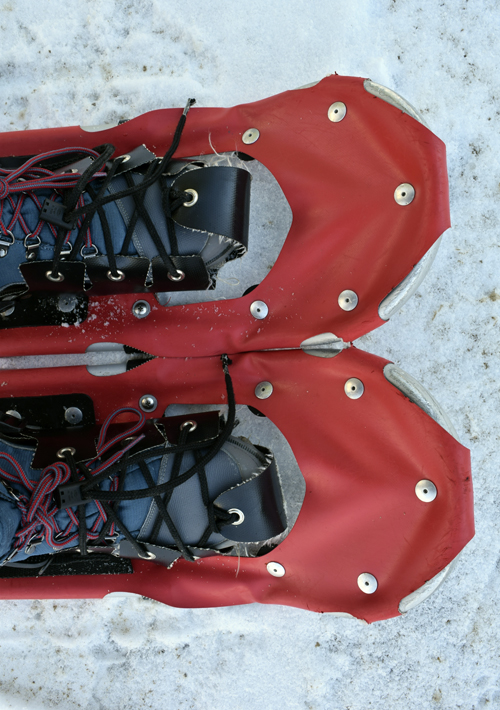 Consider wearing a moisture-wicking under- or base layer, a windproof middle layer, and a jacket and pants that are both windproof and water-resistant. Your socks and boots should be waterproof, too.

And you might consider investing in a pair of gaiters, which prevent snow from getting into the top of your boots, especially in deep powder conditions. Bear in mind that loose-fitting boots with removable liners can become problematic. After a while, the liners may start to pack down, pulling at your socks and leaving your feet cold.

Available evidence suggests that slabs of wood bound to the wearers’ feet (combination snowshoe-skis, perhaps?) were used by nomadic tribes of central Asia roughly 6,000 years ago, enabling explorers to journey west to what is currently northern Europe and east across the then-frozen sea ice of the Bering Strait to North America. Some anthropologists believe these central Asian wanderers are among the ancient ancestors of the Inuit and perhaps other Native American tribes. Many believe that the importance of their invention is on par with that of the wheel.

Native Americans inhabiting the temperate-forested areas of North America — among them the Athapascans in the west and, closer to home, the Algonquin tribes of the Ottawa and St. Lawrence River valleys — were the originators of perhaps hundreds of traditional and non-traditional snowshoe designs, including the bear paw and beaver tail models.

The French colonialists who settled along the St. Lawrence River in the 1600s, and who were quick to learn from the native people, were the first of the European settlers to use snowshoes extensively. The Dutch and the British were, evidently, far more resistant to learning from the natives. As a result, the British struggled for domination during the early years of the Seven Years’ War, or French and Indian War, as the French, alongside their native allies, raided English settlements on snowshoes, which provided an important tactical advantage.

The tide changed, however, with the Jan. 21, 1757, skirmish on Lake Champlain known as the Battle on Snowshoes, in which the French found themselves struggling in snow up to their knees, fighting against British troops wearing snowshoes. From that day forward, the English colonialist militias deemed snowshoes basic equipment for northern troops. Many considered them as important as the flintlock rifle in areas of deep snow.

If you plan to snowshoe the incredibly beautiful backcountry of the Adirondacks and northern New York, keep in mind that these environments can also be frighteningly unforgiving, especially when you’re not properly prepared. Whether you’re a beginner or an old hand, things can go wrong. Stay on top of changing weather, and ice and snow conditions. And learn to recognize the value of, and become familiar with, fundamental winter survival skills (e.g. starting a fire, building an emergency shelter). Carry a map, a compass, extra food, extra clothing, a pocketknife (and/or an axe), a first-aid kit, a flashlight, and matches or a lighter, along with paper, birch bark or some other fire-starting material in a sealed, waterproof plastic bag or container. Stay safe!