This monster pumpkin is being lifted to the scale with a harness. (Provided photo — Miramar Events, with permission) 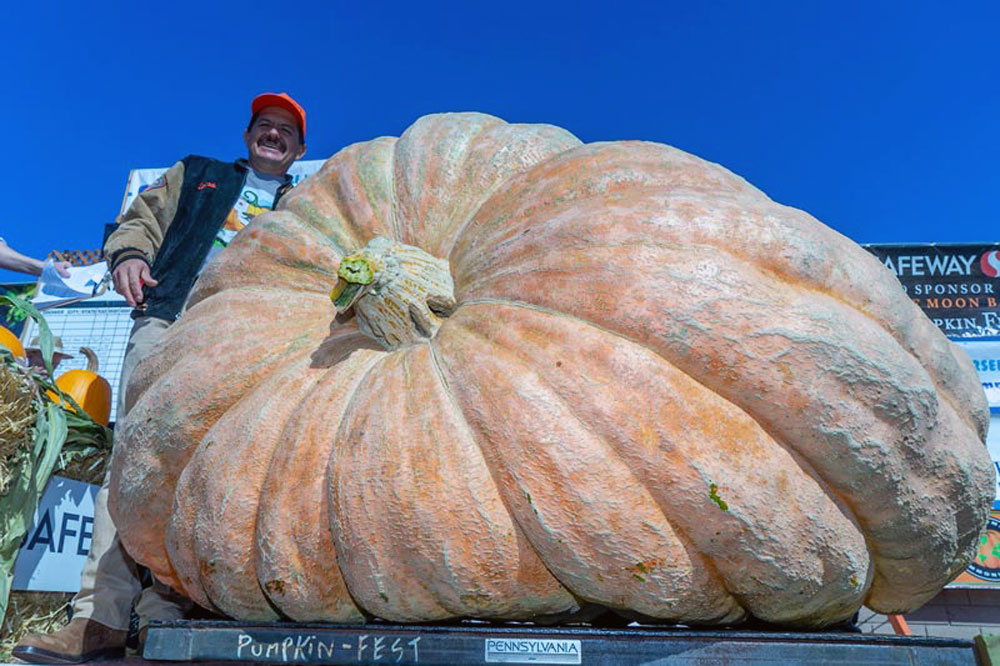 Growing giant pumpkins may be a lot like baseball. After all, both are traditional, competitive sports that require hard work, determination, discipline, attentiveness, patience, and the ability to anticipate. Both continue to grow in appreciation; not just in this country, but internationally. The season starts in the spring. And fall is the time of final defeat for most, victory for a lucky few.

During the final weeks of September and throughout the month of October, millions of people around the world take in fall festivals featuring giant pumpkin weigh-offs. Many also showcase pumpkin parades, pumpkin carving contests, pumpkin sculpture, pumpkin pie-eating contests, and pumpkin beer, as well.

Take, for example, the Prince Edward County Pumpkinfest, held annually in Wellington, Ontario, Canada, where last year’s first-place winner was Harley Sproule of Ormstown, Quebec. (Just up the road from me.) His elephantine entry weighed in at an awe-inspiring 1761.5 pounds. The County Pumpkinfest record is held by Jim and Kelsey Bryson, also of Ormstown, whose 2011 entry, a particularly prodigious 1818.5-pound winner; also set the world record, at the time. (At the time of this writing, 2019 results are not yet in.)

Here in the States, Half Moon Bay, California, hosts the Annual Safeway World Championship Pumpkin Weigh-Off, which celebrated its 46th year earlier this month. At the event, Cindy Tobeck of Olympia, Washington stood proudly with her entry: an eye-bugging behemoth that weighed-in at an immensely impressive 1,736-pounds. And Napa, California’s John Hawkley, presented an equally enormous entry, which weighed in at 1,727-pounds. 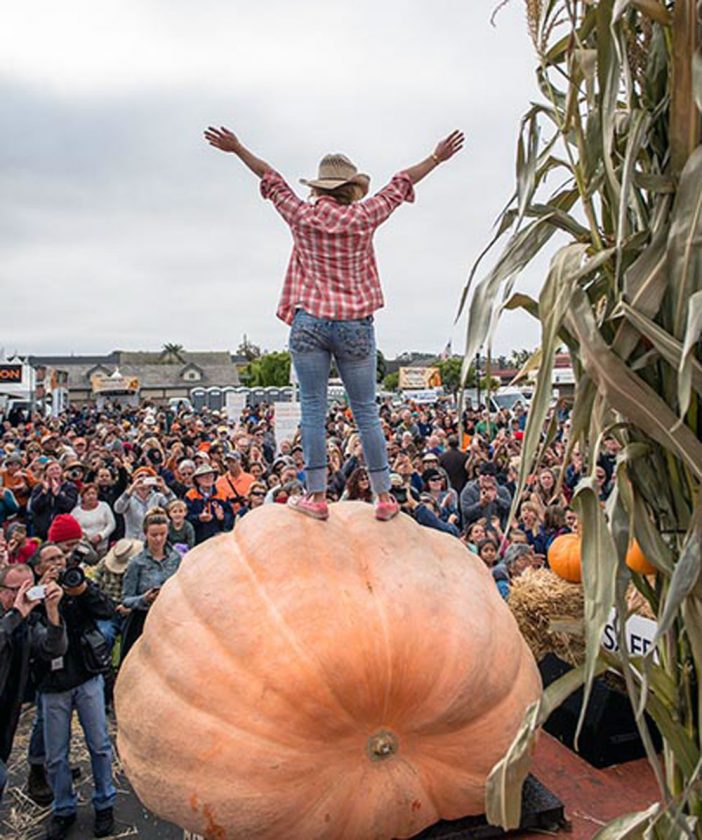 Believe it or not, their gigantic gourds proved to be small potatoes (or should I say pumpkins), taking only third and fourth place in the contest. Reuben Frias, also from Napa, California, brandished a jaw-dropping giant, which weighed-in at 2,017-pounds, more than a ton. But, at 2,175-pounds, the wondrous, winning weigh-in, grown by yet another Napa, California enthusiast, Leonardo Urena, outweighed Frias’ positively protuberant pumpkin by almost 160 pounds, breaking the California record. (A pumpkin from Washington State, weighing nearly 2,400 pounds, won in 2017.) The 51-year-old Urena took home $15,225 in prize-money. (First prize is $7-per-pound, with an additional $30,000 in prize money offered for a world-record-breaking entry.) For second, third, and fourth places, Frias, Topeck, and Hawkley took home $3000, $2500, and $2000 respectively. A separate $1,000 prize was awarded to Eric Carlson of Portola Valley, California, for the Most Beautiful Pumpkin, as judged by audience members, based on color, shape, and size.

Closer to home, the Topsfield (Massachusetts) Fair All New England Giant Pumpkin Weigh-Off announced its winner on Oct. 8. And what a wonderfully weighty winner it was. Alex Noel, of Pomfret, Connecticut, literally squashed the competition with a 2,294.5-pound Godzilla-gourd; the heaviest pumpkin in Topsfield Fair history; and took home the first-place prize of more than $8,000.

Mr. Noel entered another of his pumpkins into the Frerichs Farm Pumpkin Weigh-Off, in Warren, Rhode Island, on Oct. 13. That one weighed in at a hefty 2,058 pounds. It took second place. Russ Klowan, of Cumberland Rhode Island eked out a narrow victory over Mr. Noel, with a burly orange behemoth that weighed in at 2,074 pounds. Wood Lancaster of Massachusetts came in third with his ginormous giant, which weighed 2,016 pounds. 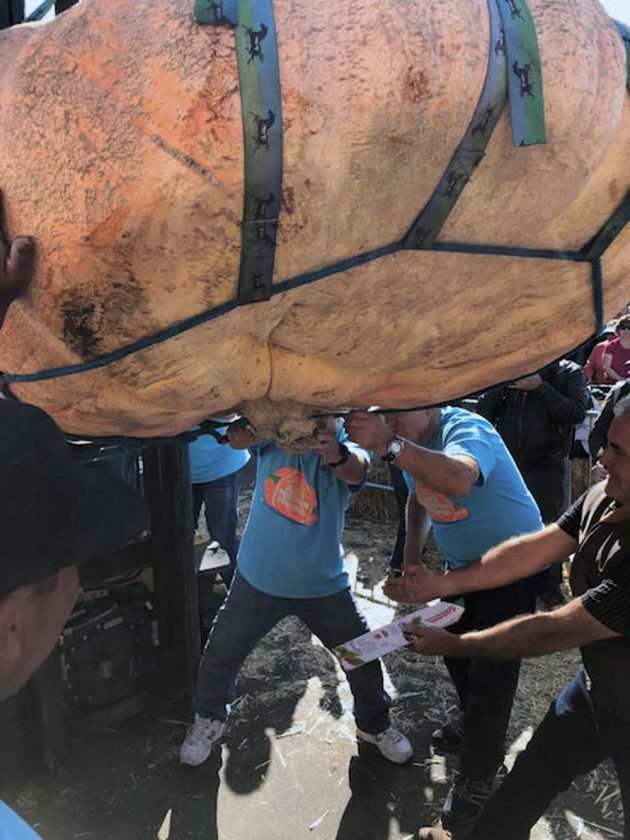 This monster pumpkin is being lifted to the scale with a harness. (Provided photo — Miramar Events, with permission)

Amazingly, all of these wonderfully weighty winners, even massive monsters and bulky behemoths as gargantuan as Karl Haist’s and Leonardo Urena’s home-grown goliaths, fall way-short of the reigning World Record holder; the greatest, most grandiose gourd ever grown, the heavyweight champion of the world; a 2624.6 pound (1190.49 kilogram) super-squash (Oh, my gourd!), grown by Belgian gardener Mathias Willemijns, and weighed at the 2016 European Championship Pumpkin Weigh-off in Ludwigsburg, Germany.

To the best of my knowledge, New York has had two world record-holders; both from the North Country. Donald Black of Winthrop (St. Lawrence County) took top honors in 1993 and Paula and Nathan Zehr of Lowville (Lewis County) were world champions in 1996.