Professor Susan Brown picks apples in a Cornell AgriTech orchard. Brown is the Cornell University Herman M. Cohn Professor of Agriculture and Life Science, and was recently named a fellow of the American Society for Horticultural Science. Provided photo — CALS) 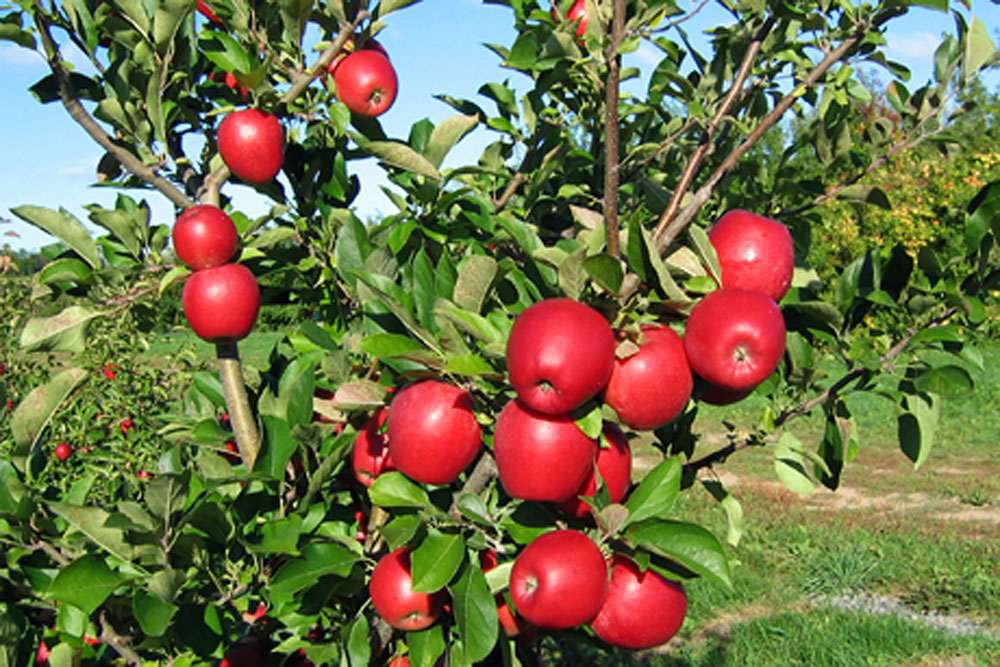 There’s little in life more pleasing than biting into a crisp, juicy, slightly sweet, slightly tart, fresh-off-the-tree apple. And what could be healthier? Apples contain vitamins A and C, antioxidants, potassium, pectin, fiber and no cholesterol. They can be eaten fresh, baked or stewed; turned into juice or cider; made into sauce, butter, jelly, vinegar, wine and delightful confections when coated with candy (sugar syrup), caramel, or toffee and nuts; or cooked into pies, crisps, crumbles, cakes, doughnuts, even meat dishes.

New York’s apple harvest is underway. And it’s shaping up to be a good one. Early season varieties are now available at area orchards, farm stands, “pick your own” locations and farmers markets.

In cooperation with Cornell Cooperative Extension, Professor Brown provides information on developments in commercial production and related issues, such as intellectual property rights, to growers across the state. Under her guidance, trees of advanced selections have been established in several New York orchards, to test their adaptability and potential. Trials are sometimes established in other regions of the country, and internationally as well.

In a recent interview with Cornell Media Relations Specialist Lindsey Hadlock, Professor Brown was quoted as saying, “2019 should be an excellent year for apple quality. While we had a very wet early season, which made control of early diseases difficult, that was followed by sun and heat.” She went on to say, “These recent cold nights are perfect for enhancing both color and quality.” And “Due to all of the early rainfall, apple size should be bigger this year.” She noted, however, that, “Some varieties are ripening a week or two later than usual.” 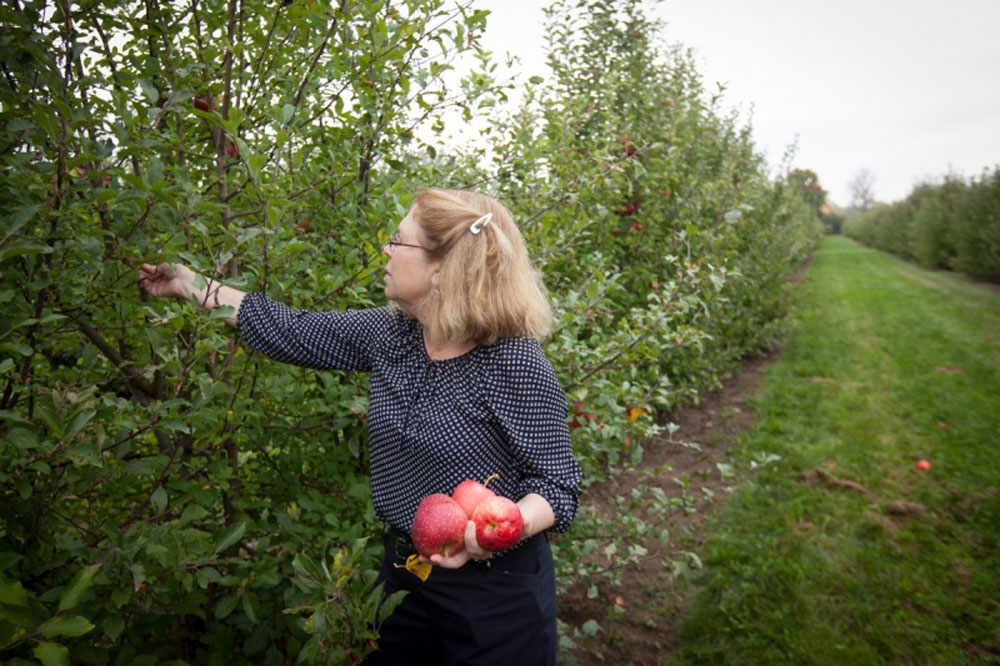 Professor Susan Brown picks apples in a Cornell AgriTech orchard. Brown is the Cornell University Herman M. Cohn Professor of Agriculture and Life Science, and was recently named a fellow of the American Society for Horticultural Science. Provided photo — CALS)

We’re the nation’s second-largest apple-producing state. With more than 10 million trees, our roughly 600 commercial apple growers produce, on average, 30 million bushels of apples annually. And they grow more varieties than producers in any other state. Among them: McIntosh (the national apple of Canada), Empire, Cortland, Rome, Gala and many others. New York-grown apples are shipped raw, squeezed into juice and cider, frozen, canned as applesauce, slices, and pie filling, and processed into vinegar, jelly, apple butter, mincemeat and dried-snack products.

In 1976, New York’s policymakers designated the apple as the official state fruit. In 1987, they approved the apple muffin as a state symbol.

None of the varieties of eating and cooking apples produced and marketed today are cultivated from seed. The fact is, apple trees grown from seed bear little similarity to their parent trees. In other words, the seed from a McIntosh apple will produce an apple tree, but it won’t be a McIntosh apple tree.

All orchard apple trees are clones. The technique of grafting is used to join a length of vegetative branch-wood (scion) from the tree the grower wants to propagate to a rootstock adapted to the soil and/or climate where the tree will be planted.

Grafting dates back thousands of years. The earliest veriﬁable written account of grafting is from the Hippocratic treatise, “On the Nature of the Child,” thought to have been written in about 424 BCE, by one or more of the followers of Hippocrates. (Source: “A History of Grafting,” Ken Mudge, Department of Horticulture, Cornell University, et al, 2009)

During the Roman era, a number of authors wrote about grafting as a common agricultural practice. The ancient poet Virgil (Publius Verglius Maro; 70-19 BCE), in one of his greatest works, the “Georgics” (Greek for agriculture or farming), which is more than 2,000 lines long and divided into four books, wrote:

“For where the tender rinds of trees disclose

Their shooting germs, a swelling knot there grows

Just in that space a narrow slit we make

Then other buds from bearing tress we take

In whose moist womb the admitted infant grows”

Apples have been associated with temptation (the Garden of Eden), love (In Greek mythology, Gaia, or Mother Earth, presented a tree with golden apples to Zeus and his bride Hera, on their wedding day), health (“An apple a day keeps the doctor away”), praise (the apple of my eye), the nation (as American as apple pie), nature (Sir Isaac Newton discovered the laws of gravity and motion when watching an apple fall to the ground), promise (they are eaten at the Jewish New Year, Rosh Hashanah, as a symbol of the sweetness and freshness of the coming year) and legend (Johnny Appleseed).

Jonathan Chapman, the American frontiersman behind the Johnny Appleseed legend, was a rugged, fearless individualist and a man of vision. But that’s another story.