Are there cougars in the Adirondacks? 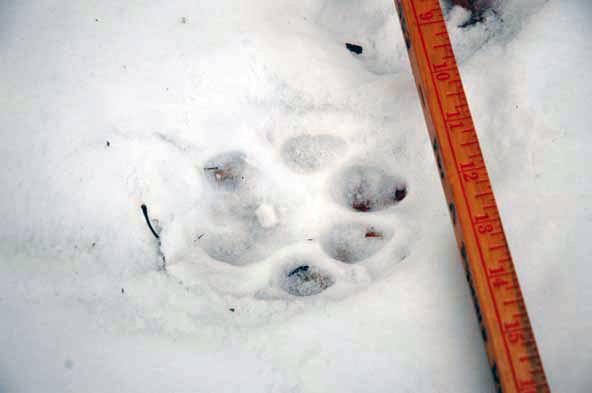 The paw print of a mountain lion is seen in Lake George on Dec. 10, 2010. (Photo provided — New York State Department of Environmental Conservation)

Before the 19th century, cougars were abundant across the American continent. In fact, the cougar was the most widely distributed land mammal in the Western Hemisphere. They were found in forests from tropical to boreal, from Chile to the Canadian Yukon.

A lion living in the Arizona desert may appear to be different than one living in the coniferous forests of British Columbia or the freshwater marshes of Florida, but genetically, they’re the same animal, Puma concolor. Taxonomists classify cougars from different regions by subspecies, however. Examples are the North American cougar, Eastern cougar, Western mountain lion and Florida panther. They’re also called pumas and catamounts.

All western states, except Texas, have at least some protections for cougars and western populations appear secure. There are even limited legal harvests allowed in states where local populations are not threatened and lions are considered big game. The Florida panther, however, remains one of the world’s most endangered mammals. And on Jan. 22, 2018, the Eastern cougar subspecies was removed from the endangered species list by the U.S. Fish and Wildlife Service and officially declared extinct.

So I was quite surprised to hear that on June 6, the Saratoga County town of Halfmoon had posted a warning on Facebook, stating that the town had “received information from residents that there have been sightings of a mountain lion in the vicinity of Coons Crossing, the northern part of Halfmoon,” adding, “Please be aware for the safety of your families and pets.”

New York state’s Department of Environmental Conservation receives reports of sightings every year. Among them are these:

¯ On March 20, 2016, a trail cam video from Crown Point showed what several people believed was a cougar and was widely circulated on the internet. DEC searched the area for physical evidence (e.g. scat, fur, tracks) but found none. Upon further investigation, the agency determined that the cat in the video was most likely a housecat, which the angle of the camera caused to appear to be much larger than it actually was. You can decide for yourself. The Adirondack Almanack has archived an article written about the sighting by Phil Brown, editor of the Adirondack Explorer from 1999 to 2018. The video footage accompanies the article. It can be seen at adirondackalmanack.com/2016/03/cougar-crown-point-judge.html.

¯ In the fall of both 2013 and 2014, local police and DEC received reports of a cougar in Washington County. But after examining tracks left by the animal, DEC refuted the 2013 claim, declaring that the tracks were from a bobcat, a native cat much smaller than a mountain lion. To the best of my knowledge, the 2014 reports have neither been confirmed nor denied.

¯ In October 2013, a trail cam photo taken near Newcomb of a large animal seeming to be a cougar was posted on the internet at poststar.com. After scrutinizing the photo, Ed Reed, a DEC senior wildlife biologist, said the cat in the picture appeared to be spotted and that he believed it was a bobcat. That photo can be seen at https://poststar.com/blogs/adirondack_outdoors/mountain-lion-in-newcomb/article_40618886-2fa9-11e3-b31a-0019bb2963f4.html.

By the way, on Oct. 25, 1993, Reed identified a partially eaten deer found in Keene Valley as killed by a cougar, emphasizing, “The lack of claw marks on the back and shoulders could mean that the cat is a declawed animal that escaped or was released from captivity.”

(Note: A cougar kitten was shot and killed in Saratoga County in 1993. It was determined that it had been an exotic pet of South American origin.)

¯ In August 2011, DEC confirmed that they’d found solid evidence of a cougar, including hair and a bedding area, just north of the village of Lake George near Truesdale Hill Road. The sighting took place on Dec. 10, 2010. Federal wildlife officials used DNA to confirm that the young male lion had traveled from the Black Hills of South Dakota and had been seen trekking through Minnesota, Wisconsin and Michigan, adding that the cat was the same one that had been hit and killed by an SUV approximately 70 miles from New York City, on June 11, in the town of Milford, Connecticut. Prior to its death, there had been several reports of a large, wild cat in and around Greenwich, Connecticut, including sightings on the campus of the Brunswick School, an independent college prep day school in northwest Greenwich.

So, are there cougars in New York … or not? Well, according to DEC, eastern cougars have been absent from the state since the late 1800s and isolated sightings are most often cases of mistaken identity (e.g. bobcats, fishers, coyotes, domestic housecats, dogs). Confirmed sightings are of mountain lions that were either once exotic pets or that are male Western mountain lions not native to the state. There have been no confirmed reports of female Western mountain lions in the Northeast for more than a century.

DEC staff will investigate reports only when physical evidence exists or when a captive animal has escaped. Reports of cougar sightings can also be submitted to Protect the Adirondacks, by visiting www.protectadks.org and clicking on the “Report a cougar sighting” link.