It’s getting a little squirrelly around here 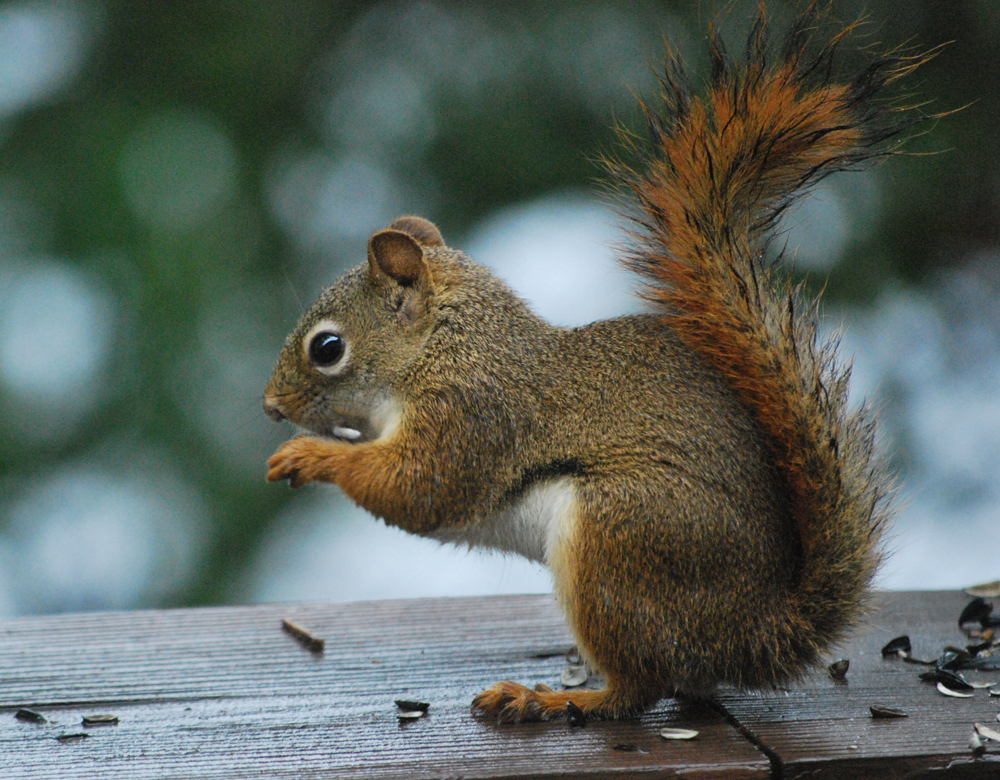 Red squirrels are a common sight throughout the Adirondacks. (Enterprise photo — Morgan Ryan)

With the opening day of the annual big game hunting season set to arrive on Oct. 20, outdoor travelers should take the usual precautions, and be aware that hunters will be in the woods. Although most hunters tend to avoid the popular hiking trails, they will at times, use the marked hiking trails.

In addition to hunting whitetail deer, hunters will also be pursuing a variety of seasonal offerings which include rabbits, varying hare, wild turkey, coyote and possibly the wiliest prey of them all: red, gray and black squirrels.

The majority of local hunters likely cut their hunting, dead-eye teeth chasing after squirrels. The chattering prey continue to provide young hunters with a true challenge, and an opportunity to make some pocket change as well.

When properly prepared, squirrel can provide a respectable, though meager, meal.

Similar to many young hunters, l chased squirrels with a B.B. rifle until l got my hands on a more powerful pellet rifle. Eventually, l got my hands on a bolt action .22 caliber rifle, and the local squirrel community took notice. While they probably were not really afraid of me, they certainly learned to disappear whenever l walked out the back door of my house with a rifle in my hands, at least in my mind.

Many accomplished whitetail hunters continue to spend a few days of the preseason hunting for squirrel in an effort to tune their eye and get into a hunting mode. Along with raven and chickadees, squirrel are likely to be the most common town criers of the woods.

As a youngster, l never attempted to cash in on all of the money that could potentially be earned selling squirrel tails to the local taxidermist or directly to the Mepps Lure Company. However, as l recall we had a grand plan to outfit a handful of local squirrel snipers, before the plan folded due to an ammo budget that far exceeded our sales of squirrel tails.

Although l actually enjoyed poking the fire and cooking up a half dozen hind quarters of squirrel, we always had to add a couple dozen frog legs to make an actual meal.

The majority of our adventures were conducted at a distance far removed from adult supervision. No one was seriously injured … except for the time my friend Bob dropped his trousers to go to the bathroom and fell on top of a bumble bee nest. Who knew bees nested on the ground? It was hard lesson learned, and one that has been long remembered.

My inspiration in writing this week’s column came via a press release l recently received from the Mepps LureCompany. The notice explains the company is currently purchasing primarily red, grey and black squirrel tails at a price of 25 cents per tail. For further information, please contact JSwartz @wwwmepps.com.

Suppliers will receive a substantial discount if payment is credited toward sales of lures.

If properly prepared, squirrel are excellent table fare. But if you have ever attempted to exterminate them from an attic, you will understand their elusiveness.

Although black (melanistic) squirrels are rare, they appear to be thriving in many parts of the Park, especially in the Saranac Lake region. They appear to be a bit larger than the red or gray variety, and far more aggressive.

An old friend of mine has live trapped the black squirrels for years and has released them the state boat launch to the Saranacs, where they can now be found on the living peacefully on the islands.