Back to basics as the mercury rises 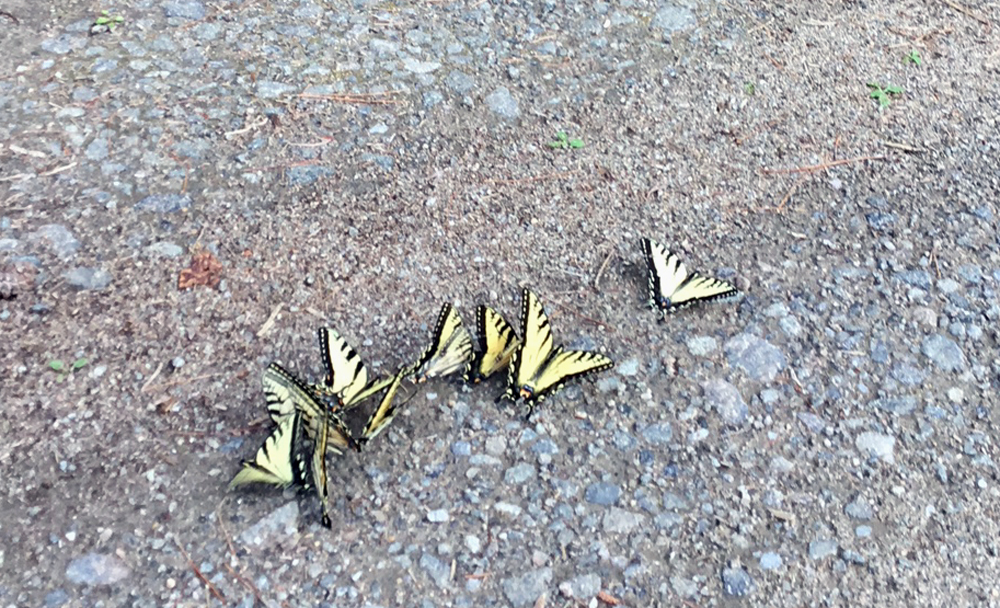 Yellow swallowtail butterflies can be seen “puddling” along streams and fields as the prepare for their annual migration. (Provided photo — Joe Hackett)

With the heat of the summer season already bearing down on the region, it is time for bass anglers to go back to the basics. This means tossing crayfish or shiners for the kids or skiddering topwater plugs such as hula poppers, chuggers or similar offerings that are intended to provoke a strike response from fish that are largely “off the feed” on hot, sunny summer days.

In such conditions, it is important to fish early and late in the day, and target areas where fish are likely to feed and seek shelter — around docks, inlets and outlets, which almost always provide such essential elements.

While bass anglers on the lakes and ponds will be limited to prime periods early and late in the day, bass on the rivers and streams are almost always on the take. Flowing currents, especially around rapids and waterfalls, provide oxygen-rich waters and an endless smorgasbord of crayfish, leeches, nymphs, frogs, pollywogs and an occasional mouse or a baby bird that was washed into the flow.

Although trout can still be found feeding when water temperatures are in the 70s, they can be severely stressed from even a short fight. In such conditions, ethical anglers know enough to put up the rods and reels or focus on such fish as bass or pike that can better tolerate the warmer water.

There are many such waters to be found, especially in the lower reaches of the Saranac, the Ausable, the Boquet, the Bog River, the Black and more. It is a game that has played out over the generations, and thankfully, the wild waters of the Adirondacks are likely to provide the necessary ingredients for future generation to come.

Bass on the move

Although bass fishing has become a major industry, with multimillion dollar tournaments for high school and college varsity teams, as well as promotions and television programs streamed live on Bass TV, it is important to remember the heart of the fight must always be an effort between an angler and his fish.

It is easy to lose track of such manners, amid the fast pace of competitive tournament angling, which has become a major industry in its own right.

l enjoy fishing for bass at any time and under almost any conditions. It is the still, hot, sultry flat waters of the larger Adirondack lakes that l prefer most. And when it comes to tackle for tackling the bronze bomber, small mouths of the Saranacs, there is no better tool than an old fiberglass flyrod.

While rods such as Lighting Strikes, Ugly Sticks and new lightweight, graphite contraptions appear to pop up ever year, there is nothing to compare with the flex and fight that is available on an old glass rod. Typically, l use them to toss a cork or deer hair popper, but l also like to use a flyrod to still-fish with minnows on the shoals or while drifting the river.

Admittedly, it is not as sporting as taking them on a deer hair fly, but it is just as much fun. It is also much more effective, since bass are more likely to take under water, where conditions, casting, presentation and retrieving are most important.

Given a choice, l would prefer to spend my time fishing for brook trout, high on a mountain pond, far removed from the din of civilization.

On occasion, l have been known to pluck a few wildflowers. I know that l shouldn’t, as it goes against all manner of conservation and protection of wild fauna and flora.

It is a bad habit that l picked up from my mother, and for some odd reason it always brings me mixed sentiments. It reminds me of the times she would take all five of us on a hike, which was always sure to include lessons on rocks, flowers, trees and bees. I suppose it is also the reason l always feel like a little kid in the spring woods, when trout lilies and Lady Slippers are in bloom.

I recently learned a lesson about the dangers of picking wild flowers, and fortunately, l was spared the results. The near incident was a non-incident through no fault of my own.

I was fishing along the banks of a local stream, and as l was getting ready to head home, l spotted a beautiful crown of white flowers, atop a tall stalky plant on the far bank. It was unusual because nine times out of 10, l would would have plucked a handful of the blooming flowers and wrapped them in ferns or a birch scroll to put on the table at home.

But, for some odd reason my instincts must have overcome my lack of good sense. As a result, we had no bouquet of fresh flowers on the table, and fortunately we did not have to suffer through a long rehabilitation process while recovering from the burns, blisters, rashes, fever and similar symptoms that come to anyone who comes in contact with these beautiful flowering plants.

If you see them, stay clear and warn others. Paddlers and anglers should take note, as riverbanks, marsh lands, bogs and swamps are their prime habitat. They are related to Giant Hogweed, as well. They will fit right in with other such threats as wild parsnip, stinging nettles, poison ivy and poison sumac.