Winter hangs on for another weekend 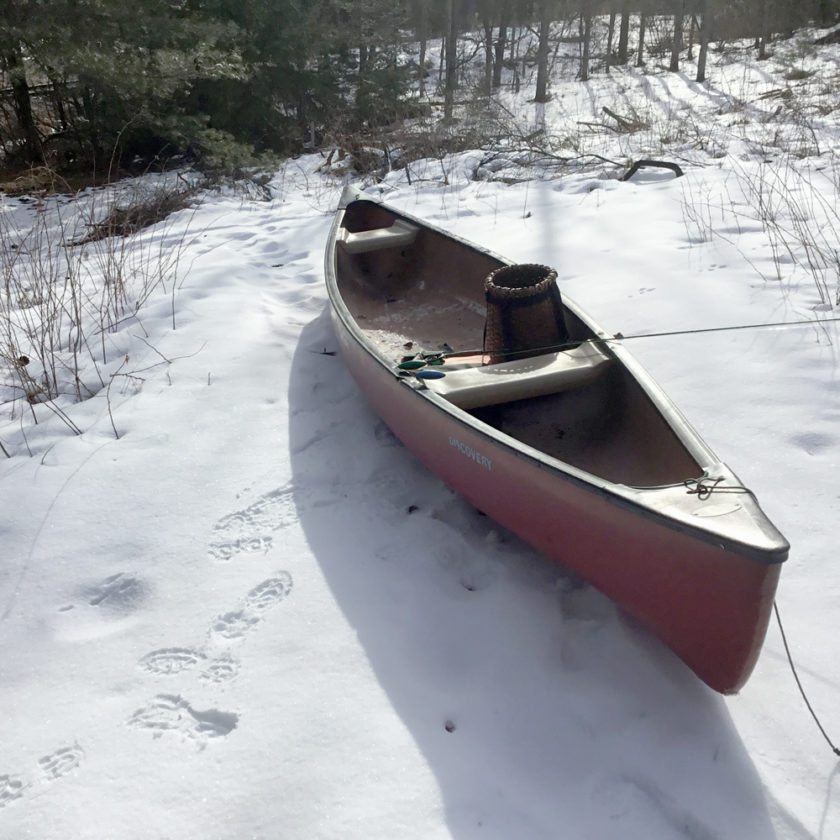 Anglers anxious to get out on the water were greeted with a significant snowstorm last weekend. (Provided photo — Joe Hackett)

The extent of the damage will soon become evident as anglers take to the woods following ice-out, which appears to be on target for the usual Mother’s Day weekend opener.

As always, anglers and paddlers must wear a PFD and be vigilant of gusty winds and floating ice. Similar cautions should be shared and can damage a prop, poke a hole in a hull or take out your lower unit, depending on your speed.

For those who don’t care to fish, paddle, bike, hike or otherwise enjoy the spring woods, there are still plenty of options. Unlike the autumn woods, which tend to be crusty, crumbly and ripe with the scent of decay, the spring woods are fresh and alive with the rebirth of the earth as we know it.

From the valley to the mountaintop, these natural transitions can be observed in the blooming wildflowers and mixed with the daily return of birds, salamanders, frogs, fish, turtles and all sorts of creatures, large and small.

The season of renewal also has a unique affect on our species, which is more evident outdoors than in any other setting.

In addition to the natural transitions, there is an entire suite of outdoor pleasures that will begin to unfold as fishing poles replace ski poles and rafts of paddlers mingle with rafts of migratory birds.

While the such natural transitions will continue to take their usual course, the game will remain the same. The spring wild turkey season kicked off on May 1. Turkeys will likely be in the woods and the open fields primarily during the early morning hours, and so will the hunters.

Hiking, birding, biking and the whitewater seasons are already underway on the Hudson, Black and a number of other whitewater hot spots across the region. Similarly, the open season for brook trout, salmon, pike, bass, walleye, etc. will follow in order over the coming months.

Of obvious concern is the current condition of ice cover on the lakes, and water levels on the rivers and streams. As usual, the thaw will drive water levels up in the flowing rivers and streams as ice-out occurs on the lakes and ponds. It may be a week or more delayed, depending upon the temperature, rain and wind. The first blood donation to a black fly will seal the deal, at which time spring will have finally sprung.

A recent economic report indicates tourism in the Adirondacks is a $1.3 billion industry. With over 12 million travelers flocking to the region annually, the impact is evident — both financially and aesthetically.

While the economic impact has certainly been considerable, so have the social and cultural advances. Due to a variety of factors, primarily the worldwide web, Adirondack residents are no longer alone. Potential visitors can now explore the Park from the comfort of their own home. They can take a virtual rafting trip, witness current weather conditions or watch ice melt — all of which are streamed live from Long Lake, Whiteface Mountain and other similar websites.

Arguably, the Adirondack region encompasses one of the last less-traveled patches of wild country in the country. And amazingly, in this age of bitcoins, credit cards and money to go, wherever you go in the vast, multi-million acre state, there are no tolls, entrance fees or impossibly long lines. It should come as no surprise that the multi-billion dollar economic impact is considerable.

Frankly, l expected it to be greater.

However, after crossing over the virtual Blue Line, which is located somewhere north of Glens Falls, many Adirondack visitors never have a reason to reach for their wallet again. In contrast, fees at our National Parks currently range from $7 to $77, per person, depending on the season.

In comparison, the Adirondacks are a true bargain, and they just keep getting better, due to the inclusion of additional tracts of wild land that have been closed to the public for decades. l say, let it grow for our children and generations beyond. It is a deal we can’t afford to refuse.