Find the right balance when fishing with kids 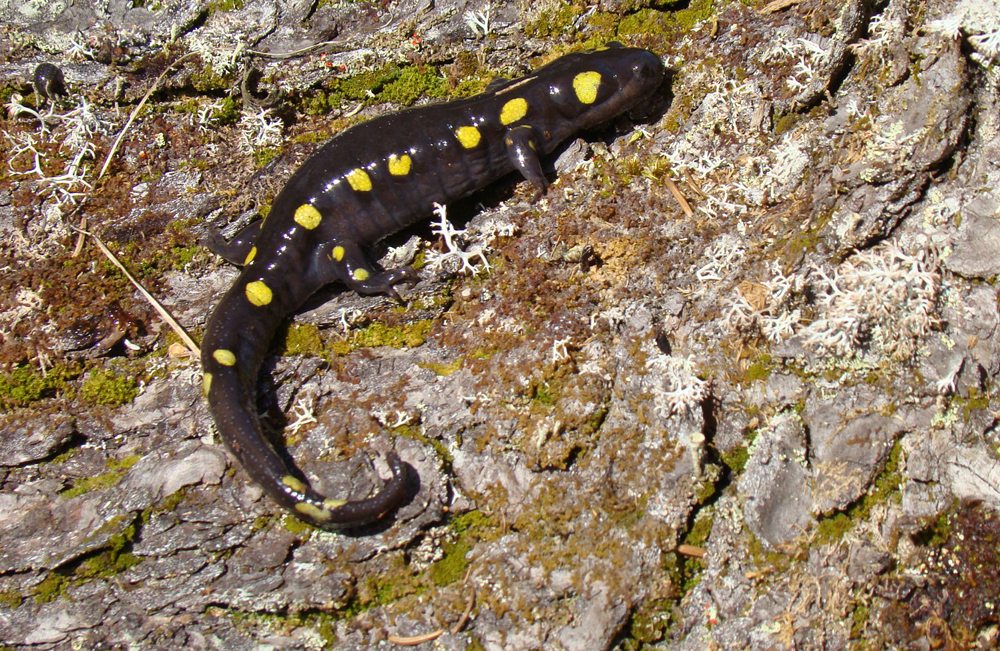 Spotted salamanders like this one are an early-season delicacy for brook trout. They will appear following the first heavy rains of the new season. (Provided photo — Joe Hackett)

If there is one single piece of advice l would offer to parents who want to introduce their kids to fishing, it would be to leave their own rods at home, at least for the first few outings. The experience should be all about the child, and their natural surroundings.

Trust me, they will have numerous opportunities to engage in competitive activities throughout their career. Save competitions for the ball field, the rink or the basketball court rather than worrying about bagging the biggest buck or catching the largest fish.

Regardless of your own special talents, secret techniques and tenacity, we all remain equal before the fish.

It is far too easy to deflate a kid’s ego by making their first experience all about who caught the biggest fish or the most fish of the day. It is important to remember that fishing has traditionally been a contest between a fish and an angler, rather than a competition between anglers.

However, over the years angling has morphed into a major league competitive event with corporate sponsorship and prize money that totals in the millions. Despite the ever-growing interest in competitive angling (which now includes high school and college bass fishing teams), it is important for anglers to remember that it is an activity that is inherently consumptive by nature.

While the practice of catch-and-release angling and the designation of no-kill, barbless hooks only are certainly legitimate conservation practices, it is important to note that angling is intended to be a blood sport.

If the purpose of a fishing outing is based solely on catching as many fish as possible within an allotted time, can it still be considered a legitimate sporting endeavor? Would it be any different if a sportsman or woman was to engage in a no-kill hunt with a paintball gun where the quarry was a whitetail deer, fox or a woodchuck?

In either case, there is admittedly the thrill of the chase.

However, for practitioners of such traditional pursuits, the thrill of the stalk, and the eventual take are all part of the eventual consumption of a harvest. In this current era of no kill waters, barbless hooks, thermal plastic landing nets and no contact release angling, it is important to introduce newcomers to the options and allow them to decide the approach that suits them best.

Although l am primarily a practitioner of catch and release angling, l have no problem releasing a few fresh brookies, or a plump salmon on the grill after another long day on the water.

Although the new trout and salmon season is already underway, there is still a thick layer of ice capping off most of the local lakes and ponds.

Currently, the most productive opportunities will be found in and around the inlets, outlets and tributaries where bait fish such as smelt, suckers, dace and a host of similar prey can be found. As usual, the prevailing winds and maximum sun exposure will occur along the eastern shores where downed timber and prevailing winds will combine to deliver the first hatches of the new season.

In addition to leeches and spotted salamanders that typically provide the first forage base, there will also be a variety of insect larvae hatching out over the next few weeks.

Fish slow and deep, and target areas in and around inlets and outlets. If you see birds, such as kingfishers, gulls, heron or similar scavengers gathered along the shoreline, it’s a safe bet there are trout or salmon on the prowl.

With warmer weather on the horizon, it’s nearly time to swap the ski poles for fishing poles. If you must get out, carry ice spikes, a throw rope and wear a PFD. Be sure to let somebody know where you’re going and when you’ll be back. Safe travels and good fishing.