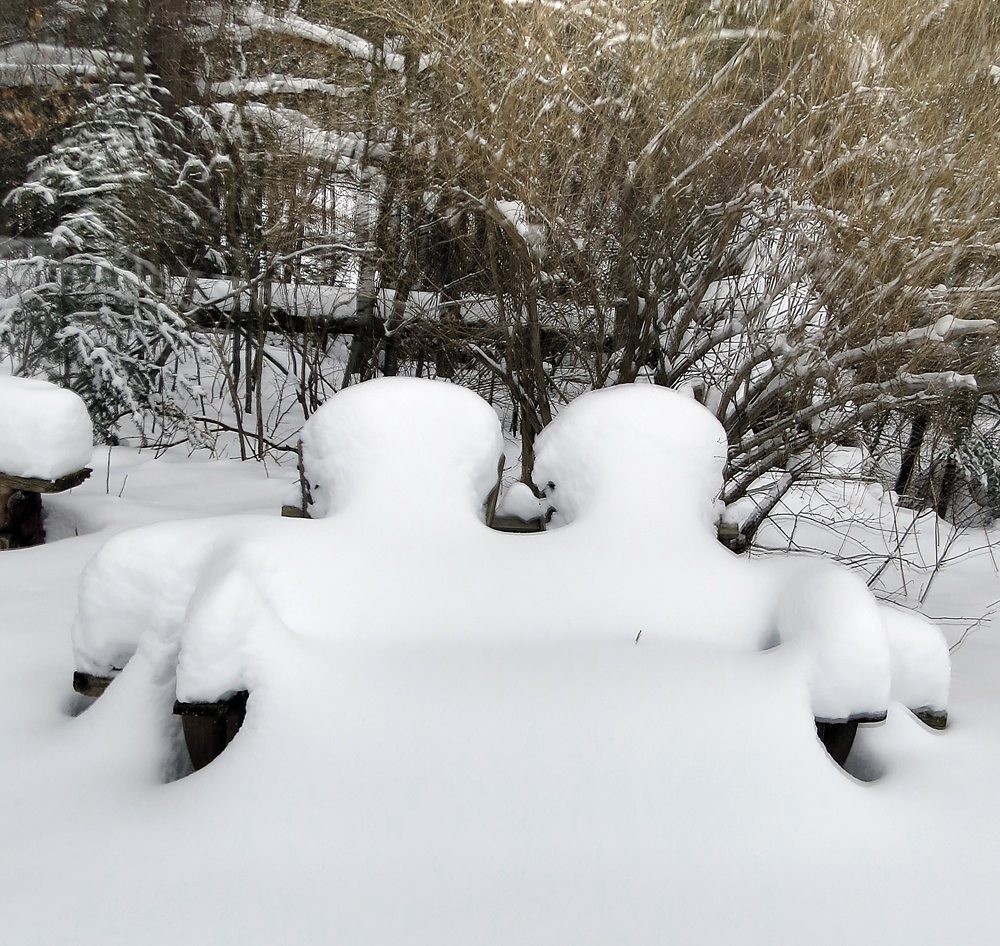 Last week’s heavy snowfall has remained as the calendar turned to the official start of the spring season. (Provided photo — Joe Hackett)

It appears winter is getting ready to throw in the towel following one last cold snap. While the lakes and ponds retain their winter hard cover, it appears fair weather is on the way.

All the signs are in the air, with the spring migration of birds of all sorts, high water on the rivers and the usual combination of muddy roads and frost heaves everywhere.

Opening day of trout season — April 1, aka April Fools’ Day — may actually provide open waters, possibly even on the backwoods ponds. While there are a number of hard water anglers who will continue to fish through the ice as long as it is physically possible, I am willing to wait.

The trout season provides over seven months of angling entertainment for trout fanatics, while the remainder of the year is filled with bass, perch, pike, walleye, salmon and a host of other species. The only things that slow down the annual angling calendar are the hunting seasons. There is the big game season, the small game season and the various bird seasons for grouse, turkey, woodcock, snipe, rabbit and more.

New York even offers a falconry season. Of course it is important to note the season is not intended for shooting falcons or hawks. It was established to provide falconers with an opportunity to hunt with their birds.

In this day and age, it is interesting to note that the ancient sport of kings is still alive and thriving. I know a bit about it, as does almost every kid who was forced to read “My Side of the Mountain,” which was a favorite of English teachers who wanted to get young boys to pay attention.

Years later, my interest in falconry and raptors in general was rekindled when I found an injured red-tail hawk. I brought the bird to our local vet, and eventually it was sent to Dr. Heinz Ming, a raptor expert who lived near New Paltz.

Although I have never “flown a bird” or hunted with one, I remain enthralled with the process. Oddly enough, my daughter is a licensed falconer, which was a requirement of her position as a guide at The Wild Center.

Despite such opportunities, I have still not had an opportunity to check “hunting with a hawk” off my bucket list. So far, the closest I’ve come was hiring the British School of Falconry to host a hunt for a corporate group that was staying in Lake Placid.

The program, which was hosted by ExxonMobil, was intended to provide the Middle Eastern guests with a taste of American falconry. However, their timing was off by about two weeks. The New York state falconry season coincides with the small game season, and the group could not hunt, even though they were  going to use private property and the game birds (pheasant) were not actually wild birds. We had planned to purchase them from a local game farm.

When I informed the gentleman from Exxon of the change in plans, he wanted to know if there were options.

“Well, the falconers can provide your guests with a hawk walk,” I explained.

I described what the hawk would involve, which was essentially releasing the falcons into the local woods, where their handlers would would “release” the decoy birds that the falcons would target. The fake birds were tethered to a long line that allowed the decoys to fly.

They also offered to host a hawk walk, which involved holding their hands above your head to make a hoop, that the birds would fly through.

The gentleman from Exxon looked at me and laughed, while his cronies huddled and mumbled and discussed the matter.

Finally, the gentleman leaned forward in his chair and chuckled. Then he chuckled some more, and suddenly we were all laughing  out loud.

The president of the company leaned in again, and looked me square in the face.

“Why son,” he addressed me as most Texans will. “If we were to host this falcon show, it would be comparable to the Japanese hosting a rodeo in Tokyo for George Bush.”

After the laughter settled, it was agreed that heading out for some lake trout fishing would more feasible. It was my first introduction to Roy Tillerson, who was CEO of Exxon at the time.

Needless to say, we never flew a hawk, but we did manage to put a laker in the boat before the day was done.

It appears it is easier to wrangle lakers than falcons.