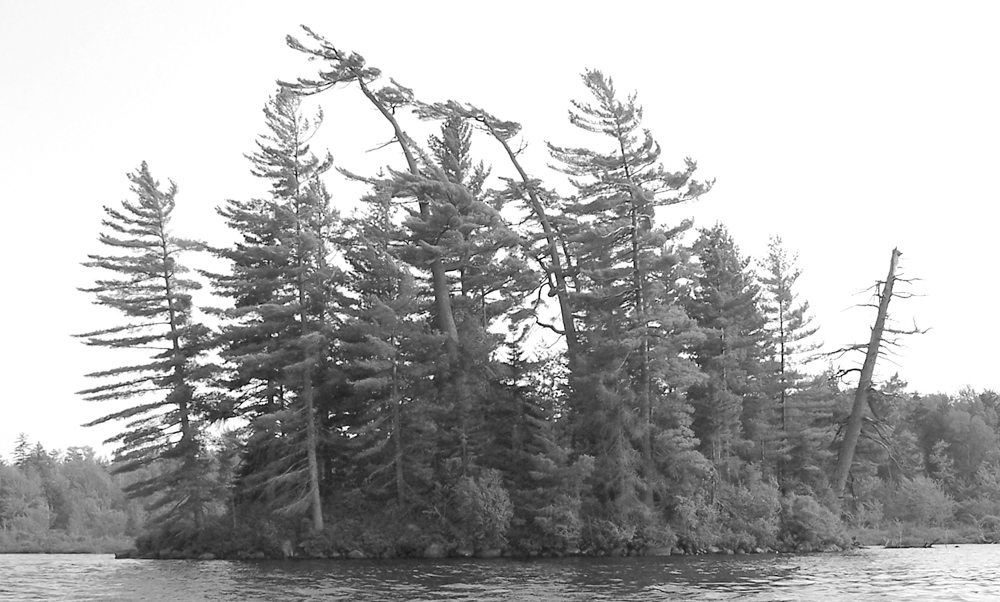 ‘Banner pines’ provide woods walkers with a reliable natural compass as the elongated limbs of tall pines generally point to the west, due to the prevailing westerly winds. (Provided photo — Joe Hackett)

Women are known to have a better sense of direction than men. It is a fact that has been proven scientifically.

Of course, I believe this is due to the fact that  women tend to be better listeners, more attentive and generally more in tune with their surroundings. They are also willing to stop and ask for directions in situations where most men will attempt to bull their way through.

As a married man with two daughters and a pleasant and patient wife, I can’t argue these facts.

Throughout the Adirondacks, there are natural directional signs all over the place. Many of the natural indicators are due to the retreat of glaciers that occurred thousands of years ago, while others are the result of natural circumstances such as prevailing winds, shade and most importantly glacial retreat.

On the summits of our mountains, as well as along the shorelines of most lakes in northern regions, it is easy to locate long gouges carved in the bedrock. These marks were formed as millions of tons of ice retreated.

The long scrapes are typically oriented in a north/south direction. So too are most of the larger lakes in the region such as Lake Champlain, Long Lake and many others.

These rock compasses can easily be found — from the top of the mountains to the bottom of the lakes — for those who are observant. You can also find natural direction signs on tall pine trees, especially white pines that are susceptible to high winds. As we know, our prevailing winds move in a west to east pattern due to the rotation of the earth. These prevailing winds cause white pine limbs to become elongated on the eastern side of the tree, and stunted on the western side. We call them “banner pines.”

There are also a few very easy methods to determine direction with the use of a wristwatch or simply by placing a stick in the ground and marking the direction of the shadow as it moves during the day.

There are plenty of other natural compasses to be found for those willing to seek them out. The problem with today’s society is people are too lazy to bother, or they “don’t have the time.”

One of the finest qualities of the forest is that it always has the time, if you know how to find it. Certainly, cell phones help with orienteering, if the batteries hold up.

At one time, it was the combination of natural observation and orientation that made it possible for humans to reliably predict the weather and to accurately determine the correct direction of travel. It was a perspective that was typically based on an intuitive knowledge of the local landscape, as well as regular observations of weather, animals and other natural signs.

However, it is important to recognize that natural methods of direction aren’t infallible. Always look for more than one indicator when ascertaining a direction. If the sun, plants and wind all indicate the same thing, then chances are they can’t all be wrong!

Similar to determining the proper orientation by observing natural indicators, many travelers have also forgotten how to predict the weather by observing the natural signs.

Well before such modern tools as AccuWeather radar and satellite monitoring systems were available, travelers depended primarily on natural observations to predict the expected weather patterns. Fortunately, many still do. I’m very fortunate in this regard, as I happen to be very sensitive to air pressure.

My ears begin to pop whenever a low pressure system approaches. However, I’ve also learned to recognize many other natural signs that foretell foul weather.

A campfire always provides a welcome signal. While sitting around a fire in the evening, it is easy to spot a “ring around the moon,” which is usually a sure sign of rain, or snow depending on the season.

The ring, known as a corona, is the result of a refraction of the moon’s light in ice crystals at a very high altitude. It typically indicates low pressure and foul weather are on the way.

A sure sign the low pressure system has arrived is often more evident near the fire ring, than by the ring around the moon. Usually, it is accompanied by a damp and musty smell, as smoke from a fire that hangs close to the ground. The heavy, moisture-laden smoke particles do not disperse as easily as lighter, dry ones do in the woods, and the humid air carries scents far better than dry air.

It is interesting to note that bog plants also release more oils as humidity climbs, which explains the old saying, “When a ditch or pond offends the nose, it’s time to look out for rain or stormy blows.”

As evening temperatures begin to plummet across the region, there has been a steady decrease in the nightly chirping of crickets.

The increased intensity of the chirping may not indicate a greater degree of interest in attracting a mate; it may simply be a result of the crickets attempting to stay warm. Whatever the case, their chirping provides a reliable method of measuring air temperature and it is quite easy to accomplish.

Simply count the number of chirps a cricket achieves in 14 seconds, and then add 40 to the total. Check it against a thermometer, and you’ll find it is surprisingly accurate in degrees Fahrenheit.

More importantly, be sure to check the late afternoon sky for Mares’ Tails, those long, tine, wispy clouds that often remain high in the sky near sunset. If clouds are in the air, you probably don’t want to be out there, as rain is on the way within the following day.