Hunters need to think outside the box 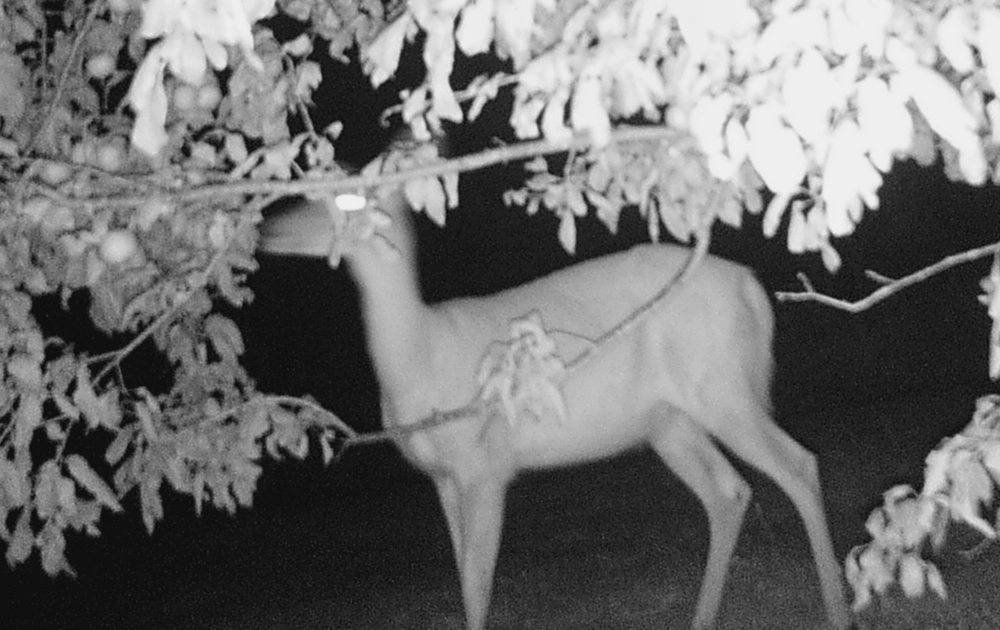 A doe feeds on low-hanging apples in this trail cam photo. (Photo provided)

Each breath appeared to crystallize in the cold morning air as I trudged across a long, open field on the way to camp. The view was only slightly infringed by the steam of my own breath. The entire landscape was illuminated by a brilliant full moon that hung high in the dark sky.

November’s moon, also known as the Beaver Moon, signals the beginning of the rut, which is a magical time for deer hunters. It is an event that triggers the beginning of the breeding season, and it prompts whitetails to lose some of their natural wariness. It is a time when bucks will be looking for love in all the wrong places. It is also a time for hunters to spend their time in the woods, from dawn to dusk.

I was thinking about the hunt, and stepped up my pace as the glow of the oversized moon cast a long, willowy shadow across the trail ahead. According to the Farmer’s Almanac, the Beaver Moon signals a timeframe when the native people set their beaver traps before the swamps froze over.

The thoughts going through my mind at the time had more to do with getting into camp in time for breakfast. The air was crisp, with just a hint of frost on the ground as I hustled off to camp. Moon glow illuminated the steam of my breath, and hoar frost crunched under my boots with each stride. There is no way to walk quietly through the woods in such conditions, when the fallen leaves begin to crunch like giant frosted flakes underfoot.

There are just about as many strategies and concepts on how to hunt deer as there are tricks for beating the casinos in Vegas. In reality, gamblers still have the upper hand. Despite the odds, there will always be gamblers in the casinos and hunters in the woods. They are all willing to take a chance, and it is actually the thrill of the hunt that they seek. Anything beyond that is a bonus.

Although there are some deer camps that seem to defy the odds every year, in the overall scheme of things even the best hunters have gone “buckless” now and then. It’s natural, and the thrill of the hunt wouldn’t be such a thrill if it was always a sure thing.

Despite such realities, there are a number of measures that successful hunters have used to stack the deck in their favor over the years. The first, and most successful, strategy is basic common sense. Spend more time in the woods, preferably during the rut, which is about the only time whitetails let their guard down.

In order to spend more time in the woods, it is important to dress comfortably and control your scent. Deer can scent hunters from great distances, but it isn’t all bad. The use of scents to attract deer into hunting range has tipped the tables in favor of hunters in recent years.

Spanning the spectrum from old favorites such as Tinks 69 and popular aerosols such as Buck Bombs, there is credible evidence that deer attractants continue to put meat on the table.

There are a number of other measures that can be used to tip the odds in favor of the hunter over the hunted. One of the most important concepts is to share the woods with deer, not other hunters. It’s just common sense, but if the trailhead parking lot is full of vehicles and they have empty rifle racks in the back window, it’s a safe bet there are other hunters and/or hikers in the woods.

Remember, deer will scent them just as well as they smell you. They may not know who’s carrying a gun, but they know the scent of humans usually signals trouble. Find your own patch of woods — the farther away from other humans the better.

It’s really not very difficult. Most hunters hunt in areas that are accessible to trails or near roads. But such locations are usually fairly easy to access for hunters who are willing to get creative.

A few years ago, I watched a fellow wade across the trophy trout section of the AuSable River during hunting season. He wasn’t carrying a flyrod, but he did have a canoe with him.

As he neared the far shore, I watched as he hauled a big buck out of the brush on the far bank, and slip it into the canoe. When he returned to the roadside, I helped him drag the big buck up the riverbank.

“I’ve been watching that buck for months,” he explained. “He crossed the river at the same time every day. And I was always coming home from work at about the same time. I didn’t pressure him, but he had been rubbing and scrapping a lot in recent days. Today was not his day.”

The moral of the story for hunters is to think outside the box (or boat). In recent years, I’ve enjoyed a number of canoe float/hunting trips on local, rivers including the Boquet, Saranac, Ausable and the Bog River Flow. It’s interesting to note how often deer and many other animals come to the water.

There are also hunting strategies that favor sitting still and staying put. And there are always the fringe benefits of aimlessly wandering off trail, where you never know what you’ll find. If you decide on this method, it is important to move very slow and stop often. Walk in a stutter step, without a regular cadence. Change it up, even with a short jog when you need to warm up. Most still hunters don’t move slowly enough, or stay in one place long enough.