Muzzleloader season to kick off amid rainy forecast 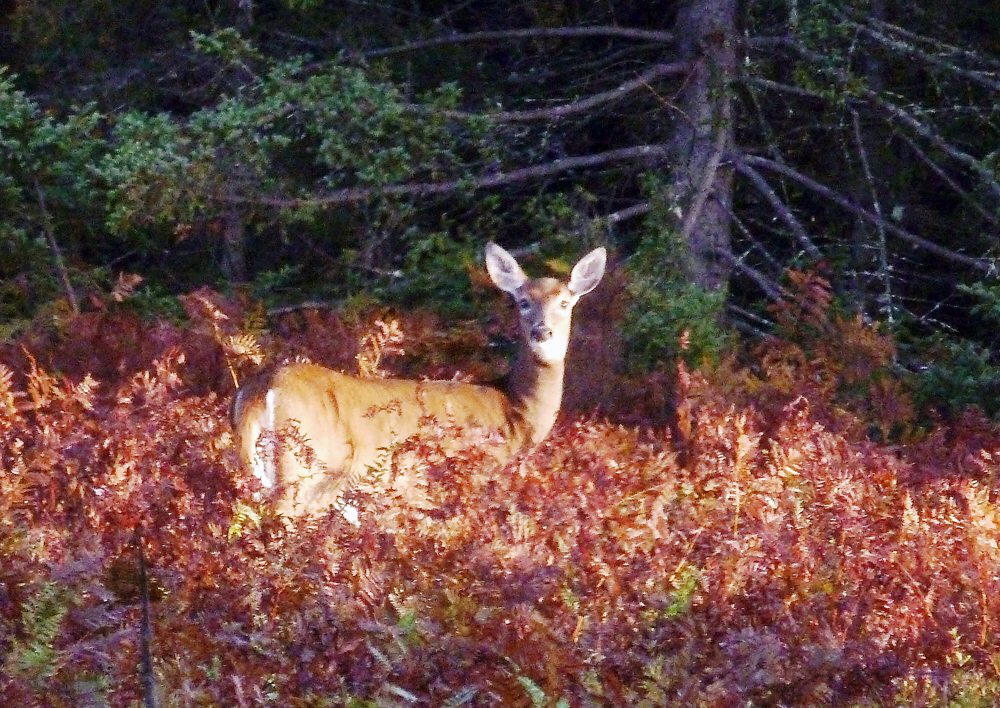 A lone whitetail doe stands on watch while assessing the danger poised by the scent of humans in the cool morning air. (Provided photo — Joe Hackett)

Foul weather always seems to mark the opening day of muzzleloader season, which will kick off over the weekend of Oct. 14. Hunters should prepare accordingly by weatherizing their firearms to ensure a reliable discharge despite the foul, wet weather that’s typical of the season.

It is easy to secure the percussion cap with a length of electrical tape to shed water and keep the charge dry. It is possible to fire directly through the tape, as the hammer strike will still be hard enough to discharge the cap.

I would recommend test firing the rifle in advance to confirm it works. Hunters can also keep moisture from entering the barrel by capping it with a small balloon that is stretched over the end of the rifle barrel. The balloon will not affect the performance of the discharge nor the accuracy of the projectile.

The foliage season is already in the “golden age,” when the dominant colors are mostly yellows, gold and muted red/orange. Beeches, birches and poplars will retain their cover until high winds, rain or snow finally strip the leaves away.

Columbus Day weekend delivered a bit of an Indian Summer, with a bright sun and soaring temperatures across the region. Mountaintops that had been capped in white earlier in the week gave way to a brilliant sky that offered a stunning backdrop for the brilliant fall colors.

Hunters hoped the snow would linger with the opening of the regular big game season this weekend. With a white background, deer do not blend into the woods so easily, and their readily visible tracks provide evidence of their habits and travels.

Sadly, it doesn’t appear that any snow is forthcoming.

Soon, the cold, raw weather of autumn will arrive, bringing temperatures that will drop into the 30s and a heavy carpet of frost over the ground.

The High Peaks will eventually be topped in white and the dull, brown and muted yellow foliage will pass its peak in the upper elevations. Leaves of gold, yellow and brown will replace the flashy reds, crimson and burgundy of the earlier season.

The next few weeks constitute the mellow days of autumn, as the landscape disappears under a deep cover of snow and a mono-chromatic scene of skeletonized trees and a million leafless limbs.

With Columbus Day week complete, the number of hunters in the woods will begin to increase, especially with the opening day of muzzleloader season arriving on Oct. 16.

Foliage will continue to fall as will the temperature as the woods begin to open up to reveal contours of the land and the outline of a whitetail.

Hunting camps will fill up and the camaraderie of camp will serve to renew relationships first established long ago. Soon, pancakes will be flipped, hash slung, eggs scrambled and coffee brewed before the first watchers of the season set off across a carpet of crunching leaves and fresh frost to their their stands for the opening day of deer season.

It is a time for fathers to pass long-held traditions to their children. Those who do usually recall the old saying, “If your kids hunt with you; you’ll never have to hunt for them.”

With the opening day of the muzzleloading season set for Oct. 16, we will usher out the end of trout season the previous day. Not too soon, however, as there are still a host of opportunities to fish for trout and salmon well into the hunting season.