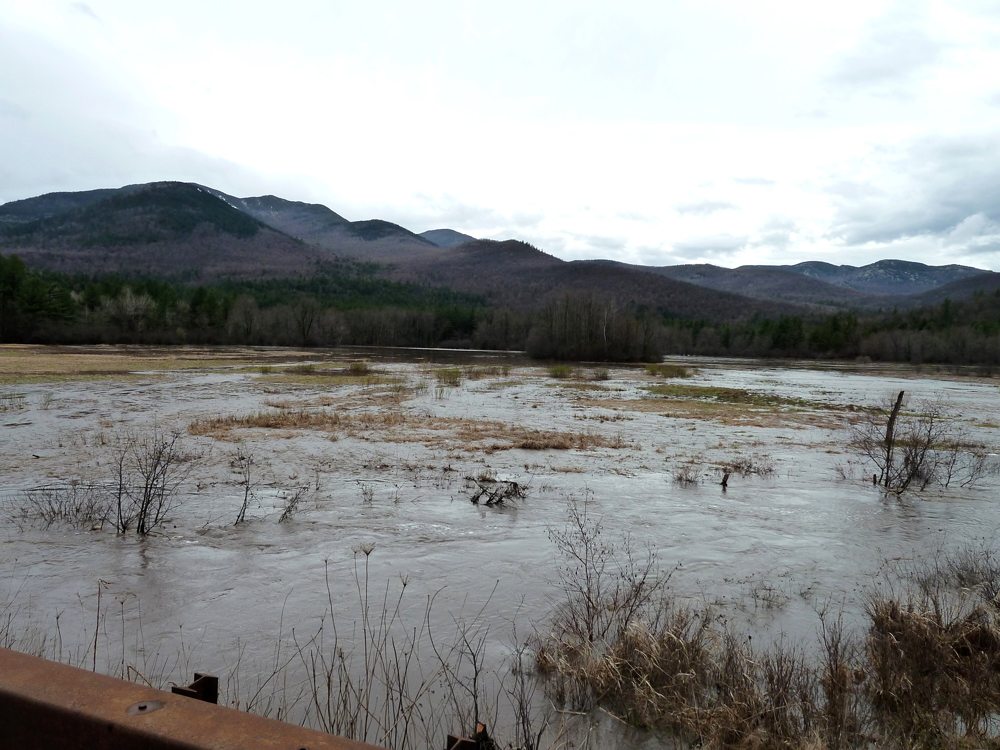 “Keene Lake” at the base of Spruce Hill in Keene, reappeared for several days after Tropical Storm Irene ripped through the area in 2011. (Provided photo — Joe Hackett)

After witnessing the incredible power and natural force of heavy rains, blizzards, floods and electrical storms, I can empathize with residents of Texas and other southern states who have recently weathered the great damage natural events can deliver in the blink of an eye.

Tropical Storm Irene was the most memorable storm to ravage the Adirondack region in recent times. The heavy rains and winds in excess of 60 to 70 miles per hour certainly left a mark and scoured the mountaintops.

I’ve witnessed a variety of violent weather events like this over the years, but the Adirondacks still remains a relatively safe and stable environment for the most part. I’ve seen considerable damage from blowdowns, ice storms and high winds.

Quite possibly, the greatest threat I’ve encountered in the wild came from a natural source. It was the result of a severe electrical storm that shattered and toppled several massive white pines in close proximity to our camp. As the storm intensified, we huddled in a lean-to in order to minimize the risk of falling limbs and toppling trees.

The incident occurred early in my career, while I was hosting a couple for a weekend of camping and climbing in the Dix Range. After summiting several peaks — including East Dix, South Dix and Hough — on the first day, we settled in for the night at a shelter near Dix Pond. As rains intensified, we watched a small stream near our shelter turn into a loud, frothing, whitewater torrent.

We shifted nervously as the stream breached its banks and flooded the surrounding woods. The noise of boulders rolling down the stream-bed nearly drowned out the roaring waters as the rumbling vibrations rattled the floor of the structure.

Although the rain eventually let up, the trails remained full of water and footing was treacherous. Our trip back to Elk Lake ended up being a full-day affair I’ll never forget.

However, after speaking with my relatives in Victoria, Texas, recently, the experience in the Dix Range was simply a walk in the park by comparison. They suffered through three sleepless nights in the dark, without water to drink or a house to sleep in.

The storm that had stagnated over Victoria for 24 straight hours deposited more than 8 feet of water on the city. The once vibrant city has been reduced to a vast wasteland, with boats providing the only traffic on roads that remain flooded.

It reminded me of the frantic hours that were spent with friends and family cleaning up in the aftermath of Irene in 2011.

In comparison with the devastation brought on by Hurricane Harvey, Irene was a mere spring shower. However, it certainly didn’t seem so at the time.

On the morning after Irene, I traveled from Ray Brook to Elizabethtown to help out with recovery efforts in Elizabethtown. During the ride over through the Cascades and over Spruce Hill, the damage rapidly became apparent.

Roads had washed away and bridges were out. The historic Keene Lake reappeared at the foot of Spruce Hill. The storm transformed the entire landscape leaving wide scars on the surrounding hillsides and rerouting many miles of rivers and streams.

The results left no doubt about the forces of nature.