A cautionary tale for this time of seasonal transition 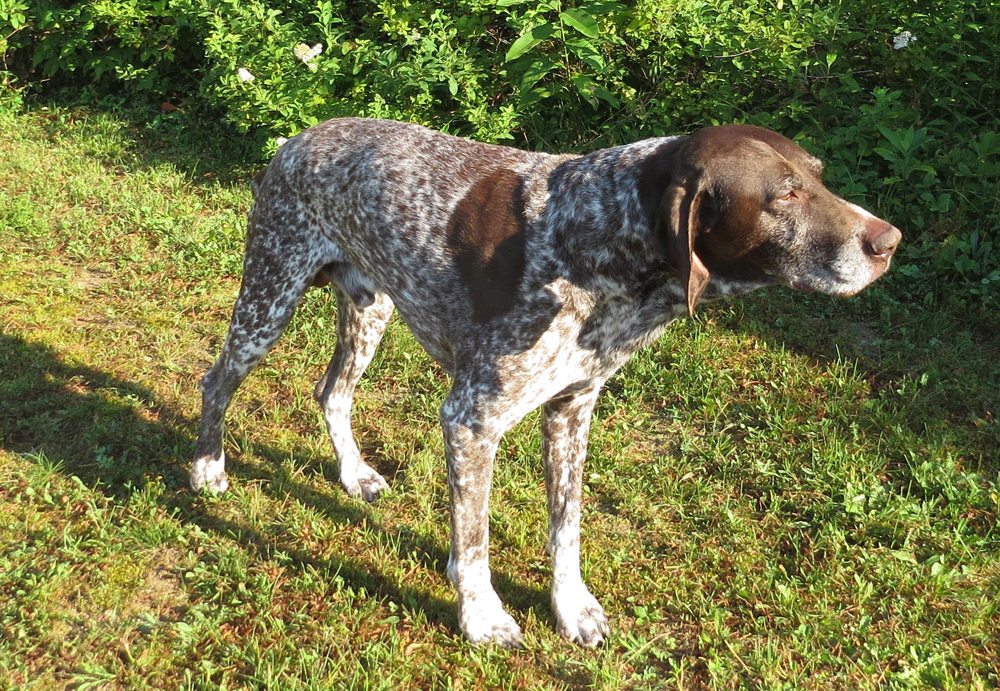 “Gunner,” a German Shorthair Pointer, recently contracted Lyme disease, which is an affliction that has been steadily increasing across the North Country. (Photo — Joe Hackett)

Autumn has finally arrived despite recent efforts to restore the summer season with a brief Indian Summer. Fortunately, the mountain breeze has already tinged the air with a sweet pungency of decay.

Birds have already begun flying south on their annual migration as the local hills and mountains are draped with a technicolor robe.

October has its own unique scent regardless of where you live. Just throw in the musty odor of a wet dog, the damp woods and a whiff of woodsmoke waifing on the still mountain air. It is a scent of sweet decay that you can taste as well as smell.

It is the season of the hunt when the most difficult decision of the day often revolves around whether to fish the backwoods ponds for brook trout or take to the field with a dog.

It is a season of the harvest, and in the Adirondacks, hunting and fishing often provide the harvest, which ranges from small game such as squirrels, waterfowl and upland game such as ruffed grouse, woodcock and varying hare.

There are also wild turkey and migratory waterfowl, including geese and ducks, or upland birds such as turkey. On the big game platter, there are also opportunities for black bear and whitetail deer.

In short order, the same old crews will reassemble for the long walk into camp, where linens will be aired out, mouse turds will be removed and bets will be taken on the first buck, the largest buck and the smallest buck.

It is a short migration, but a long season. Regardless of the actual physical distance, it will be a journey that takes them back to the deep woods, a different age and a quieter time when it has always been easy to escape the worries and responsibilities of everyday life. It is the great out beyond, even though it can often be found just out the back door.

I’ve always been open to taking a risk, whether it involved jumping off a cliff into the lake, skiing the backcountry or paddling some wicked whitewater. However, there’s one risk I’m no longer willing to accept.

I’m a dog guy, and I come from a dog kind of house with a pedigree degree. I still have a painting of my first dog, circa 1963, hanging in my house. My sister is a professional handler, showing various breeds at venues that range from the fabled Westminster Dog Show to the Show of Shows In London.

She knows dogs like I know trout, and we’re equally passionate about our choices. Several years ago, she suffered a bite from an infected tick, and fortunately she sought treatment.

Over the course of a career that began with training the family dog with obedience lessons, she has dealt with tick problems hundreds of times. Although she always recovered, many of her dogs didn’t. The disease is rough on humans and hell on dogs.

The combination of old age, the demands of field work and the effects of arthritic joints have been responsible for taking many highly capable dogs off the “hunt.”

Increasingly, this insidious disease has spread far beyond the confines of Lyme. It is likely as near as your neighborhood pets. If it isn’t currently in your own backyard, it soon will be.

Lyme disease is now prevalent all across the Adirondack region, and you simply can’t avoid it. It arrives on the wings of migrating birds and on the fur of an untold number of critters — ranging from whitetail deer to ravens, raccoons, field mice and more.

I know of what I speak. I have friends and family who are currently dealing with the repercussions of Lyme disease.

In fact, our family dog, a high-energy German Shorthair Pointer was recently diagnosed with Lyme. Sadly, it is much easier to contract the malady than it is to get rid of it.

The process of recovery is very expensive, and the after-effects of the treatment can be almost as bad as the illness itself.

It’s too late for our dog. He will have to live with the arthritis-like conditions for the rest of his life.

I have already scheduled an appointment for a booster shot with our family physician, and I’d recommend the same for anyone who enjoys the Adirondack outdoors. Protect yourself, your family and your pets. Lyme disease is here, and it really sucks!