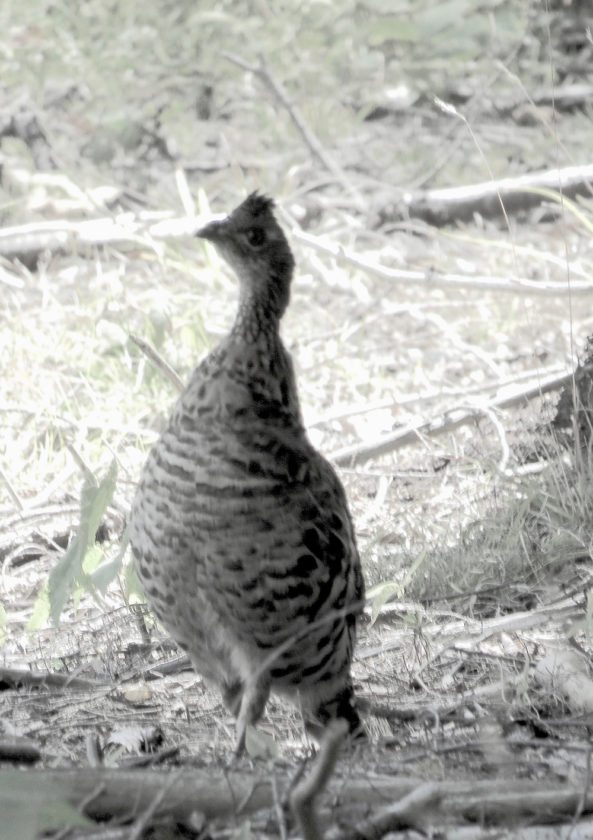 It’s been an interesting week in the woods, with hordes of deer flies replacing black flies while the mosquitoes and no-see-ums continued their annual bloodletting.

Deer flies were orbiting my noggin as I passed over the carries, and I simply couldn’t defend myself while balancing a boat on my shoulders.

Despite the head net, flies continued to attack without mercy. Adding insult to injury, I was also the victim of an unexpected “fly-by” attack, which occurred as I burst through thick spruce and balsam cover along the edge of a small pond. As I stepped out to launch the canoe, a ruffed grouse burst out of the nearby spruce thicket and slammed into the canoe.

After I got myself and my gear back together, another grouse burst from the same cover and landed just a few strides away. It appeared very upset with me, strutting about and puffing up its chest feathers. It followed along all the way to the pond, before disappearing into the thick cover.

It’s been several years since I received a call from a resident of Saranac Lake’s Turtle Pond neighborhood. She wanted to know if there was any way to protect an injured deer from the neighborhood dogs.

Apparently, the deer in question was missing a rear leg. It may have been hanging around the neighborhood for protection from coyotes, which tend to avoid domestic dogs.

I referred her to a friend at the state Department of Environmental Conservation, but I knew there really wasn’t much that could be done. Nature can be equally beautiful and cruel.

I had forgotten about the episode when the phone rang late one evening. It was the same lady, and she was very concerned. It appeared her three-legged deer was now a three-legged mother who would soon have to feed and protect herself as well as her offspring.

We had a very nice conversation, and I explained that feeding wildlife was troublesome and illegal. As our conversation was winding down, she asked sheepishly, “I wonder how a deer with only three legs gets … well, you know … pregnant?”

EPILOGUE: The following spring I caught a glimpse of a group of deer feeding along the far shore. I paddled across the pond and watched as they disappeared among the towering white pines, and sure enough, there she was: the three-legged deer.

Look before you leap

As the dog days of summer approach, it has become evident a trip to the local swimming hole is no longer be what it used to be. With the changes realized by a warming climate, severe weather events have intensified in terms of frequency.

High-water events used to be limited primarily to the spring thaw. Times have changed, and so has the likelihood of experiencing 20-, 50- or even a 100-year flood. I know I’ve lived through about a half-dozen such events in just the past 50 years.

Similar to most local residents, I grew up swimming, diving and cliff jumping. My home waters were primarily within biking range of Elizabethtown. However, the range of available waters increased as trucks, cars and motorcycles provided greater access.

With increased access, came greater heights and more risk. Whether it was a cliff, a bridge or a soaring old pine tree, our pursuit was always the same: maximize the risk and maximize the thrill.

One of the most dangerous local locations has been “The Gulch,” a long, deep canyon on the East Branch of the Ausable River in Keene. Fortunately, the current owners of the property have enforced a strict no trespassing policy and such incidents have been few.

Another popular, and/or notorious, swimming hole is Shoe Box Falls on the upper reaches of the Boquet River. There are also several natural jacuzzis located upstream and down from bridges over both the north and south branches of the Boquet River. They can be reached off state Route 9 and Route 86, just a few miles west of Exit 32 from Interstate-87. About 5 miles north of “Malfunction Junction” on Route 9, there’s another old swimming hole located in the sleepy hamlet of New Russia.

Following the river downstream from Elizabethtown, the Boquet continues to offer a variety of swimming holes, rope swings and cliff diving opportunities, all the way to Willsboro.

The Boquet River, with headwaters in the Dix Range, has the steepest gradient in the entire state. From Split Rock Falls, it has more falls than any other river or stream in the Adirondack region. Nearly every town or hamlet on the river has a natural falls or dam within its boundary, with major falls or pools in New Russia, Wadhams, Boquet and Willsboro. There are also a number of bridges that provide opportunities for diving and/or jumping.

¯Look before you leap.

¯Never swim alone. Always tell someone where you are going and when you’ll be back. Be sure to contact them when you return.

¯Know the waters, and scout the pools with a mask before jumping in.

¯Avoid swimming in rivers or streams following a heavy rain.

¯Wear sneakers or water shoes. Many local swimming holes have broken glass, wires, dangerous metal and similar debris as a result of floods that have ravaged the region in recent years.