Nature finds a way, even in urban environments 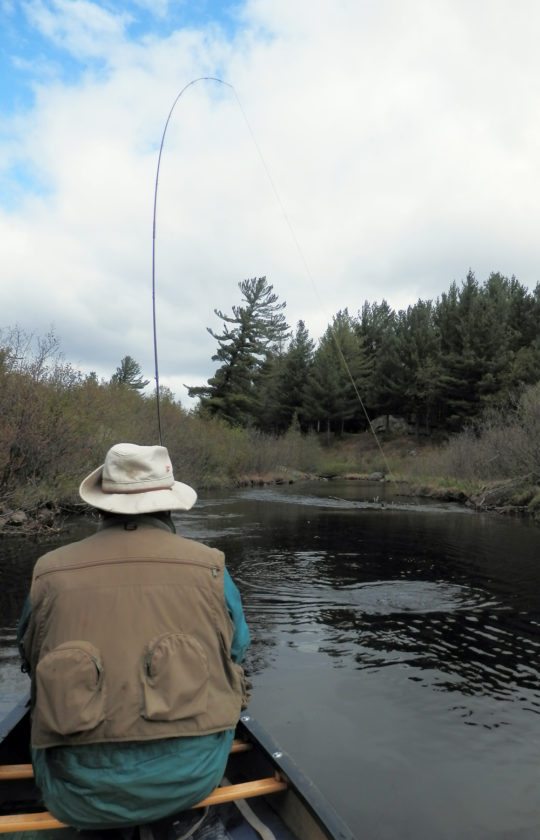 An angler’s flyrod bows under the weight of a fleeting trout on the line. (Photo — Joe Hackett)

Living in the Adirondacks makes it easy to overlook the wealth of outdoor offerings the area provides. There is increasing evidence that indicates human health is linked to exposure to natural areas where clean water, clean air and beautiful, peaceful surroundings provide opportunities for reflection and inspiration.

This struck me as I returned from a recent visit to New York City, where a great mass of humanity remains immersed in a most unnatural environment. The “city that never sleeps” certainly lived up to its reputation — 24/7.

It was as difficult to escape the noise, the throngs of humanity and the business of business that was on display everywhere. Despite the occasional pocket parks, which are defined by a token patch of grass and a token tree or two, there are very few opportunities to experience the all-encompassing deep green, relief that’s readily available, just a few miles to the north.

Although the mighty Hudson and the lesser East River continue to provide city-goers with pockets of uniquely recycled greenness, there is no way to escape the perpetual din of our modernized, mechanized, homogenized and oversized society.

Despite the multitudes of unnatural visitors who continue to call NYC their home, nature remains resilient. It continues to return and reclaim every single patch of wild land or water that is available. New York Harbor continues to host seals, porpoise, river otters and even the occasional shark. Birds of all sorts continue to be found in the middle of all the growing modernity, where even coyotes actually have an established presence. Nature restores it’s own.

It is important to remember that the long, green link that connects New York City and the Adirondacks was actually a driving force in the development and creation of the Adirondack Park. The accomplishment has long been recognized as one of the most ecologically significant, far-sighted and socially important decisions in the history of New York state. It was especially important for the “natural buffering and connectivity services that were provided by the watery link.” Without the establishment of the water link, the societal connections may never have occurred.

The growing appreciation for wild lands and the importance of protecting them from development led to the creation and protection of the Adirondack Park in 1892. Without such foresight, the local landscape would likely present a far different scene than it does today.

The decision to create a park for the enjoyment of the people — rather than for the exploitation of natural resources — was a decision that set a new standard for the wise use and protection of wild lands all across the country.

To date, the season has produced some of the most productive angling opportunities in recent memory. Despite heavy rains that fell in sheets rather than drops, water levels have leveled out, and fish are on the take.

Although the heavy rain and high waters made it difficult for wading anglers, the flash storms infused oxygen — and plenty of food — into the waters. I’ve had reports of double-digit catches on the trout ponds in the morning, followed by a boat load of bass in the afternoon.

With that kind of action, it would appear there’s just no sense in pursuing fish during the evening hours; but you would be wrong. Over the past few weeks, I’ve enjoyed some incredible action while tossing poppers for bass on both Lake Colby and Mirror Lake, where we were surprised to hook the occasional rainbow while trolling a bass poppers.

Although trolling popper bugs is not as exciting as witnessing the actual strike, it often results in a double hookup since a fish in distress tends to attract other fish. Try it while fishing with a friend to see how many consecutive hookups you can achieve. We’ve actually landed over a dozen bass with repeated casts.

Getting away from the lakes and ponds to hit the smaller streams, I was pleased to find they are still running cold, and oxygen rich due to runoff from the rains.

In my travels, I’ve also encountered a fair share of whitetails, and judging by the average size, it appears this year’s crop will be fit and fat by the time the season rolls around.

And I would be remiss if I did not offer a word of warning to be aware of the potential for heavy rains, lightning strikes and high winds. Evidently, I’ve discovered a new breed of deer flies that can orbit my head in opposite directions, relentlessly.