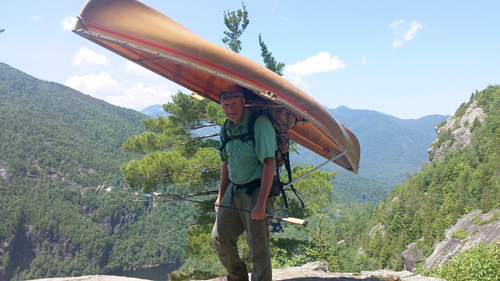 An Adirondack angler stops to enjoy the view from Giant Nubble after an afternoon of trout fishing in Giant Washbowl. (Photo provided — Joe Hackett)

It’s official, the spring season is now firmly entrenched. Wild flowers are blooming and the trout are jumping. Black flies are in my hair and behind my ears.

Fortunately, the mayflies have been back on the local waters, and so have I. In fact, I’ve just returned from a creel survey of local waters, which was conducted primarily at the far end of a flyrod.

I have yet to visit the upper-elevation waters, which I expect will soon be offering some fast and furious action for anglers who are willing to put in the time and effort to get back there.

Although the state Department of Environmental Conservation continues to stock remote waters by air, many of the ponds receive very little pressure. It requires a bit of an effort to haul a raft, or a pack canoe back into such waters, but it’s usually worth the effort. There are more than two dozen backwoods ponds located within easy striking range of the village of Lake Placid, and they attract fewer than a dozen anglers annually.

The formula is easy to understand. The distance from the nearest road is inversely proportional to the quality of the fishery. The more difficult the access, the better the fishing.

The little brooks and the larger rivers are currently putting out and the looming Hendrickson hatch will likely kick off a long spell of outstanding dry fly fishing on the West Branch of the Ausable, the Saranacs, the Boquet and the smaller streams.

Water temperatures and water levels are holding up well, all across the region and it appears the trout have been biting more readily than the black flies.

In recent years, numerous studies, surveys and experiments have attempted to quantify the positive effects of exposure to nature. Increasingly, these efforts have centered on how much exposure is enough. I wonder what we would do if studies revealed we are spending too much time outdoors. Is it possible to suffer a green overdose from spending too much time in the field or at the beach? It’s not likely, but I would be willing to serve as a “lab rat” if researchers are still looking for one.

Why do we take to the woods?

The outdoors is our original environment; we have only adapted to living in shelters over the past 10,000 years or so. Prior to our gradual transition to a semi-civilized existence, humans were actually part of the wild landscape.

Current-day humans are the common ancestors of humans and Neanderthals. Researchers estimate humans have been around for approximately 20,000 to 25,000 years and share 99 percent of their DNA with the now extinct Neanderthal.

Despite continuing efforts to develop modern day humans into a civilized culture, there remains an undeniable undercurrent of wildness in our composition. We are comfortable and at ease in natural habitats.

Dentists and doctors have long recognized this innate trait. It is the reason they often have aquariums in their waiting rooms. They know fish tanks and green displays have a calming effect on patients. Several recent studies offer robust evidence that a patient’s dose of exposure to natural settings can actually have a positive effect on people’s well-being.

Researchers conducting the study concluded that, in general “as duration of exposure to nature increased, people became both more positive and calmer.”

The results of the study suggest any exposure to nature has a positive effect, and being truly immersed in a natural environment is even better. The exposure doesn’t necessarily need to take place in a pristine wilderness, as even a built environment such as an aquarium or a zoo will do just fine.

What’s more, the fact the most robust effects were noted in the first five minutes suggest the initial, calming dose of the natural world has the greatest impact on our health and happiness.

So don’t let a busy schedule be an excuse to pass up a walk in the park, or pass up the opportunity to put in a few hours on the stream. If you’re suffering from excess stress, you’ll benefit from spending time in the woods or on the water, even if the trout fail to cooperate.