First cast of the fishing season 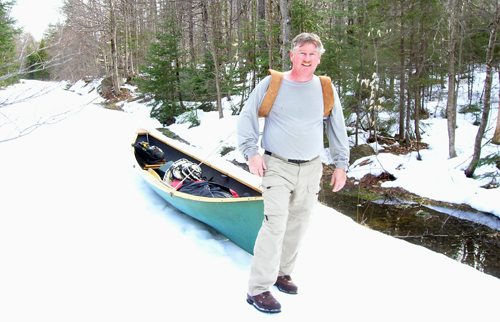 Joe Hackett is ready for anything as he skids a boat across the snow on the way to go fishing. (Photo provided)

As I gaze out the window of my home in Ray Brook, there are a dozen wild turkeys strutting around the side yard, pecking for leftovers near the bird feeder. The resident red squirrels beg to differ as they threaten the large feathered interlopers with a barrage of chatter and whistles. In their frustration, the squirrels continue to scold an assembly of robins that prefer not to get involved in the squabble.

With the possibility of warmer weather on the way, the local snowpack has already diminished considerably. However, it’s still holding up well in the deep evergreen forests, which will allow anglers to skid their canoes over the carries, rather than hauling them on their shoulders.

The ski season has finally completed the full transition to the fishing season as fishing poles replace ski poles and GoreTex outerwear becomes the fabric of choice. Enjoy the early season while you can. The next wave will not involve weather issues, it will be all about bugs, flies and flying teeth.

Ice-out is currently occurring all across the region, and many of the smaller ponds have already shed winter’s hard hat. Lake Colby will likely be out soon, as will most ponds in and around the St. Regis Canoe Area. Ponds in the Lake Placid area will likely follow soon after.

Evidence of good fishing soon to come is all around. I’ve already heard the mad laughter of loons echoing on the night air, and I’ve listened to the great flocks of Canada geese as they continue on their annual trek home.

I’ve already been out paddling on the streams, where a deep snowpack currently protects an even thicker icepack. However, to date, outdoor travel has been relatively easy this season, even though it has historically provided an unpleasant mix of frost heaves, rutted roads, drifting dirt and the usual clutter of roadside debris that becomes so glaringly evident when the snowbanks melt.

The spring season has continued to unfold on time. There likely will be a few ponds that ice-out to provide open water opportunities by Mother’s Day weekend. Loons have already been sounding their soulful songs as they return to their traditional waters, while piliated woodpeckers have been pounding on the trees and wood ducks raft up on the river.

Following the arrival of the first heavy rains of the new season, spotted salamanders will begin their annual march to the marsh, where they will breed and rapidly recede. The next tune on the swamp song stage of the wild woods will be a wetland chorus of spring peepers that will conclude with a throaty, jug-a-rum from the bull frogs in the bog.

Along the way, there will continue to be a regular cast of wild characters that will add their voices to the equation, as they continue to look for wild love in all of the old familiar places.

In addition to the usual cautions regarding renewing your fishing license, wearing a PFD on your person and watching out for mud holes, sink-holes and a few of the other such “holes” you’re likely to encounter in the local woods.

Don’t forget the basics. It’s much easier to field dress your rod and reel, respool the line and rig up Lake Clear wabblers, Christmas Trees and the rest of the old, familiar gear in the comfort of your warm and comfortable home.

Take the time to get your stuff together before you hit the water, and toss out the junk that’s left.  If you’re too cheap to respool your line, at least trip the first 20 yards of twisted, line off your reel.

With the potential for rain on the horizon, it’s time to stock up on jigs and flies that imitate spotted salamanders, leeches and newts in a variety of sizes and colors. All of these critters will be heading off to the nearest pond with the arrival of the first rain after ice-out.

Over the course of feeding for two or three days, a 2- or 3-pound brook trout can easily put on an extra pound or two at this time of year. Although the standard Wabbler/worm rig will certainly put fish on the table, traditional tackle will not produce as well as a 1/8 ounce black fur jig, a large, black Yumm jig or a Berkley soft bait leech swimming along the bottom.

For the long rodders in the mix, I would recommend tossing a black fur/yellow spotted streamer fly on a sink tip line.

I like to work such offerings in and around the shoreline brush and bushes, especially on the eastern shorelines where the prevailing winds will push the warmer surface water. Warm water is more dense than cold water, and as a result, trout will often be feeding actively near the bottom of the water column, in 5 to 10 feet of depth along the shores.

While most anglers are likely anxious for a meal of fresh fish, it is important to take only what you’ll eat and release the rest. Fish will begin to lose their firmness almost immediately after they are taken.

Freezing fish will result in even further deterioration of the meat. The best method to ensure a fresh fish meal is to release any fish that will not be consumed within a 24-hour window.

Until next week, good luck, and good fishing.