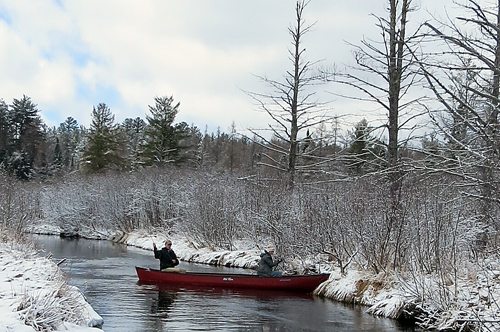 The annual trout season opened on April Fools’ Day, with a majority of the lakes and ponds in Adirondacks still locked in ice. Ice jams continue to clog many of the rivers and streams as well.

Spring thaw usually arrives some time between the middle of May and the middle of June, although there have been years when the local lakes and ponds were still covered in ice until June.

However, the most consistent date for ice-out has remained Mother’s Day, the second Sunday in May. The arrival of ice-out has fluctuated widely, especially in recent years as the impacts of climate change have become ever more apparent.

It is important to recognize that ice-out on the lakes and ponds does not always correlate with open water on the rivers and streams, which will run full of ice, trees and snow melt.

It is always interesting to note the rapid advancement of birds and animals that occurs in the aftermath of ice-out. It seems that the ducks, loons, geese and a host of similar winged visitors can instantly be found on the ponds and lakes. In fact, the eerie, lonesome laughter of loons has always been the tune that seals the deal. If the loons are laughing, it’s a safe bet there’s open water within shouting distance. 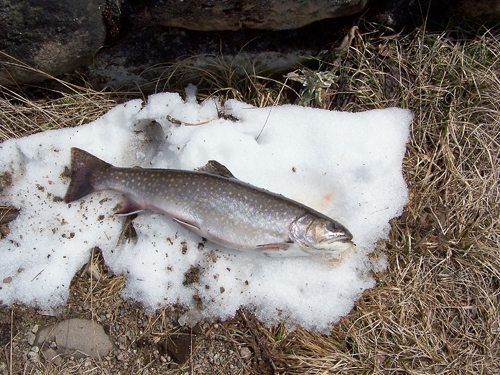 While my usual first outing of the new season typically occurs on the ponds. I was out on the streams this year, casting flies to pods of native brook trout that were feeding in the shallow waters of a local flow. Although there were more snow flies than dry flies in the air, there were several fish taken, including one healthy specimen that was destined for a frying pan.

Although the weather conditions were more conducive to skiing or snowshoeing, my guests were thrilled with the opportunity to be on the water casting flies. We completed our day with a brief skiing excursion along the railroad tracks before packing up the skis, the poles, the fly rods and the canoe.

Burst into spring with the kids in tow

More than any other season of the year, the burgeoning burst of wildlife that occurs during the spring season provides an ideal opportunity for parents to get their kids outdoors. Whether it involves hiking, biking, paddling, birding or a tour of local waterfalls, it’s time to shake the snow out of the scene and welcome in the new season.

Kids simply aren’t getting out like they used to, and  often when the do, they don’t have a clue on how to conduct themselves. It is important to get the kids out, for both their physical and mental health.

Research confirms that people who regularly recreate outdoors and have participated in outdoor recreation while growing up are more likely than others to be completely satisfied with their lives.

Further research reveals those who recreate most often are more likely to be completely satisfied with their choice of careers, friends and their perceived success in life.

Unfortunately for a majority of the country’s population, the pleasures of outdoor recreation and wilderness travel are no longer considered to be a normal part of everyday life. Despite this reality, there lies buried deep inside nearly everyone an untapped desire to pursue the pleasures and challenges that outdoor adventure provides.

Local kids are fortunate to have quick and easy access to outdoor recreation, which is often available out their own front door. However, if they do not have the skills, knowledge and the proper tools (bikes, skis, fishing poles, canoes, cameras, etc.), the outdoors can be perceived as boring, intimidating or “just stupid.”

It is interesting to note that several states have recently enacted legislation to confirm a Children’s Bill of Rights. California was one of the first states to pass regulations. The legislation includes a Statement of the Problem and proposed methods to address it.

It reads: “After tens of thousands of years of children playing and working primarily outdoors, the last few generations have seen such interaction with nature vanish almost entirely. The implications for children’s physical and mental health are immense. All California children will be inspired to actively and creatively engage with and appreciate the natural environment.”

Goals of the bill include:

To promote California State Parks and provide opportunities for kids to get outdoors.

To increase the number and capacity of organizations working to connect children with nature.

To engage the private sector for funding and other support for the campaign.

To help provide opportunities for children to play in the natural environment.

To further the welfare of California’s children through the following: Encourage children to experience nature and the opportunity to develop a sense of wonder and joy for the natural world.

Build children’s knowledge of the interconnectedness of natural systems.

Nature-based recreation as a whole been declining every year since the 1980s, for a total decline of roughly 25 percent. In 1969, 50 percent of U.S. children walked or biked to school. In 2004, less than 13 percent did.

The area in which children are free to roam has shrunk by 89 percent in the past 20 years.

Unfortunately, the majority of Americans no longer consider outdoor recreation and wilderness travel to be a normal part of everyday life. As a nation, we have become increasingly detached from the outdoors.

When humans travel and play outdoors, they are in fact going back to a more relaxed and peaceful state. Despite over 2000 years of civilized living, nature is still the primary ingredient in our makeup, and it only takes a few steps off the beaten path to rekindle natural instincts that are hidden inside of it.

Fishing poles are tools that can be used to combat attention deficit disorder.