Brookies, turkeys and a five-star challenge 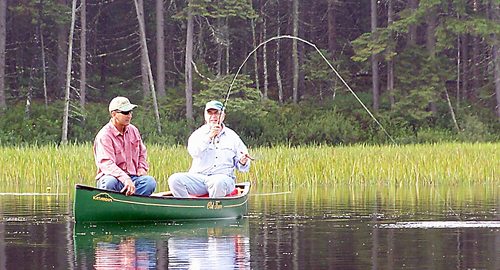 Fishermen stay relaxed as they cast a line in a local pond. (Photo — Joe Hackett)

The burgeoning spring season has rapidly reclaimed the land from the remaining depths of winter. Although snow remains in the upper elevations and in the thick evergreens, the lakes and ponds are fully open and trout are on the prowl.

Brook trout and salmon have been feeding heavily on leeches, salamanders, nymphs and bait fish. Lake trout can be found near the shoals and shallows, where they have been taking both lures and flies. It will be a few weeks before the black flies arrive, and, believe me, the flies will arrive.

On the ponds, brook trout and land-locked salmon are slowly beginning to stir. The annual march of spotted salamanders to the ponds has already occurred, as similar traditional totems of the season continue to chart the process of the flourishing season.

Peepers are peeping and grouse continue to drum. Canada geese continue to bark their way north as loons return to familiar waters. Wildlife continues to be on the move, and with the looming opening day of the spring wild turkey waiting in the wings, it appears there are just too many sporting options available.

The annual Youth Turkey Hunting Weekend took place April 21-22, to be followed by the spring turkey season which begins May 1.

Although I remain focused on fishing for brook trout, I’ve also been spending a lot of my time hunting for a giant whitetail. Unfortunately, the big buck is no longer on the hoof, as it was shot more than a century ago. Taken in the Paul Smiths region during the late 1890s, the big buck sported a most unusual rack, which included 42 points, and a variety of drop tines, palmated tines and nearly too many tines to count.

The purpose of my inquiry is to verify the existence of the big buck for a potential television production that’s in the works. Reportedly, a head mount of the fabled buck remained on display in the St. Regis-Paul Smiths area for many years, before it was lost in a fire.

The renowned Barney Fowler, a popular Albany newsman and the author of several Adirondack stories, attempted to locate the mystery rack for many years to no avail. Currently, the only evidence of the fabled Paul Smiths “racker,” is an artist’s rendering from a photograph.

The drawing illustrates the buck’s unique palmation, with drop tines and dog tines that are surprisingly similar to a smaller, yet still impressive, specimen that was taken last season by Paul Smith’s College student Justin Fabian. The two bucks appear to share some of the same genetic stew.

My efforts to track down photographic evidence of the tangled, 42-point racker will continue. Any information or leads that are provided will be most appreciated.

The spring season provides outdoor enthusiasts with an opportunity to accomplish a unique triple sporting treat, similar to the fabled British Macnab.

The traditional Macnab Challenge involves taking a salmon on the fly, a brace of grouse on the wing and harvesting a Red Stag on the stalk, all in the same day.

Conducted on the private estates of European gentry, a Macnab will set a traveling sportsman or woman back about $20,000 to $30,000 — regardless of their take. While it’s unlikely any sportsmen or women will encounter a red stag in the Adirondacks, there is a comparable sporting opportunity available. The challenge, known as The Five Star + 1, entails harvesting a wild turkey, and landing a brook trout, brown trout, rainbow trout and lake trout on the fly, all in a single day.