The voyage of the Ludgate Hill 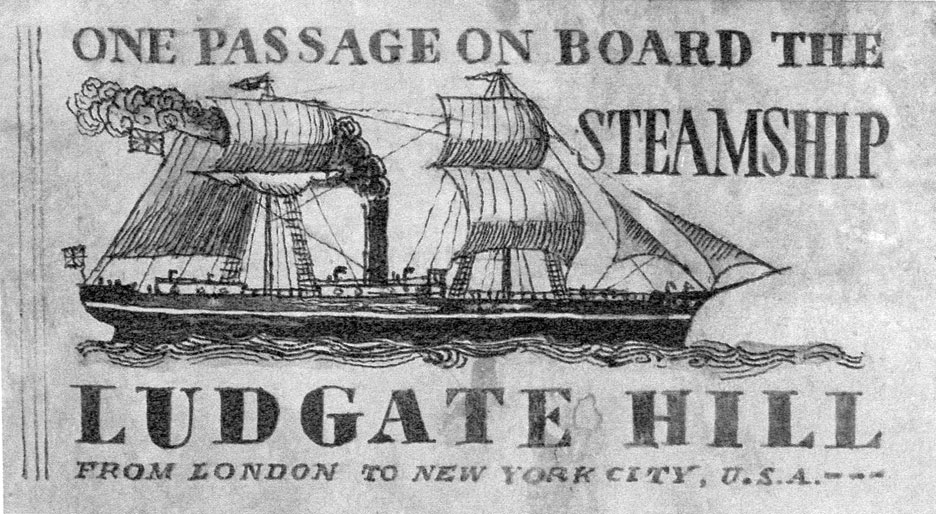 A ticket for the steamship Ludgate Hill, from London to New York

“Dr. Balfour insisted upon Louis going to Colorado for the next winter, and advised us to start in August that we might get the smoothest weather for crossing. He says that Louis can never be well again, and must always be subject to hemorrhages, but that he might have much more comfortable health than he has now.” — Mrs. Robert Louis Stevenson (Fanny) to Henry James, June 14, 1887, Skerryvore

Soon after sending her letter to Henry James, Louis and Fanny had a new American guest to dinner. Charles Fairchild (1838-1910) was a younger brother of Gen. Lucius Fairchild, the distinguished American soldier and diplomat.

At first a lawyer, he became a wealthy Boston banker and businessman, and president of the Fairchild Paper Co. Charles was a friend and patron of John Singer Sargent, who painted many portraits of the family, and he it was who commissioned the portraits of RLS at Skerryvore as a present for his wife, Elizabeth, who was an admirer of Stevenson’s work. Sargent had known Stevenson since 1875 and had sent his condolences to Louis about the death of his father Thomas Stevenson, and also that Fairchild would like to meet him.

When that first meeting with the rich American was over, Fanny wrote all about it to her mother-in-law, Margaret Stevenson: “Thursday, 23 June 1887, My dear Mrs. Stevenson — We have had our American guest and Louis is enchanted with him. We gave him the worst dinner that ever a millionaire ate and I was horribly mortified in consequence.” Fanny then describes in detail how the baked fish for dinner was put in the cellar to cool, where the cat found it and left unservable remains. Then Valentine, their Swiss servant, came in and said, “I forgot to order the cream yesterday, and as I have arranged for a white vegetable soup. I don’t know how to make it without cream; also, there is the whipped cream for the pudding which I must have.” Then Teddy Henley, the brother of William Henley, showed up without warning, and he liked to drink, and then this went wrong and that went wrong, and finally, “Can you conceive of a more mortifying fiasco? Such a thing never happened to me before, and I thought it couldn’t, so I was all unprepared.”

That botched dinner was a bad start to a good thing. Charles Fairchild would play a role in the next chapter of the RLS story; he and the Mrs. would even come to Saranac Lake.

Fanny was referring to Charles when she ended her letter to Margaret: “The millionaire had a special train sent down to take him back to London. He is a sweet fellow, and is going to arrange all our traveling plans from New York to the west, and find out exactly where we had better go and about a house to live in and all that. … The Fairchilds spend the summer at Newport which is the most fashionable place in America. They have a cottage there … they propose we go directly there. … Dear Love to you all, Fanny.”

Robert Louis Stevenson was about to make his second voyage to the New World, eight years later to the month after his perilous quest to California, which you can read all about in “The Amateur Emigrant” and “The Silverado Squatters” by RLS. Arrangements were made for the sale of Skerryvore, and Fanny bought tickets for five to board the cargo carrying steamer Ludgate Hill, bound from London to New York via Le Havre. Sidney Colvin had advised his friend to use a less-frequented line to enjoy “space and air rather than luxurious arrangements.” They didn’t know until they reached Le Havre that the cargo of the less luxurious Ludgate Hill would include 100 horses and a consignment of apes for American zoos, along with hay and matches. But the Stevenson expedition had been in strange situations before, and its newest and oldest member, Margaret, now 60, recorded that they all agreed “to look upon it as an adventure.”

Before going aboard ship, the voyagers to be spent two nights at the South Place Hotel in Finsbury, and farewells were exchanged with a number of friends and relatives including Henry James, William Henley, Alison Cunningham (his childhood nurse, the “Cummy” of “A Child’s Garden of Verses”) and his cousins, Bob Stevenson and his sister, Katherine De Mattos. Two of his visitors — Sidney Colvin and Edmund Gosse — would go on to be knighted by the Crown before serving as British representatives of the Stevenson Society of America in Saranac Lake. They all remembered the first time Louis went to the New World. They didn’t want him to go then, and they didn’t want him to go now, and for the same reason — but this time their fears would be realized. RLS was leaving for good; he just didn’t know it yet. He would never see his “Hills of Home” again, but he would write about them till the day he died.

In seven years, August 1880 to August 1887, Robert Louis Stevenson had lived in four countries, namely Scotland, Switzerland, France and England. There was something ominous in the air when the Stevenson expedition boarded the Ludgate Hill. This was not your ordinary seasonal migration between health resorts. After getting settled into their staterooms, a case of champagne was delivered courtesy of Henry James “for seasickness.”

On Aug. 22, the Ludgate Hill weighed anchor and floated down the Thames, headed to sea, where Louis would rediscover his element. Sea air had always done wonders for him, and this time he would remember. He was in high spirits despite the gales and continual high seas. Louis and his mother were exempt from seasickness, and how pleased must Mom have been to see her Lou, the “weevil in a biscuit” of Skerryvore, roaming around the ship making friends with apes, horses, officers and deck hands, and prescribing his champagne to seasick fellow passengers. From Saranac Lake, Louis would later relive the experience to cousin Bob:

“I was so happy on board that ship. I could not have believed it possible; we had the beastliest weather and many discomforts; but the mere fact of it being a tramp ship, gave us many comforts … And truly there is nothing else. I had literally forgotten what happiness was, and the full mind — full of external and physical things, not full of cares and labors and rot about a fellow’s behaviour. My heart sang; I truly care for nothing so much as for that. … It is worth having lived these last years, partly because I have written some better books, but chiefly to have had the joy of this voyage.”

Something else happened about two days out from New York. From a letter to Henry James from Newport, Rhode Island, dated 18 September, 1887: “I caught a cold on the Banks after having had the finest time conceivable and enjoyed myself more than I could have hoped on board that strange floating menagerie.” That cold came with far-reaching consequences. For example, without that cold, you would never have read this.