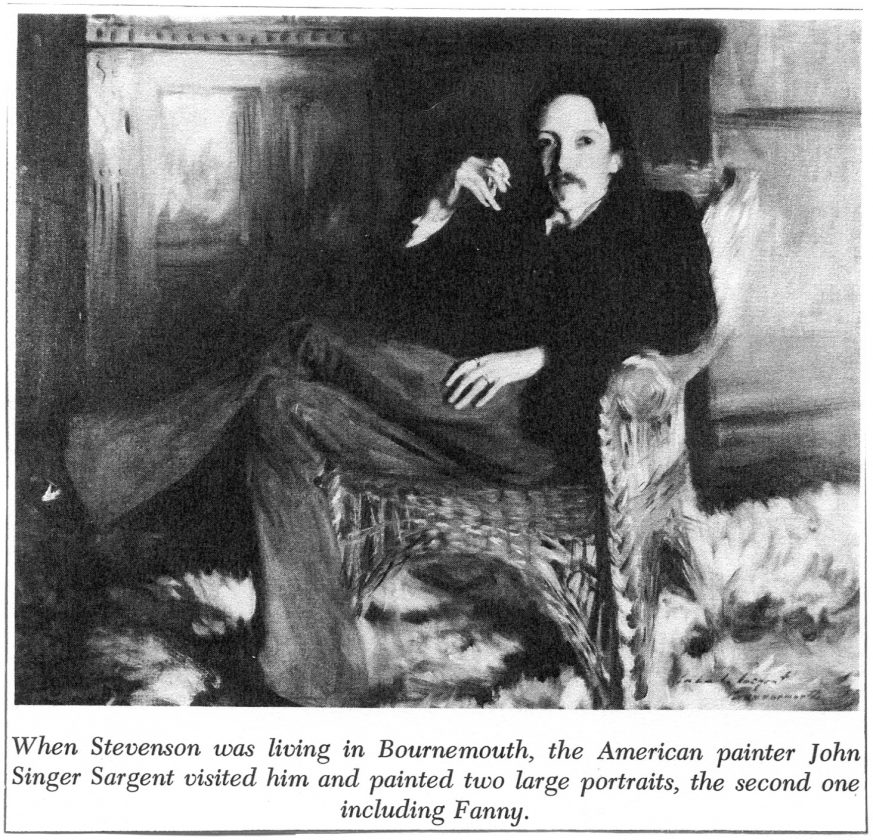 “Nearly all the time which was not devoted to contending with illness was taken up with his work, and as he rarely left home without returning in a more or less disabled condition, he stayed in his own home and led the most retired of lives.” — Graham Balfour, “Life of Robert Louis Stevenson”

In the autumn of 1885, Mr. and Mrs. Robert Louis Stevenson set out on a trip into the West Country to visit Thomas Hardy. Along for the ride was Stevenson’s cousin Mrs. Katherine De Mattos, sister of cousin Bob and daughter of Uncle Alan, builder of the Skerryvore lighthouse. Katherine was still coming to terms with her short-lived marriage that had come to a painful and complicated end, and she recognized the therapeutic value of spending some time on the road with family.

Her presence was welcome, especially when her cousin Louis took ill on the return trip in a hotel in Exeter. It was “Bloody Jack” again, meaning the author’s hemorrhaging lungs, in one of his most vicious attacks. This traumatic event for the family had a freaking-out effect on the hotel staff, who did what they could to help. RLS would be their guest for several weeks before he could return to the house he called Skerryvore in Bournemouth, England, and stay there, apparently forever.

To Louis, it might have seemed like the walls were closing in. He had been born with a pathetic physical constitution and was already an invalid when he made his desperate voyage to America in 1879 to find Mrs. Fanny Osbourne and somehow make her into Mrs. RLS. In that he succeeded, but his skeletal body had paid a heavy price with a seemingly permanent downward spiral of his health. Now it looked like even taking a trip was too risky; next a walk in the garden or along the cliff was too risky; even changing his shirt was risky because raising his arms, so he was warned, might trigger a hemorrhage. This over-restrictive existence in Bournemouth is what he meant in a letter to Henry James years later when he said, “Remember the pallid brute that lived in Skerryvore like a weevil in a biscuit.”

It is understandable that depression would have made a home in Stevenson’s head or anybody’s in such circumstances. When Sidney Colvin came to visit one day, Louis was in the garden, staring out to sea. Colvin came up from behind and when his friend turned his head, Colvin wrote down years later in his “Memories and Notes,” what he saw, “a face of utter despondency, upon which seemed stamped for one concentrated moment the expression of all he ever had, or might yet have, in life to suffer or renounce.”

Along with modeling in clay for diversion, Stevenson became obsessed with music. He had tinkered at it periodically, but now, at least to Fanny, his wife, it seemed to be a vehicle for withdrawal that worried her. Up to the time when he was studying law at Edinburgh University, in his early 20s, Louis had no interest in music, per se, it was just another part of the grand scheme. Then someone gave him a free ticket. Says Graham Balfour in his RLS biography: “In these years he first discovered his taste for classical music. The revelation dated from a concert in Edinburgh for which someone had given him a ticket, and to which he went with reluctance. It was a Beethoven quartet, I think, that then burst upon him for the first time, and on that day he permanently added another to the many pleasures he so keenly enjoyed, although it was some years before he attempted to make any music for himself.”

There was a catalyst to the Skerryvore music revival and her name was Adelaide Boodle, a young girl living with her mother nearby. Adelaide would be a regular at the Stevensons and would write her own memoir about it called “RLS and His Sine Qua Non,” in which she recalls the moment it all began. Louis and Fanny were at the moving in stage when Adelaide and her mother dropped in for a welcome to the neighborhood chat and first saw her skinny new neighbor “perched on a packing-case, emphasizing his words with a brandished teaspoon.”

Adelaide Boodle was an amateur violinist who helped to rekindle Stevenson’s interest in music. The piano was his first new toy, and then came the famous penny whistle, his portable device to summon the muse, any time, anywhere, the same one resting today in his former study at Baker’s, where he once tootled on it and by which he acquired the local nickname, “The Penny Piper of Saranac,” also a book. Adelaide got Louis to teach her about writing, and between lessons they made music of a sort because RLS murdered the piano. He was never any good on either instrument. His attempts rose to the level of evoking pathos, even pity, in his inner circle of friends, but they would not show it.

No one understood this better than Lloyd Osbourne, his stepson. “Speaking of music,” Osbourne says in his introduction to the Tusitala Edition of Stevenson’s works (1924), “I believe that in a certain sense his whole life was starved in one of its essentials. … He bought an extraordinary amount of printed music — Chopin, Grieg, Bach, Beethoven, Mozart — and would pore over it for hours at a time, trying here and there and with endless repetitions, to elucidate it with his flageolet (penny whistle). It was amazing the amount of pleasure he got out of the effort. … The doleful, whining little instrument was one of his most precious relaxations. … The most familiar sound in Vailima (RLS home in Samoa) was that strange wailing and squeaking that floated down from his study. … At no time in his life had he ever had musical friends … he had nothing but his pitiful flageolet and those great stacks of music with no key to unlock them. The longing was there, the hunger, but how poor was the satisfaction.”

By the time Osbourne was writing his introduction, technology had performed wonders, and he mentioned “those wonderful mechanical devices for the reproduction of vocal and instrumental music” and how they came “too late for Stevenson … what a difference they would have made to him. … But all he had was his little penny whistle and the far-away memories of his youth.”

Robert Louis Stevenson’s sudden arrival in Saranac Lake in 1887 had coincided with his sudden rise to fame in America, which brought him more money from his writing than he had ever dared to dream. In his first letter from Baker’s to cousin Bob, across the big, blue ocean, the author of “The Strange Case of Dr. Jekyll and Mr. Hyde” shared his thoughts about wealth. “Wealth,” he said, “is useful for only two things — a yacht and a string quartette.” If RLS was here today, he would probably say “a yacht and a monster home theatre — for these two I would sell my soul.”