Weevil in a biscuit, part I 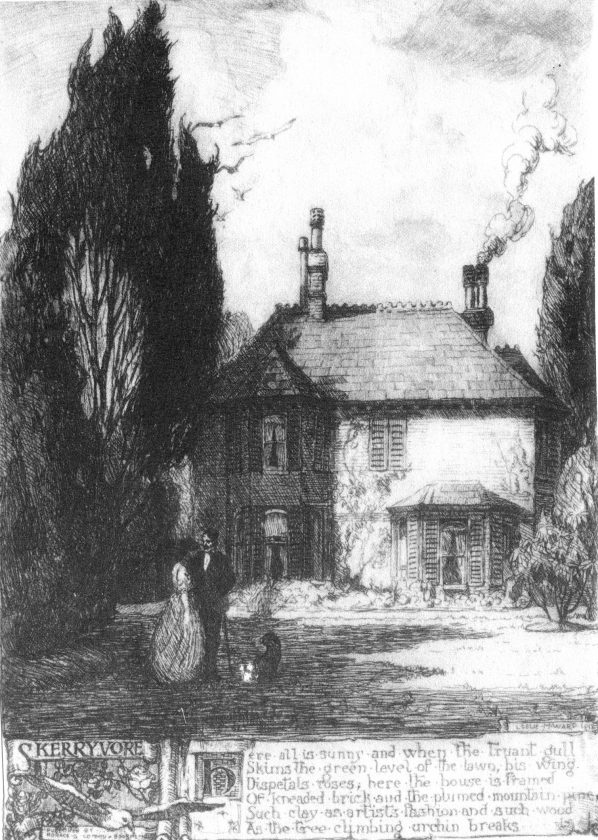 “Remember the pallid brute that lived at Skerryvore like a weevil in a biscuit.” — RLS to Henry James, 1889

The three years, 1884-87, that Robert Louis Stevenson spent in Bournemouth, England, living in a brick, ivy-covered house he called Skerryvore, proved to be the Scottish author’s worst years yet for his health, or lack of it. What had started as a slight cold in Nice, France, in January 1884 had intensified into a prolonged bout with worse-than-usual bad health for someone who was already chronically ill.

Louis wasn’t asking for too much out of life. He just wanted to write and be good enough at it to support his family by it. More than once he would be heard to say, in so many words, that “my art” was the only thing that kept him willing to continue suffering the debilitating and life-threatening side effects of his disease that was not tuberculosis, contrary to popular belief.

When the Stevenson expedition had been wintering in the Swiss Alps, Louis had tried his hand at carving woodcuts as a way to occupy himself when he was feeling “seedy.” He said, “I cannot tell you what a godsend these silly blocks have been to me. When I can write no more and read no more and think no more, I can pass whole hours engraving these blocks in blissful contentment.” However, the toy press that RLS used to print the blocks had broken beyond repair by the time they relocated to southern France in late 1882. As a replacement therapy, Louis took up modeling figures in wax or clay, and continued this new hobby upon moving to Bournemouth. Not a single one of his creative attempts has survived, probably because they weren’t worth keeping. But someone did keep his modeling tools and brought them to Saranac lake a long time ago to join the memorabilia that the Stevenson Society of America hoards in their little white house on Stevenson Lane.

In spite of his invalidism, Stevenson did manage to squeeze in a rewarding social life with a few of his new neighbors. Friends were perhaps the most significant feature of life at Skerryvore for Louis, who said in his first book, “Travels with a Donkey in the Cevennes,” “We are all travelers in the wilderness of this world; and the best that we find in our travels is a friend.” Henry James, American expatriate and master novelist, played that role magnificently as the most frequent and welcome guest at Skerryvore, with his own sumptuous blue chair named after him because he used it so much. Fanny, Stevenson’s wife, liked him, too.

For people who follow English literature, it often comes as a surprise to learn that RLS and Henry James got on so well. They were so different, so unlikely a pair, that writing seemed to be all that they had in common, but that, of course, was the connection. Both took writing as a form of art more seriously than most of their contemporaries. The two men had been each aware of the other through literary gossip, and Louis had been indifferent until he picked up a copy of Longman’s Magazine, September 1884, and read an article by James called “The Art of Fiction.” Stevenson had to respond, so when James picked up his December issue of Longman’s, he read “A Humble Remonstrance” by Robert Louis Stevenson. They became pen pals immediately, since James was still living in France, but when James moved to Bournemouth in 1885, they finally got to shake hands and Henry sat down in his big blue chair for the first time. In 1922, Sam McClure, Stevenson’s second American publisher, said this while he was addressing a crowd on the lawn of the Stevenson Cottage in Saranac Lake: “One man had just a heartful of love, friendliness and understanding of Stevenson, and that was Henry James. … He was Stevenson’s admirer. His interest in Stevenson’s health, his works, his plans for the future was wholly affectionate, wholly disinterested. … Henry James was Stevenson’s friend and well-wisher. His loyal, generous feeling I have never forgotten.”

After Robert Louis Stevenson settled into his latest home at Baker’s in Saranac Lake in the fall of 1887, he wrote his first letter from his new address to good ol’ cousin Bob, and the next one went to Henry of the blue chair at Skerryvore. For literary types who might be interested, the two articles in Longman’s Magazine, mentioned above, were fuel for a literary debate at the time concerning the nature of novels, what they are or aren’t as an art form. It was provoked by a public lecture called “Fiction as one of the Fine Arts” by Walter Besant. The French naturalists, especially Emile Zola, made a huge ripple in this discussion. An account of all this can still be found in a book edited by Janet Adam Smith called “Henry James and Robert Louis Stevenson, A Record of Friendship and Criticism,” (1951).

Sir Henry and Lady Taylor, neighbors of RLS, also enhanced life for Louis in between his more “seedy” episodes. Sir Henry had a distinguished career as a civil servant in the Colonial Office and was a poet besides who enjoyed some fame in his day for “Philip Van Artevelde” (1834) and other verse dramas. Frequent dinners at the Taylors racked up many good memories for Louis and Fanny Stevenson. Unfortunately, Henry died in his sleep too soon into their friendship, but Lady Taylor and her daughter remained at Bournemouth long after the Stevenson expedition had moved on. Lady Taylor had started out as Theodosia Alice Spring Rice (1817-91), daughter of the first Lord Monteagle. She became a kind and caring friend whom Louis much appreciated and would one day be another one to get mail from Louis with a Saranac Lake postmark.

In the autumn of 1885, Louis and Fanny traveled to Dorchester for a brief change. There he met Thomas Hardy, who was yet to write his best-known works. Local gossip says that Hardy took RLS to the County Museum to see a new and allegedly important acquisition, a large book called “The Civil Division of the County of Dorset,” a 90-year-old “Who’s Who” containing maps, government directories and lists of magistrates. As displayed, the names of two long dead justices of the peace appeared side-by-side — Joseph Jekyll and Thomas Hyde.