Of clocks and calendars 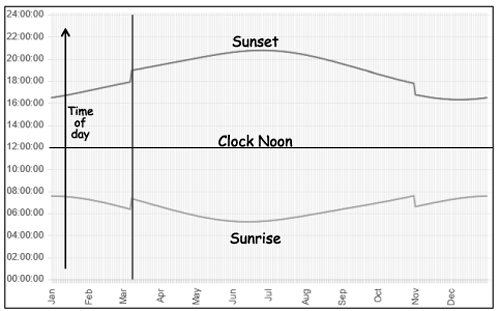 This is a plot of the times of sunrise and sunset (time of day upward from midnight at the bottom) throughout the year for Tupper Lake, showing the adjustments for Daylight Saving Time in March and November. The vertical line represents Monday, March 9.

It’s most likely that none of us has completely adjusted to Daylight Saving Time (DST, or Eastern Daylight Time for us … EDT) after moving our clocks forward an hour early Sunday morning. Each time we change the clocks to daylight time in the spring and back to standard time in the late fall, there are many complaints, as people don’t understand why we change the clocks and think we should stick to either daylight or standard time (Eastern Standard Time, or EST, for us) all year.

I believe that the complaints are due to a lack of understanding of how much the tilt of the Earth makes the length of the day and the times of sunrise and sunset vary. Humans can’t change the tilt of the Earth and, if we could, we shouldn’t unless we want to really raise havoc with the seasons. The time switches are our way of coping with the inevitable and fairly dramatic changes in the number of hours of daylight. The diagram shows the times of sunrise and sunset through the year for Tupper Lake, as well as the adjustments for daylight and standard time.

Thus, for those of us with a day that varies in length by almost seven hours and who prefer some light in the morning (but not too much), staying on either daylight or standard time has drawbacks. For people living farther south, where the seasonal changes in daylight are much less dramatic, changing the time makes little sense. Hence Arizona, as well as Hawaii, Puerto Rico and other island territories do not participate in the time change. But if more of the southern states decided to join Arizona in this, we would have to change time zones traveling north and south, as well as east and west. I’m not sure this would be less inconvenient than almost everyone changing clocks on the same date. But the question is far from settled.

The calendar event we recently experienced was that February had a leap day this year. This does not result in the grumbling that the time change does, though it has inconveniences for those actually born on Leap Day. It is interesting, however, that societies across the world have agreed to adjust our common calendar this way. It is our way of keeping our dates aligned with the seasons in spite of there not being an integer number of days in a year. The tropical year is defined as the time for the sun to return to the same position in the sky — say, from one vernal equinox to the next. This time is carefully measured by astronomers and is 365.24217 mean solar days, or 365 days, 5 hours, 48 minutes and 43.5 seconds. This means that when we celebrated the new year at midnight on Jan. 1, 2020, 365 days after celebrating Jan. 1, 2019, we were actually almost six hours early! The sun wasn’t at the same position in the sky as it had been on Jan. 1, 2019, until almost 6 a.m. on Jan. 1, 2020. Thus, if we didn’t adjust our calendar, Jan. 1 would gradually creep backward by about a quarter of a day per year until it was occurring in the fall, then the summer, then spring and winter again.

Before and during the time of the Roman Empire, calendars were a constant source of confusion due to the fact that there are neither an even number of days nor an even number of months in a year. The Islamic calendar is a lunar calendar with a year defined as 12 lunar cycles. With 29.5 days from new moon to new moon, 12 lunar cycles add up to 354 days, 11 days shorter than the tropical year. This is why the Islamic months, such as Ramadan, move through the seasons. This year, Ramadan will start on about May 5, but the start is not certain until the new crescent moon is actually observed.

Julius Caesar — aided by Sosigenes of Alexandria, a Greek astronomer from Ptolemaic Egypt — rounded the number of days in the tropical year to 365.25 (365 days, 6 hours) and instituted a leap day every four years. This worked well for many centuries, but the 11-minute-and-16.5-second difference between the actual 5:48:43.5 hours and 6 hours added by leap days did eventually pile up. Since we added extra time to our calendar every year, the dates gradually crept forward relative to the seasons, making the seasons seem to move backward through the calendar. By 1582, the vernal equinox had shifted to March 11.

The solution that Pope Gregory XIII instituted, as the Gregorian calendar, had two components:

1. Drop 10 days from the calendar to get the vernal equinox back to March 21, where it was during the First Council of Nicaea in 325 AD.

2. Century years not divisible by 400 would not have leap years.

Imagine getting that first reform through today’s Congress instead of the pope’s decree of 1582 or the British Parliament’s Calendar Act of 1750, that brought the American Colonies into the Gregorian Calendar. The second reform makes the Gregorian year 365.2425 days long, still slightly longer than the tropical year of 365.24217 days. Thus we continue to add slightly too much time, but only 28.5 seconds per year. With this calendar, the vernal equinox will move one day earlier every 3,030 years instead of every 128. Perhaps a legislature in 4612 will feel the need to drop a day from the calendar to keep the seasons and dates aligned!

Though calendar reform is not a hot topic these days, everyone has an opinion about changing the clocks. And half an hour after sunset, at whatever time it occurs, the astronomers of the Adirondack Sky Center and Observatory are happy to show you celestial wonders through their telescopes at the Roll Off Roof Observatory (RORO) above Little Wolf Pond in Tupper Lake. We have public stargazing on the first and third Fridays of each month during the winter if it’s clear. Please check our website at https://www.adirondackskycenter.org and our Facebook page for updates on the weather and whether we will open. You can sign up for email updates on observing, and on our public observing days you can call the RORO at 518-359-6317 to talk with one of our astronomers.