Figure 1: “Orion Head to Toe” image by R. B. Andreo. A mosaic of images in visible light combined with light from glowing hydrogen taken over 28 hours in October 2010. It shows the rich molecular clouds from which the prominent stars of Orion formed. More continue to form. (Provided image — deepskycolors.com)

Figure 2: Image of Orion in infrared light obtained by the Infrared Astronomical Satellite (IRAS) combined with the light of glowing carbon monoxide with coponents labeled. The bright stars making up the constellation glow primarily in ultraviolet, so only Betelgeuse is prominent in this image. (IRIS, Dame, et al, 2001, Meli Thev (Wikipedia Commons license) 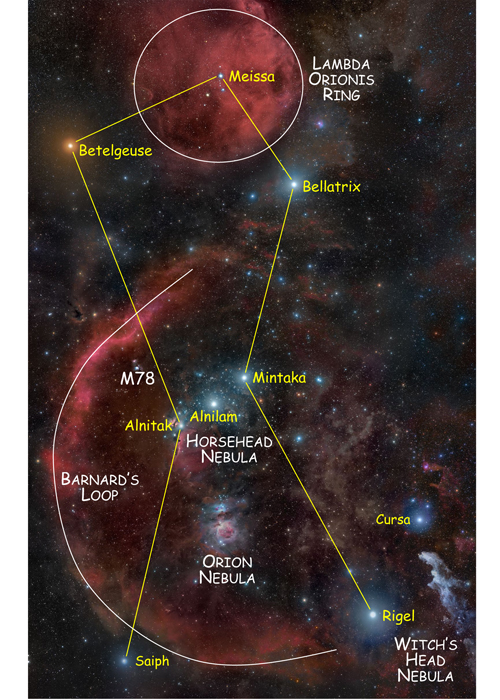 Figure 1: “Orion Head to Toe” image by R. B. Andreo. A mosaic of images in visible light combined with light from glowing hydrogen taken over 28 hours in October 2010. It shows the rich molecular clouds from which the prominent stars of Orion formed. More continue to form. (Provided image — deepskycolors.com)

On Feb. 17, Edward Guinan of Villanova University, who has been closely watching Betelgeuse, reported that it has stopped the dimming I described in my column of Feb.1. It is remarkably dimmer, 36% below normal, than any of us have ever seen. Astronomers now expect the giant start to slowly brighten again as it has done regularly for as long as we’ve known it. All astronomers can do is wait and see. In a way, astronomers are the most passive scientists because we can’t actively experiment with the cosmic objects we study. All we can do is watch them. Of course, this doesn’t mean astronomers don’t work, our watching certainly requires a great deal of work to build instruments, observe with them, and analyze the data! Ultimately, though, all we do is watch, and sometimes even very familiar objects surprise us as Betelgeuse has over the past three months.

The great constellation of Orion, however, is worth more examination than just one dimming star. The fact that Betelgeuse is only about 10 million years old means there’s lots going on in this region of the sky. After all, Earth is 4.5 billion years old … 450 times older than the giant star. When Betelgeuse formed, Earth was 99.8% of its current age as the now extinct Dinohippus, “terrible horse,” began its 6.6 million year history in North America. If these horses observed Orion, they would have seen Betelgeuse as a young, bluish-white star, not the red giant it is today. It would have appeared much like the stars in Orion’s belt do to us. These stars are Alnitak (all-KNEE-talk), farthest left, Alnilam (all-KNEE-laam) in the center, and Mintaka (min-TALK-ah) to the right. All are younger than Betelgeuse with the left two about 6 million years old and Mintaka a mere 3 million years old. In another 4 million years, the left two will have expanded into giants rivaling Betelgeuse. Unfortunately, Betelgeuse will have long since disappeared in a spectacular supernova explosion and most likely left its core as a tiny neutron star no more than 10 miles across.

The natural question to ask is where these young, short-lived stars are coming from to shine in the Hunter who guards our winter skies. The answer lies in plain sight, but glows too faintly for our eyes, even aided by large telescopes, to see. However, long exposures such as the image in Figure 1, “Orion, From Head to Toe” created by Rogelio Bernal Andreo reveal a region rich with molecular clouds from which stars are forming. The image is a mosaic of images taken over a span of 28 hours in October 2010. It was the Astronomy Picture of the Day on Oct. 23, 2010 (https://apod.nasa.gov/apod/ap101023.html). Viewing it in color reveals the richness of the clouds. Much of what we see glowing is the characteristic red of hydrogen heated by nearby and embedded stars.

Representing the head of Orion, the Lambda Orionis Loop named for Meissa (MAY-suh, also known as Orionis), is thought to have been formed by a supernova explosion two million years ago. Figure 2 shows the Orion molecular cloud complex in infrared (IR) light combined with light from carbon monoxide (CO), a common molecule in cosmic clouds. In this image, it’s clear that Meissa is near the center of a bubble even though the star itself and the red hydrogen gas have disappeared. All the familiar bright stars of the constellation glow at much higher temperatures than the material visible in IR, making the region appear remarkably different. This is why it is important for astronomers to observe objects in every type of radiation. Meissa itself is actually two stars orbiting each other with the larger one, Meissa A, about 28 times more massive than the sun. Its surface temperature is 35,000 K so most of its light is emitted in the ultraviolet (UV), making it appear blue to us. The amount of energy this star emits is 165,000 times greater than the sun and is what has heated the gas in the ancient supernova bubble to cause the red glow in Figure 1.

To the left of Orion’s belt and legs, Barnard’s Loop is the eastern edge of an immense superbubble created over the past 10 million years or so by the combined stellar winds of giant young stars and their early deaths in supernova explosions. The lifetime of a star is determined by its mass and giant stars like Betelgeuse, Meissa, and the stars of Orion’s belt live much shorter lives than smaller stars like the sun. The western edge of the superbubble is in the neighboring constellation of Eridanus whose second brightest star, Cursa, is near Orion’s lower knee marked by Rigel. The entire superbubble is about 1,200 light years across. 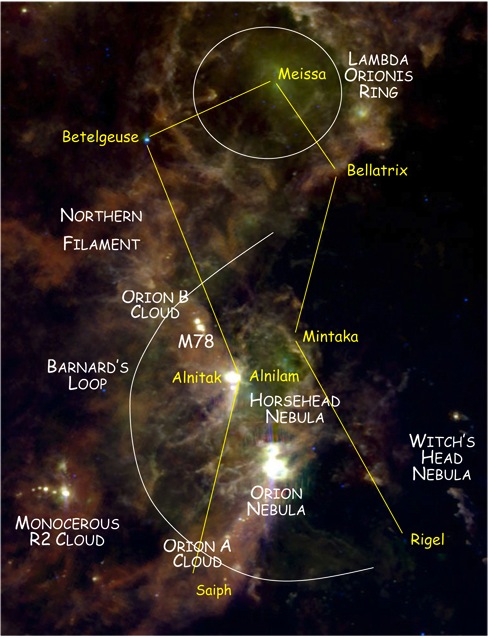 Figure 2: Image of Orion in infrared light obtained by the Infrared Astronomical Satellite (IRAS) combined with the light of glowing carbon monoxide with coponents labeled. The bright stars making up the constellation glow primarily in ultraviolet, so only Betelgeuse is prominent in this image. (IRIS, Dame, et al, 2001, Meli Thev (Wikipedia Commons license)

Within the superbubble lie the very striking nebulae of Messier 78 (M78), the Flame and Horsehead near Alnitak, and the Orion Nebula that we see as part of the hunter’s sword. Just west (right) of Rigel is the blue Witch’s Head Nebula. M78 also appears blue. This is due to gas scattering the blue light of nearby stars in the same process that makes our daytime sky appear blue. The red light from the stars and sun passes straight through the gas, but the blue light is absorbed by the gas and reradiated in random directions, some of it coming toward us.

The Horsehead nebula, a tiny shadow in Figure 1 just left of the H of its name, is a dense portion of cloud in which stars are forming. IR images from the European Southern Observatory (ESA) show it and the flame nebula to be connected and young stars embedded within it. Google “ESA Flame and Horsehead” to find a three panel image of the nebulae.

The Orion nebula in the sword is the one we can see with our unaided eyes. It lies at a distance of about 1350 light years, is 24 light years across, and is made up of gas and dust equivalent to about 2,000 times the mass of the sun. Even a modest telescope can resolve the brightest stars within the nebula. There are about 28,000 stars within a 10 light year radius of the center. High resolution images by the Hubble space telescope have allowed us to see stars and their planetary systems in the process of formation, confirming our theories of how they form from dense clouds collapsing under the relentless pull of gravity. These images have also revealed how the immense energy output and gravitational interactions of the forming stars can cast some of them out of the cluster to form “runaway” stars. Our friend, Betelgeuse, was actually thrown out of the cluster that includes the Belt stars and is plowing up a bow shock 4 light years across as it flies through the molecular cloud.

The astronomers of the Adirondack Sky Center and Observatory can show you lovely details of the Orion and surrounding nebulae as well as more distant celestial objects at the Roll Off Roof Observatory (RORO) above Little Wolf Pond in Tupper Lake. We have public star-gazing on the first and third Fridays of each month during the winter if it’s clear. Please check our web site at https://www.adirondackskycenter.org and our Facebook page for updates on the weather and whether we will open. You can sign up for email updates on observing and, on our public observing days you can call the RORO at 518-359-6317 to talk with one of our astronomers.