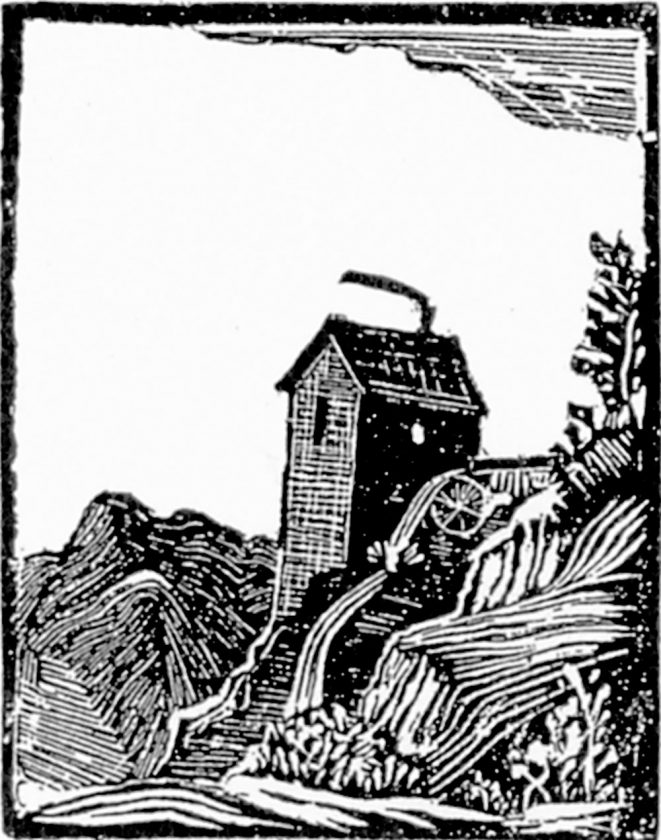 “The Precarious Mill,” a woodcut by Robert Louis Stevenson

“Saranac Lake, as well as the Stevenson Society, is to be congratulated on acquiring, after weeks of effort, perhaps one of the greatest Stevenson relics in existence and which, as soon as it is delivered here by the Boston Public Library, upon orders from Stevenson’s step-son, Lloyd Osbourne, will be placed on public exhibition at the Stevenson Cottage as a gift to the Society and an added attraction to the town.”

It was 1916. World War I was in full swing, pounding the fortress town of Verdun, in France, when the Adirondack Enterprise ran this article featuring the latest cultural jewel in Saranac Lake, the Robert Louis Stevenson Memorial Cottage and its famous collection of Stevenson memorabilia. The nucleus of the brand-new, first-of-its-kind Stevenson Society consisted of surviving members of the author’s innermost circle of friends and family — notably, Sir Sidney Colvin, Sir Edmund Gosse, Dr. Graham Balfour, Lord Charles Guthrie, Will Hickock Low and, even more notably, his stepchildren Lloyd Osbourne and Mrs. Isobel Field. Only Lloyd and his sister, better known as “Belle,” were with “Tusitala,” their stepfather’s island nickname, when his end came suddenly at his home in tropical British Samoa. That was in 1894, when the self-exiled Scottish writer was only 44.

This series of articles called “The Hunter’s Home: Robert Louis Stevenson and the Saranac Connection” is partly the combined testimony of these individuals, who felt the urge along with his fans to create a memorial of some kind, to a “spirit intense and rare,” in W.E. Henley’s words, whose initials, RLS, are revered around the world. Is it not suitably Stevensonian that it should have happened here, in the farmhouse of a pioneer family in an Arctic wilderness called the Adirondacks, a place Louis called his “Hunter’s Home”?

The Enterprise continues: “While Stevenson was ‘taking the cure’ at Davos-Platz, Switzerland (winter of 1880-81 and 1881-82) he and Lloyd Osbourne, who was then the lad for whom he was writing ‘(Treasure) Island,’ spent their days amusing themselves by doing ‘neat job printing’ with a toy printing outfit. They called themselves in make-believe L. Osbourne & Co.”

The toy press they were using was the same one that Lloyd had played with in California, when he was camping out on the slope of Mount St. Helena at an abandoned mine with his mother and his new stepfather, and you can read all about it in “The Silverado Squatters” by RLS. That was in the summer of 1880. By that fall, the press was prime luggage for Lloyd as the family migrated to Davos, Switzerland, for the winter, another phase of the never-ending mission to keep Louis alive. There the gang of three plus Bogue, a Skye terrier, took rooms at the Hotel Belvedere where Lloyd, only 12, went into business using his press. The hotel needed 100 programs a week for its Saturday night concerts, and S.L. Osbourne & Co. got the contract. There were charity bazaars, too, and public invitations, announcements and letterheads. Once Lloyd had a colossal order for 1,000 lottery tickets.

Naturally, Louis took up an interest in Lloyd’s enterprise, so the latter granted him a partnership but kept the firm’s name as it was. Soon RLS submitted his first manuscript called “Not I, and Other Poems,” which was an instant hit, selling out an entire edition of 50 copies in a single day. Louis was hooked, and he wanted more. Printing only words wasn’t enough; now he wanted illustrations to go with them. Accordingly, Lloyd obtained suitable wood blocks for carving from a dying Swiss carpenter and consumptive. To Lloyd, it seemed like everybody in Davos was dying, and yet they were calling it a resort town. He brought the woodcuts to his stepfather, who had never carved anything in his life.

In the preface of “Moral Emblems and Other Poems, Written and Illustrated With Woodcuts by Robert Louis Stevenson,” Osbourne said, “Well, Louis cut out a small square of fretwood, and in a deeply-thoughtful manner applied himself to the task. He had only a pocket-knife; real tools came later; but he was impelled by a will to win that carried all before it.” And that’s how the woodcuts on display at Baker’s to this day came to be. One winter day in Davos, Lloyd overheard his stepfather confide to a visitor: “I cannot tell you what a Godsend these silly blocks have been to me. When I can write no more, and read no more, and think no more, I can pass whole hours engraving these blocks in blissful contentment.”

Eighteen of these blocks currently rest in the space where RLS did his most serious writing in Saranac Lake, which was in bed in the mornings, just like he is depicted in the famous bas-relief by the sculptor Augustus-St. Gaudens. To continue with the 1916 article: “For twenty years few persons have known where they were and so rare were even prints of them that even a single proof was listed the other day at $60. What the originals which are coming to Saranac Lake may be worth is left to the imagination.”

To Lloyd Osbourne goes the credit for rescuing these crude works of art from obscurity.

“I mention the blocks for a special reason,” said Osbourne at the Saranac Lake Free Library in February 1917. “I am very happy to think they have come at last to Saranac Lake and I have a hope that many who are in this town under circumstances not unlike those that surrounded Mr. Stevenson may gain some inspiration and encouragement from a study of them and from some reflection on the spirt that urged their creation.”