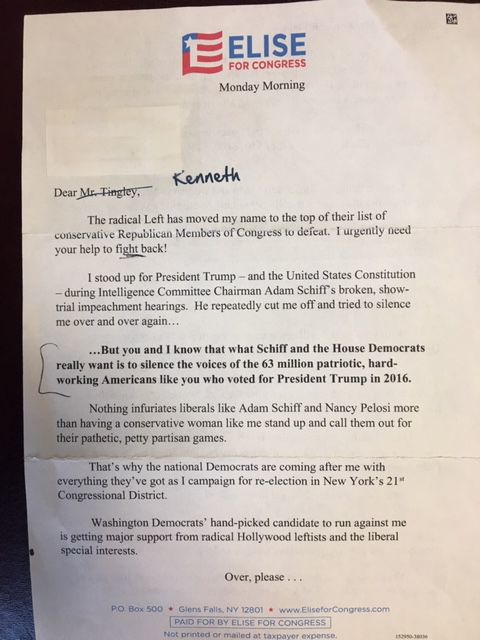 Rep. Elise Stefanik’s recent direct mail plea for voters in the 21st Congressional District to give her money was astounding for its “us against them” tone.

We’re all used to receiving political mailers in which candidates tout their accomplishments and positions on key issues while asking for support, but this was something different.

This was uglier in its characterization of our political times as a civil war with her under siege from Washington, D.C., Democrats.

Her description of the Democratic Party’s vision portrays an Armageddon of sorts for the voters in her district.

“I urgently need your help to fight back,” Rep. Stefanik writes in the very first paragraph of her 1,000-word, four-page letter that includes multiple pleas for your cash. It was as if Fort William Henry had been attacked by Adam Schiff. 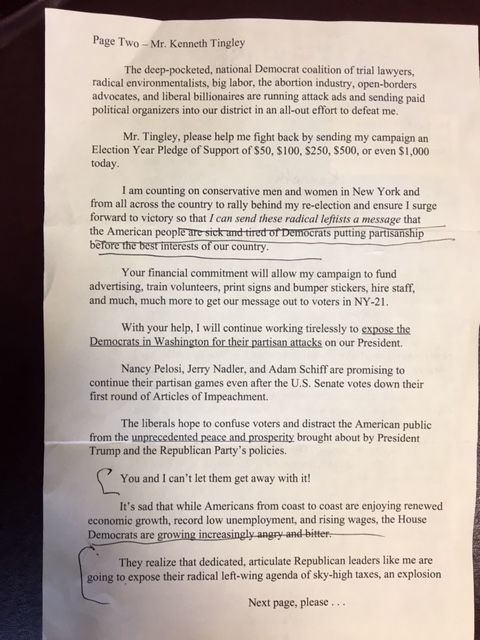 Considering Rep. Stefanik raised $1 million more than her opponent in the last quarter of 2019, her pleas of poverty seem a bit misplaced. It’s like when your well off brother-in-law fails to pick up the dinner check — again.

But that’s not the worst of it.

Her negative characterization of those enrolled in the other political party includes everything but a description of a tail and horns.

Stefanik writes that national Democrats are coming after her with “everything they’ve got.” 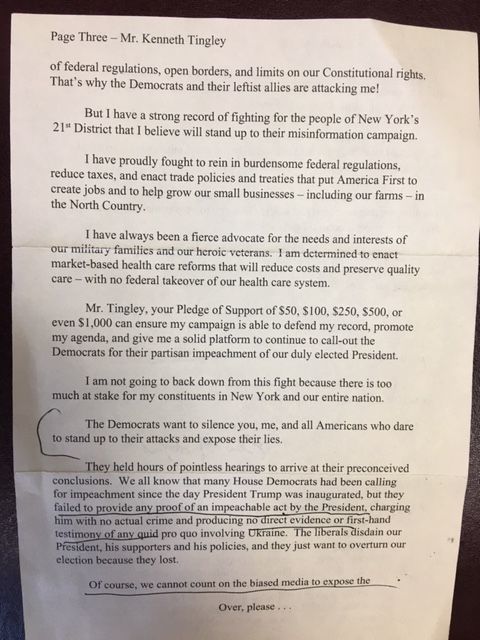 Thank goodness, the “boogie man” belongs to the Green Party.

Considering all those people descending on our region, I’m guessing this will be good for the hotel business.

Stefanik says the Democrats want to “silence you, me and all Americans who dare stand up to their attacks and expose their lies.”

What’s remarkable is that it was Rep. Stefanik who refused to make a pledge not to lie in either of her past two campaigns, although her opponent did.

There are 11,724 registered Democrats in Warren County. 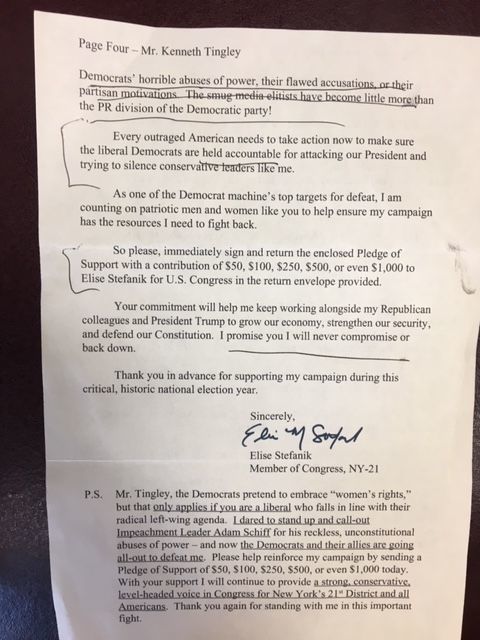 There are another 9,549 registered Democrats in Washington County.

From Rep. Stefanik’s letter, there is only one conclusion you can draw. There are more than 20,000 individuals — friends and neighbors in our communities — whom she believes are her enemies.

That’s a lot of hate for any one person.

Perhaps, Rep. Stefanik will propose that these Democrats have small donkey decals affixed to their front doors so we know who they are and can keep our children away from them.

I’m not sure who writes this tripe for the congresswoman, but her fear-mongering is a reminder of the McCarthyism of a generation past. This is the world that Rep. Stefanik is bringing here from her time in Washington.

Rep. Stefanik’s message is that our fellow Americans are an enemy that needs to be defeated.

That their opinions do not matter.

Even if they are next-door neighbors.

We didn’t see this when Chris Gibson was our congressman.

We didn’t see this when Scott Murphy was our congressman.

I don’t know if we have ever seen such a divisive message perpetrated upon the electorate.

She concludes by “counting on patriotic men and women” to fund her campaign, so she can fight back.

By the end of the letter, I wasn’t sure whether she would be buying campaign ads or bullets.

Ken Tingley is the editor of The Post-Star of Glens Falls and may be reached via email at tingley@poststar.com.

“Four months ago, I unequivocally condemned violence against the press at a community event in Hudson Falls. The Post Star News Editor, Ken Tingley, was in attendance during this statement. Unfortunately, Ken Tingley’s column today ends with a dangerous allusion to gun violence and has no place on the pages of a serious community newspaper. He likens a typical campaign fundraising appeal describing Democrat attacks on President Trump supporters by saying he wasn’t sure if I would be buying campaign ads or bullets. This call to gun violence is shameful, untrue, and dangerous.

“This news editor is well aware of the impact of his words, and it is completely unacceptable. Over the weekend, the same editor published a column accusing me of cheering on violence against the press and of refusing to condemn such violence. This editor knows very well I have unequivocally and strongly condemned threats of violence of any kind, specifically against journalists. We can all respectfully and passionately disagree on policies, but allusions to threats of violence — as Tingley does today — have no place in our community discussions or in print. Readers of our community papers deserve better, and Tingley should apologize for this unacceptable error in judgement.”

Asked about Stefanik’s call for an apology, Tingley responded to the Enterprise by email:

“After it was reported last October that her campaign manager asked a man who threatened The Post-Star and one of its reporters to help provide support for a Stefanik town hall meeting in Kingsbury, I reached out to the congresswoman in an email. I wrote that I was shocked she would join forces and give legitimacy to a man who had made public threats against the newspaper and one of its female reporters.

“I told her those threats had made many at our newspaper — from the receptionist and obit clerks to those in our advertising department — nervous about their safety. I asked her to denounce the actions of her campaign manager and renounce any affiliation with this man. I also suggested she visit our newspaper since she was going to be in town that day and explain to the regular workers with families why she had contributed to their danger.”

Tingley said he never got a response of any kind from Stefanik or anyone in her office about her campaign’s involvement with the man who made the threats.